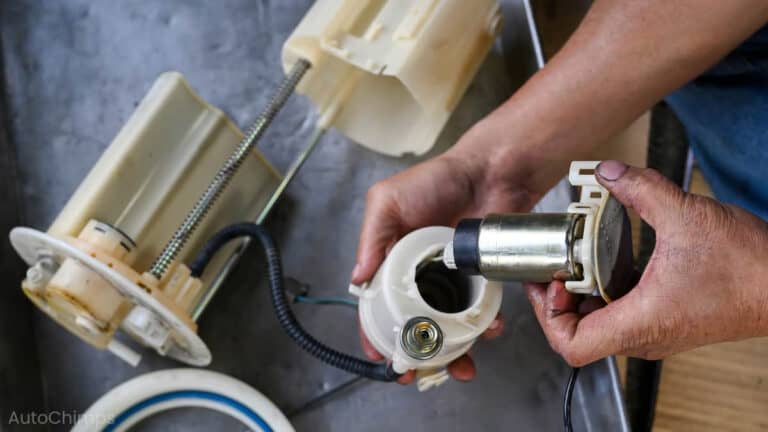 The fuel pump enables the engine to produce power by delivering the fuel from the fuel tank to the combustion chamber.

Without fuel and a fuel pump, the engine will not produce power, and your car won’t go anywhere far.

Because of the vital function of the fuel pump, if it turns bad, it may lead to a variety of problems which almost always will be noticeable when driving.

This guide will go through the most common symptoms of a bad fuel pump.

We will also cover the cost of fixing the problem and other potential causes that may cause the problems.

Find out everything about the fuel pump down below!

While it is straightforward for most people what the fuel pump does, some details are good to know, such as how to prevent the fuel pump from failing and where it is located.

When diagnosing a fuel pump problem, this poses a problem, as many symptoms associated with a bad fuel pump are also seen in other parts of the fuel system.

When it comes to the location, the fuel pump is located in the fuel tank (except in vintage cars that use carburetors).

Because of that fact, you should try to prevent the car from running low on fuel as this will put higher stress on the fuel pump, which can make it go bad prematurely.

When the fuel pump goes bad, there are a variety of symptoms that will appear; some are relatively common, while others are rare but still important to know.

All the mentioned symptoms will be covered, including some tips on how you can further evaluate if the fuel pump is in question or something else.

When the car accelerates, it needs extra fuel to accommodate the increased demand for power.

If the fuel pump does not deliver a sufficient amount of fuel, you may experience poor acceleration, which may include jerking.

In many cases, this type of “power loss” will also trigger limp mode, electronically limiting the engine’s power to prevent further damage.

If this happens, getting your car to your planned destination should be safe. If you feel worried or hear some strange noises, it may be better to stop the vehicle and call for help.

There is also a possibility that the limp mode will disappear if you turn off and turn the car back on. At the same time, the limp mode may engage once you accelerate a bit harder.

For the same reason, poor acceleration may be experienced, and a general power loss may be present as well.

In this case, the fuel pump is usually in a worse condition, but other causes may be due to the fuel filter, a bad MAF sensor, or a bad throttle body.

A rough idle can be seen when the fuel pump is not working as it should.

It can be observed both when starting the car or a while after, for example, at a stoplight.

You may notice the rough idle by the engine’s sound or by observing the tachometer, which shows the engine’s RPMs.

It is a relatively common sign of a bad fuel pump; however, just like any other signs and symptoms listed, a few other potential culprits in the fuel system may cause a rough idle.

Rough idle is not exclusive to problems within the fuel systems. Bad spark plugs and various sensors can likewise be the problem.

We will cover how best to differentiate causes at the end of the guide.

When you turn the ignition on, you may normally hear a little whining noise as something is turning on.

The noise is the fuel pump turning on to get the initial amount of fuel into the combustion chamber.

Here, an essential component called the fuel pump relay enables it to work as it provides an electrical current.

If you do not hear this normal humming sound, the fuel pump is most certainly not pumping the fuel, and hence, the engine cannot start.

Just like other symptoms listed in this guide, multiple possible reasons exist for why your engine is not starting.

When there is difficulty starting the car, the cause is usually clearer in the light of other symptoms present.

For example, a car that does not start due to the battery will have no electricity at all or just the bare minimum to illuminate the dashboard lights.

An engine that stalls out of nowhere may be very dangerous.

When it comes to problems with the fuel pump, there is a possibility that the engine will stall.

Nevertheless, it is uncommon as there are usually many symptoms occurring prior.

To prevent the car from stalling due to a bad fuel pump, it is important to immediately resolve any problems that may suggest a problem with the fuel system of the car.

This does not mean that you should disregard the fuel pump as the cause of the stall, as the possibility is there.

It would be best always to contemplate any previous symptoms that may have occurred before the stall. If fuel-related symptoms occurred before, the fuel pump might be the culprit.

You may recall that the fuel pump typically makes a noise when turning on the ignition and starting the car.

If the sound it makes is out of the ordinary, the fuel pump is most probably on the verge of giving up altogether.

A fuel pump that produces no sound at all is also a reason for concern and points to a problem with the fuel pump.

As you may have noticed, many of the signs of a failing fuel pump can also indicate something else is wrong.

You can take some steps to differentiate the causes further to ensure that the fuel pump is the cause.

The most significant asset is having an OBD2 scanner or reader when differentiating between the potential culprits. With the latter, you may only read the codes, and some allow clearing them.

On the other hand, you may read advanced parameters with scanners, which can provide great value.

Keep in mind to always check that the fuses and the fuel pump relay are working correctly.

A great tool is a fuel pressure gauge tester. Hook it up and turn the ignition on. The gauge should show a relatively constant pressure that is above 30 psi.

If the gauge shows slight pressure or the pressure is rising slowly, the fuel filter is probably clogged.

At last, contemplate all the symptoms and their potential causes. Do they all point to the fuel system, or may something else, like the spark plugs, be the problem?

The cost of a fuel pump varies greatly depending on the car model and the engine.

To give a rough estimate, a fuel pump will cost around $100 to $350, but the price may be higher, especially if you are buying an OEM fuel pump.

When it comes to labor, it also comes down to the car model, as some models require the fuel tank to be dropped, which requires additional work.

Other cars are easier to work with as they have a dedicated access panel. Consequently, they are not very labor-intensive.

Typically, a fuel replacement takes about 2 hours, but just like the price of a fuel pump, the time can deviate up and down depending on the car model and the repair shop you are taking it to.

In total, a fuel pump replacement costs about $450 with parts and labor.

An aftermarket fuel pump at a lesser-known repair shop is the cheapest, while buying an OEM fuel pump and changing it at a dealership is the most expensive option.

When you have replaced your new fuel pump, or if it turns out that the fuel pump never was the problem, it is good to know that you can protect your fuel pump from going bad.

A great step to protect the fuel pump from going bad is never to allow your car to have a small amount of fuel in the fuel tank.

This is because the fuel cools the fuel pump down, which protects it and reduces its stress.

The other thing you should do to protect your fuel pump is regularly change the fuel filter. A dirty and clogged fuel filter will make it harder to pump the fuel, which will take a toll on the fuel pump.

It is only one additional reason why it is crucial to maintain your car correctly and follow the recommendations on when to change each part.

In the long run, you will save a lot of money with proper maintenance, as it will protect and prevent other parts from going bad.

A car’s fuel pump is an important part that plays a pivotal role in delivering fuel to the combustion chamber.

In most cars, the fuel pump is in the fuel tank, where it pumps the fuel but also gets cooled down by the fuel itself.

A bad fuel pump will show symptoms that successively get worse in most cases. If you can, make sure to resolve any symptoms as soon as possible.

Ensure that the fuel pump is getting enough voltage; if not, the problem may be as simple as a blown fuse or a bad fuel pump relay.

Most of these symptoms are not exclusive to bad fuel pumps. Therefore, it is important to look at the whole picture of the signs and symptoms.

It is also recommended to have an OBD2 reader, which can point you in the right direction where the problem lies.

You will also come a long way with a fuel pressure gauge tester and check if there is any pressure in the fuel system.

If you feel that there are faulty fuel pump symptoms that do not go in hand with other signs and symptoms, you might have another problem in addition to the fuel pump.

There is also a possibility that the fuel pump is not the culprit at all.

Luckily, we at Auto Chimps have covered all the symptoms in detail throughout our articles so you can differentiate the potential culprits.

Use the search bar on the top right to find other potential causes for your symptoms.

Last but not least, make sure to maintain your car regularly.

A great way to make your fuel pump last longer is to avoid driving on a near-empty fuel tank and prevent the fuel filter from getting clogged by replacing it regularly. 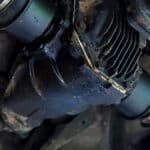