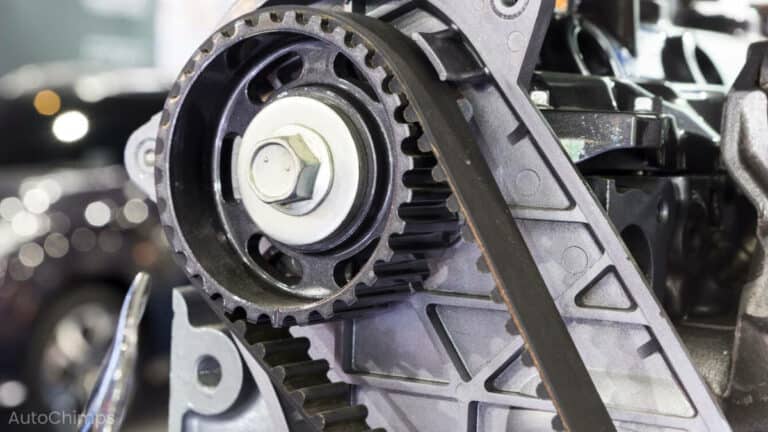 The timing belt is one of the most important parts of an engine. You risk expensive repairs in the thousand-dollar range if your timing belt is damaged. Fortunately, the risks can be minimized.

If your timing belt is going bad, you might notice some symptoms, including:

These symptoms vary in terms of how serious they are. However, whichever symptom you notice, you should change the timing belt as soon as possible to protect your engine from any further damage.

What Is A Timing Belt?

Before we take a closer look at the symptoms and the timing belt replacement cost, let’s look at what a timing belt is.

Not every internal combustion engine car has a timing belt; some have timing chains instead. The most significant difference is in the materials, as the timing belt is made of durable rubber, while a timing chain is made of metal.

They both serve the same purpose and work by the same principle. They connect to the crankshaft and camshaft, allowing them to be synchronous and making the engine run smoothly.

In short, the timing belt makes sure the intake and exhaust valves open when the pistons in the cylinder are in their lower position and vice versa.

By doing this, the engine can produce power efficiently and also ensure that the valves and pistons don’t collide and cause critical engine damage.

For more details on the entire process that makes your car move, take a look at our guide explaining how a car engine works.

The timing belt is also connected to the water pump, which means it will affect not only the pistons and the valves but also the cooling of the engine.

What Are The Symptoms Of A Bad Timing Belt?

As mentioned previously, many symptoms can appear when a timing belt goes bad. However, you should keep in mind that timing belts and chains should be replaced at regular intervals specified by the car manufacturer.

This is important as it is possible that the timing belt will abruptly break, causing damage that can lead to a very expensive repair bill.

Generally, modern vehicles have timing belts that last up to 100,000 miles. It is also recommended to change the water pump alongside the timing belt, as it can be very time-consuming to access the compartment.

If you have not hit the threshold for changing the timing belt but experience any of the following symptoms, you should get it checked as soon as possible.

Ticking Noise From The Engine

A ticking noise from the engine could be a sign that the timing belt is getting worse and is due for a replacement.

The ticking could also be due to low oil pressure or an inadequate amount of oil in the lubrication system.

Therefore, if you notice a ticking noise from the engine, ensure that all the car’s fluids are filled up and that there is no oil leakage.

As the timing belt plays a pivotal role in synchronizing the power production process in the engine, it’s logical that a bad timing belt may lead to desynchronization, causing misfires.

This symptom can also be caused by many other issues. Even so, it is important to diagnose the problem as soon as possible to prevent any unnecessary engine damage.

Excessive Smoke From The Exhaust

During winter, it is normal to see vapor coming from the exhaust. However, if you notice an abnormal amount of smoke leaving the exhaust, it could be a sign of a bad timing belt.

This can happen as the exhaust valves open and close in a disordered manner, leading to abnormal exhaust gases.

Engine Not Turning Over

There may be other reasons why your car does not start. If the odometer shows a mileage that is below the regular service interval for a timing belt, the culprit is likely something else.

An extremely serious side effect is damage to the pistons or valves. If this occurs, it is too late to do anything other than repairing the components, which is unfortunately expensive.

If the timing belt is faulty, the piston may hit the closed valves at full force, damaging both the valves and pistons.

This could occur while you are driving, which can be a very scary and dangerous situation. It is, therefore, extremely important to adhere to the service intervals and change the timing belt when it is due.

This problem will cost several thousand dollars to repair, excluding the timing belt replacement. It is also very possible that the whole engine will need to be scrapped.

Ideally, a replacement will take place before any symptoms appear. Your car’s manufacturer specifies the interval for changing the timing belt, and it should be strictly followed.

When it comes to the timing belt replacement cost, the greatest expense is the labor cost, as many parts must be disassembled to access the timing belt.

This is also the reason why it is recommended to replace the water pump, tensioners, and pulleys when changing the timing belt. Paying similar labor costs for a water pump two months later would be pointless.

In terms of parts, on average, a timing belt will cost you between $30 and $50. As with all car parts, it depends on the specific model you drive.

As previously stated, it is wise to also change the water pump, tensioner, and other components, which will increase the repair cost, but it is far more budget-friendly in the long run.

There are timing belt kits that you can buy, which include pulleys, tensioners, a water pump, and all other components that are recommended to be changed with a timing belt replacement.

These kits vary by price but are usually cheaper than buying each part individually. Expect to pay anywhere from $150 to $500 for a timing belt kit.

The work is very labor-intensive, and unless you are extremely comfortable with cars and have the tools available, you should not do it by yourself.

Because of the extensive work, the labor cost is, on average, $300 to $500. Again, this is why you should replace other components in the same area and save money on the potential labor costs.

To summarize, the cost of replacing the timing belt will set you back $500 to $1000 but could be less (or more) depending on your car model and whether you decide to replace other components (which you should).

The timing belt should always be changed before symptoms appear by adhering to the service interval provided by your car manufacturer.

The timing belt may fail before the expected interval. If that occurs, it is important to recognize the symptoms and fix the problem as soon as possible.

Symptoms that may appear when a timing belt turns bad include the engine misfiring, a ticking noise from the engine compartment, and excessive smoke from the exhaust.

Instead of timing belts, some cars have timing chains, which work by the same principle but usually last longer.

A broken timing belt can have extremely serious consequences that may result in a repair bill of several thousand dollars. It is very important to change the timing belt on schedule.

The timing belt itself is not very expensive but replacing one is complicated, making the labor cost very high. Other components should also be replaced, which brings a total of $500 to $1000. 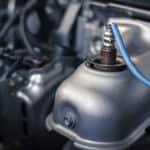