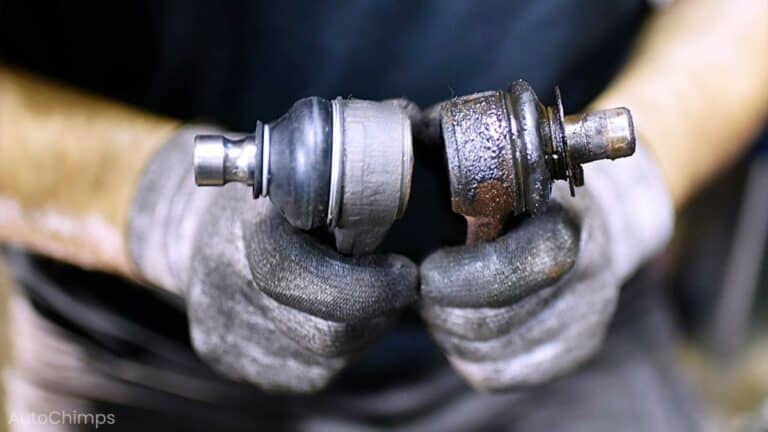 A ball joint allows a connection between two flexible parts, meaning that it can provide a linkage even though the connected parts move in different directions.

When it comes to cars, the ball joint plays a great role in the suspension system as it allows movement up and down to combat bumps, but also right and left to enable the wheels to turn.

Depending on the suspension setup, some cars have two ball joints, one upper and one lower, while other setups only use one (which is more common).

Just like any other part, the ball joint can go bad and need replacement.

Here, we will go through everything you need to know about replacing the ball joint, the cost of it, and how you can detect if there is a problem with your ball joint.

Symptoms Of A Bad Ball Joint

A bad ball joint can have several symptoms that may be encountered when driving the car, but also when it is parked.

A bad ball joint will, in most cases, produce a sound when turning the steering wheel or when driving through bumps, as these movements are specifically what ball joints are made for.

If you suspect a bad ball joint, you may lift your car with the help of jack stands and make sure the car is secured.

Next, take the affected wheel with your hands in the 12 and 6 o’clock positions and wiggle it. A bad ball joint can be felt as the ball moves in the socket.

This usually happens when the ball joint is contaminated with dirt and debris due to the protective cover has been compromised.

A bad ball joint does not necessarily mean that the ball joint has become loose. It may also have been stuck due to debris.

This, in turn, will lead to different symptoms, such as steering problems. For example, when turning the steering wheel, it won’t return to the center but stay at the side.

Correcting the problem and steering to the other side will produce the same symptoms, suggesting a faulty ball bearing.

It should be noted that there are several potential causes for sounds that occur when turning. With some proper guidelines and following a few steps, you will be able to differentiate between these sounds and find the problem.

A broken ball joint should be replaced with a new one. Luckily, the cost of a single ball joint is not as expensive as other car parts.

A single ball joint can cost from $40 to $140, depending on the car in question and if the parts are OEM or aftermarket.

When it comes to quality, the OEM part is usually the best way to go, however, they may be much more expensive. On the other hand, a cheap aftermarket ball joint can be of poor quality.

Therefore, when buying a ball joint, make sure that you buy from a respectable company and/or that the part itself has been proven to be good. Checking car forums and reviews is a great way to do so.

It is also worth noting that some cars have ball joints that are tougher to replace, and others have the ball joints integrated, meaning that a replacement of the whole control arm must be replaced.

If that is the case, the total cost will be greater, but the job in itself is easier as you must have a press for the ball joint installation otherwise.

One should also consider the labor costs, which may differ depending on the shop and the location.

When it comes to ball joint replacement, it takes, on average, about one hour to replace it, but depending on the car, it can take a longer time.

Should You Replace Both Ball Joints?

Ball joints usually last for a very long time and rarely need to be replaced. When they go bad, it is usually due to the dust covers giving up, letting dirt and dust in, and harming the joint.

In most cases, only one ball joint has gone bad due to the abovementioned reason, however, while you are at it, it would not hurt to check the other ball joint as well.

It can happen that the car has been driven somewhere with sharp or bulky surfaces damaging the dust cover, and chances are that the other ball joint cover is bad as well.

Also, if you have two ball joints per side, inspect both ball joints. In most cases, the lower ball joint is bad, if any.

Do Not Drive With Bad Ball Joints

Bad ball joints do not only make noise when they are faulty, but they can also be hazardous when driving in traffic.

As mentioned at the beginning of the article, the ball joint plays a central role in the car suspension system.

A faulty ball joint can and will cause damage to other components of the suspension and the car the further you drive.

It is, therefore, important to make sure to change faulty ball joint(s) as soon as possible.

Replacing a ball joint yourself can be done with relative ease, provided you have all the specialized tools needed for a replacement, namely a ball joint press.

If you have experience working with cars, such as changing brake calipers, filters, and the like, changing the ball joint will not be complicated.

Also, keep in mind that if you decide to change the ball joint yourself, make sure to perform a wheel alignment after the ball joints have been installed.

A proper wheel alignment will protect your tires, brakes, and other components of your cars. Conversely, if they are not properly aligned, it will lead to premature failure.

The car suspension is exposed to lots of force, as well as debris, salt, rocks, and much more. Because of this, all the parts must be sturdy to withhold all these factors.

The ball joint enables the car to absorb bumps due to uneven surfaces, moving up and down while at the same time enabling the tires to turn at all times.

It does so with its ball-and-socket-like design, enabling movement in different directions to the respective parts it is connected to, the control arms and the steering knuckles.

In most cases, a bad ball joint will cause a clunking sound when turning or driving on uneven surfaces. This occurs when the joint is “loose.”

On the other hand, the ball joint may get stuck, which would not emit the abovementioned noise.

Instead, the greatest symptom would be difficult steering, where the steering wheel would not return to the center but stick to the side of turning.

Steering to the other side will have resistance, and if successful, the same problem will occur where the steering would feel stuck in the direction where the car is turning.

Buying a new ball joint would set you back around $40 to $140, while OEM parts will, in most cases, adhere to the more expensive side.

Sometimes, the whole control arm must be replaced, adding up to the cost.

It takes about one hour to change one ball joint, but this may differ depending on the condition of the car and the car model itself.

Lastly, keep in mind that some cars have one ball joint per side, while others have an upper and a lower ball joint. Make sure to inspect all the ball joints before you decide to replace them. 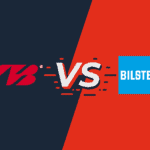 KYB vs. Bilstein – Which Company Makes The Best Shocks?