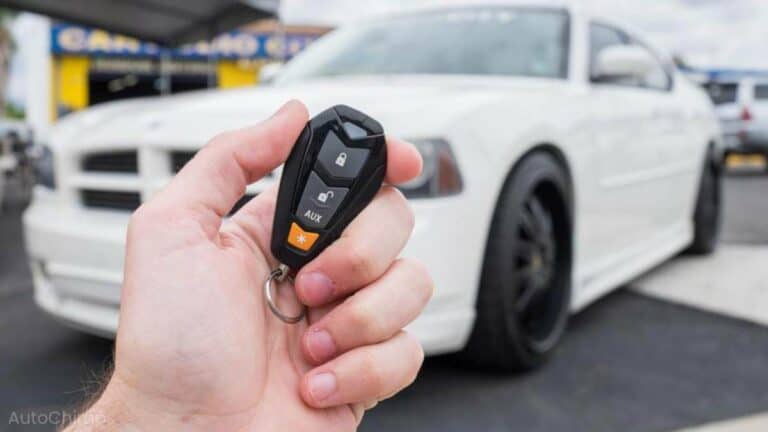 The car alarm is mainly to deter thieves from stealing your car. However, more often than not, the car alarm will go off when no danger is nearby.

It is more of an embarrassment than a comfort to the car owner when the car alarm goes off randomly at night. If your car alarm randomly keeps going off, you are in the right place!

In this guide, you will find every step to take for all car alarm problems so that you may easily recognize and fix the problem as soon as possible.

Let’s get started with the guide.

The key fob is a key component (pun intended) of the car alarm. It signals the car to unlock and also deactivate the car alarm system.

If the key fob is low on battery or has a bug, it may set the alarm when you try to open or start the car.

Depending on the design of the key fob and the car model in question, it may be possible that the panic button is pressed when trying to unlock or lock the car.

Make sure there is no dirt on the key fob, as it may cause the panic button to be pressed. Also, a key fob that has been in contact with water or any other liquid may be causing the key fob to fail.

The best way to test if the key fob is the culprit is simply to try with another one, if available. If the other key fob is functional, then the first one is faulty. If not, the fault is probably somewhere else.

A faulty key fob can usually be fixed by changing the battery. Sometimes reprogramming is needed, which is usually possible at an authorized shop or dealership. Otherwise, a new key fob must be bought.

As time goes by, cars rely more and more on sensors and computers, and car alarms are not an exception.

Any of the sensors may be a potential cause for your car alarm randomly going off. Most would need a replacement, but there are a few steps you should take before deciding to replace a sensor, depending on the type of sensor.

Before eventually changing these sensors, it is recommended to check that each respective compartment is properly closed. It may be possible that dirt or debris is hindering it from closing properly.

This would mean the sensors are working properly, but the compartment in question may be loose due to dirt or debris. In that case, cleaning it would solve the issue.

However, in most cars, this would also inform the driver on the dashboard that these compartments are opened, even while driving.

The problem may also lie with debris or dirt on the sensor itself, which is one of the reasons why you should keep your car clean as long as possible, one of the essentials of proper car maintenance.

Car alarms do not only go off when the trunk or a door opens wrongfully. Air pressure and shock sensors may react to loud sounds, vibrations, or glass shattering, triggering the alarm.

These sensors are usually causing the alarm to go off when a loud sound is heard, or the car is vibrating for whatever reason.

Just like the other sensors mentioned, these can go bad too. However, the problem may more specifically lie in the sensitivity of these sensors.

A sensitive sensor that is too sensitive will cause the alarm to go off for unnecessary things. For example, if your car is parked in a garage with a neighbor with a loud exhaust.

Another scenario may be that your car is parked close to a construction site or road with lots of traffic.

If you suspect that the alarm sensors are too sensitive, the best thing to do would be to visit an authorized auto shop.

Many people opt for an aftermarket car alarm system in addition to the factory one. This may provide additional safety but also problems.

When installing an aftermarket car alarm, it is important that someone well-experienced does that, as an improperly installed car alarm may go off at any time.

To avoid any unnecessary problems, the best thing is to buy a reputable car alarm that is installed by professionals, as many things may go wrong when installing a car alarm.

A bad car battery can cause many troubles, including making your car alarm randomly go off at night.

The car battery powers the car alarm, which may alert you that the battery is getting low as the alarm goes off.

Luckily, a car alarm going off is not the only indication that the car battery is getting bad. Other signs such as a battery warning on the dashboard, problems with starting the car, dim lights, and more.

If there is a small amount of corrosion, it can be cleaned with appropriate agents. If you do, make sure to be sure of what you are doing and prioritize safety.

How To Turn Off A Car Alarm

The only worst thing about a car alarm going off randomly is not being able to turn it off properly. The best thing is to always be prepared, which is best done by reading the owner’s manual.

If the manual is of little use, here are a few things you could try.

Lock And Unlock The Car

Usually, pressing a button on the key fob will be sufficient, but if that is not helping, you may simply try to lock and unlock the car manually with the key.

In most cars, there is a small mechanical key inside the key fob that is usually hidden.

Use that key or your regular key if it is already exposed, and try to lock and unlock the car through the driver’s door a few times.

If the alarm still doesn’t shut down, try starting the car. Sometimes it is even necessary to drive it a few feet.

A more drastic approach is to totally deactivate the alarm by removing the alarm fuse. In this case, the owner’s manual comes in handy as the location of the fuse box is stated there.

Sometimes the fuse box may be hard to access, therefore, use caution when trying to open it, as you may risk damaging parts around the fuse box.

When the fuse has been correctly identified, simply remove it, and the car alarm should stop immediately.

In some cases, aftermarket car alarms will still go off as the fuse is then only used for the factory alarm.

If that is the case, you may try to locate a small box that usually comes with aftermarket alarms and simply disconnect it.

Disconnecting the battery should only be done as a last resort. As always, when dealing with electricity and the car battery, make sure to be cautious and work with protective gear.

There is a great guide on wikiHow about how to disconnect a battery safely. It may be that the car alarm works perfectly after being reconnected, but that is a rarity.

In a car that has a factory-installed alarm, the culprit is usually a faulty key fob. Check that no dirt or water damage is present and change the batteries. If you have another key, try it with that one.

If the other key fob is also presenting with the same problems, the problem is somewhere else, presumably a faulty sensor or a bad car battery.

Make sure that there is no dirt or debris around the sensors or at different gaps in doors, latches, and so on. If that does not help, the sensitivity of some sensors must be properly adjusted.

If you have an aftermarket car alarm, chances are that it has been improperly installed and must therefore be reprogrammed and/or rewired.

A bad car battery or battery terminals may also be the culprit. If there is a lot of corrosion around the terminals, a simple clean-up will do. Keep in mind that other, more general symptoms are usually present as well.

If the alarm is going off, there are a few ways to shut it down. The first step should be to lock/unlock the car with the key fob. If that does not work, try to mechanically lock and unlock the car several times.

In more severe cases, taking the car alarm fuse off or even disconnecting the battery may be a viable option. Do remember to work in a safe environment with appropriate gear. 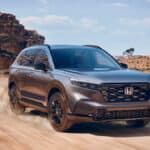 Honda CR-V Won’t Start? Here’s Why And How To Fix