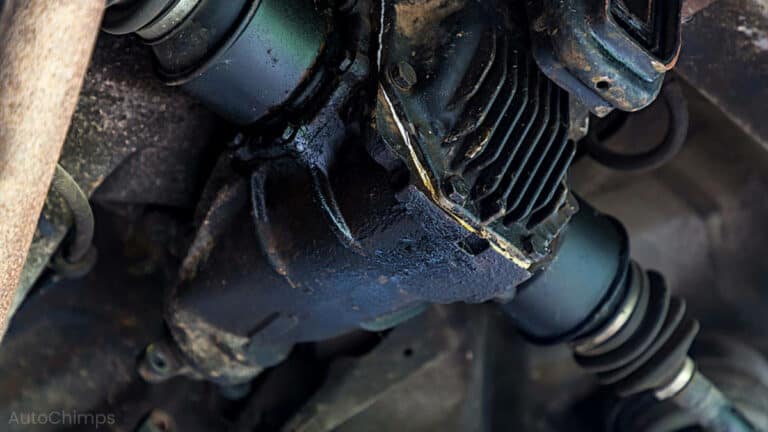 By definition, an axle is any type of shaft that rotates a wheel or a gear. About a century ago, a car axle was simply an iron beam that held the wheels in place and supported the weight of the car.

Although they serve the same purpose today, many advancements have been made over the years, which have led to different types of axles.

CV axles, half shafts, and axle shafts are often used synonymously. However, there can be differences, such as not all car axles are CV axles.

How much does it cost to repair a car axle? The price will differ depending on the car’s setup and its make and model. You should expect to pay anything from $150 to $450.

Due to the broad definition of a car axle, it can be easy to confuse many different parts. In this guide, we will look at CV axles, or so-called half shafts, and rear axle replacement.

Other axles include torsion beam suspension and beam axles (which also include live axles and dead axles).

Thankfully, a car axle will rarely break. If it does, it has usually been damaged by strong physical forces acting on it. This could be due to a small (or big) crash or driving over a deep pothole.

Keep reading to learn how to recognize a problem with your car’s axles and how much it costs to fix a broken one.

Signs And Symptoms Of A Bad Car Axle

There are several signs and symptoms that could suggest damage to a car’s axle. You should always check the axles if your car has been subjected to strong physical forces, such as a crash (regardless of the severity).

The most common signs and symptoms include vibrations, noises, and grease leaking out to the wheels. In the following sections, we will take a closer look at all these possible symptoms.

If you suspect that your axles are bad, you should avoid driving as much as possible. If you do need to drive, do it carefully and safely.

The most serious sign of a bad car axle is vibrations when the car is in motion. The vibrations can be so bad that passengers feel them, but they could also be isolated to the steering wheel alone.

As the car axle supports the vehicle’s weight and keeps the wheels in place, the car’s handling will be affected significantly by the condition of the axle.

If you notice these vibrations, the car axle might need to be replaced entirely. However, there are many other possible reasons your car is shaking when driving.

If you hear a clicking noise when turning, there is likely a problem with the CV joint. If it turns out that only the CV joint is bad, it can be replaced without replacing the entire axle.

Unfortunately, a bad CV joint could also suggest that the whole axle is bad and needs to be fully replaced.

A clicking noise usually presents itself when the joint is bad, while a rhythmic knocking is more likely to suggest damage to the axle.

The CV joints are constantly rotating and consist of moving parts that require lubrication. To ensure that these joints work properly, grease is used to lubricate all the parts.

If it turns out that there is a leak, all the grease will be leaking, and the joint will likely sustain further damage.

The grease may leak onto the wheels or under the car and will also exhibit other symptoms, as described above.

The most common axles are constant velocity axles, known as CV axles for short. At the end of a CV axle, toward the wheel, you will find the CV joint.

A CV joint, like a CV axle, is mostly used in front-wheel-drive cars. The constant velocity joint allows the driveshaft to transmit the power at different angles while maintaining a constant speed.

CV axles are also called half-shafts, as they do half of the work in the axle. There is one CV axle for each front wheel.

If it turns out that only one side of the CV axle is bad, it is only necessary to replace the affected side.

As mentioned previously, it is rare for a car’s axle to break, but it does happen. It is more common for the CV joint to break.

In many cases, only the CV boot of the joint needs to be replaced, which is a task that is far less significant than replacing the whole axle, costing about $100 with parts and labor.

Most cars that are front-wheel drive use CV axles at the front. However, rear-wheel-drive cars use a differential in the back connected to a rear axle shaft, which connects to the rear wheels.

Because the power is sent to the back, the front axle does not have a CV joint but a stub axle. This works together with the kingpin in supporting the rotational movement of the front wheels.

This means that depending on the drivetrain, the cost can vary based on the affected axle.

A dead axle means that it only bears the weight of the car, while a live axle also transfers the power produced by the engine.

If it turns out that a car axle is bad, it should be replaced, not repaired. The cost depends primarily on the car model and the type of axle affected.

If you need to replace a CV axle, you can get one from $50 to $150, depending on the model. It is recommended to buy an OEM axle, as a universal CV axle might not be a perfect fit for your car.

Keep in mind that both of the CV axles could be bad, which means that both will need to be replaced, doubling the cost.

As previously noted, many different axles exist, and there is some personal interpretation needed in regard to what is meant by a car axle.

In any case, you should be aware that a transaxle is a differential integrated with the transmission.

A broken axle shaft can damage the transaxle, increasing the repair bill to several thousand dollars. You should therefore change a bad axle shaft as soon as possible. This is also due to personal safety concerns.

If you are relatively lucky and only the CV joint, or more specifically, the CV boot, is the culprit, a replacement should set you back around $100 to $200.

If you feel comfortable changing the CV boot yourself, you can replace it for a much lower cost, closer to $30.

The cost to replace a rear axle shaft is similar to the cost of changing a CV axle, which is between $150 and $400.

Keep in mind that the cost depends on the drivetrain, the car model, and the extent of the damage. The price can therefore fluctuate significantly.

Rear-wheel-drive cars feature a driveshaft that goes from the engine in the front to a differential in the back, which sends the power to the rear wheels.

Because of this, they do not use CV axles in the front but a stub axle for each front wheel.

If the differential does not work properly, there is a chance that you will be able to repair a part of it. A total replacement of the rear differential is a more expensive prospect.

A live axle means the axle receives power from the engine and transfers it to the wheels. A dead axle does not receive any power and only bears the weight of the car.

In most cases, a bad axle is caused by a car accident, so it is wise to give it an extra check to see if any internal parts, including the axle, have been cracked, especially if a wheel is affected.

The car axle can also deteriorate over time and will exhibit signs and symptoms pointing to the problem.

A very bad car axle will give off vibrations that can be felt throughout the car. Less intense faults will present as knocking or clicking noises.

Grease may also leak to the wheels or beneath the car, suggesting a problem.

Remember that you should not drive a car with bad axles. If you have to (to get it to a mechanic, for example), be very careful and drive at low speeds.

If a car axle is bad, it should be replaced and not repaired. If only part of the axle is damaged, such as the CV boot, it can be replaced without replacing the rest of the axle.

The price depends on the car model, the make of the parts, as well as the labor cost at your chosen repair shop. 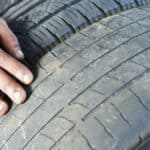 Inside Tire Wear? Here’s Why And How To Fix