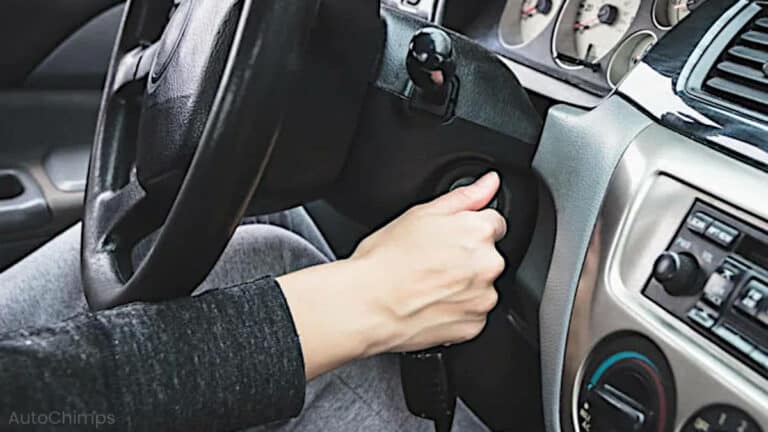 Leaving your home to drive to work, only to discover that your car won’t start, is never a good feeling. Sometimes your car will crank without starting, while it may only click at other times.

In most cases, when the car clicks but won’t start, the problem is caused by an electrical component. The good news is that if you really need to get going, you should be able to jump-start the car.

If you do manage to jump-start the car, which isn’t always the case, the best thing to do is to get it to a mechanic as soon as possible.

This guide will look at the most common reasons why your car clicks but won’t start and how you can overcome this problem.

What Makes The Clicking Noise?

When you use the ignition and start your car, the starter motor engages, and the pinion gear of the starter engine rotates the crankshaft through the starting ring gear.

If the starter motor lacks sufficient power to spin the gear, you will hear a clicking sound caused by the pinion gear repeatedly hitting the starting ring gear.

This occurs due to insufficient power being supplied to the starting motor, which is needed for the engine to crank. Instead, the power is only enough to make the starter engine engage the starting gear.

What Causes The Clicking Noise?

As mentioned previously, the clicking noise is due to electrical problems. These have multiple possible causes, such as the battery, alternator, or starter motor itself.

In short, the most common reasons are the following:

Each of these potential causes will be described now.

A dead battery is the most common problem that causes a clicking noise when trying to start a car. To test the battery, you can simply use a voltmeter (or multimeter) to measure the voltage in the battery.

The normal voltage of a car battery should be 12.6 volts or above. If the test shows that it is lower, the battery is a likely culprit.

You can still start the car by jump-starting it and then driving to recharge the battery. However, this is not a long-term solution.

If you try to jump-start the car and do so successfully, but it then shuts off, the problem may be with the alternator.

A broken alternator could also lead to a broken battery. It is, therefore, important to pinpoint the fault, which you can do by testing the alternator.

If you replace the battery and the problem reoccurs quickly, the alternator may be the culprit.

Your car’s failure to start could also be caused by a faulty starter motor.

In most cases, a bad starter will not produce a continuous rapid click. Instead, you will probably hear a single loud click.

It is also possible that you will hear a grinding noise, or you may only hear a whirling sound.

As with all electrical components, a bad wire somewhere in the electrical system could negatively impact the rest of the system. You should be extra careful to ensure that the clamps are connected to the battery.

There is also the possibility that corrosion is affecting the battery terminals, making it impossible for any current to pass through the cables.

If this is the case, disconnect the battery and try to get rid of the corrosion with a battery cleaning agent. Always ensure you follow all precautionary methods when working with a battery or electrical components in general.

If your car is clicking but not starting, there is probably a fault in one of the electric components, such as the battery, alternator, or wiring.

The clicking sound is produced as the pinion gear of the starter motor repeatedly hits the starting ring gear.

In most cases, it is possible to jump-start the car. If the car still refuses to start or starts but shuts off shortly after, the problem likely resides in the starter or alternator.

A starter problem will emit a single loud click. A dead battery or a faulty alternator will produce a continuous click.

Whatever the cause of the problem, if you decide to check it yourself or try to fix it, ensure you adhere to all safety precautions when dealing with electricity. 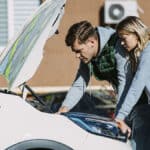