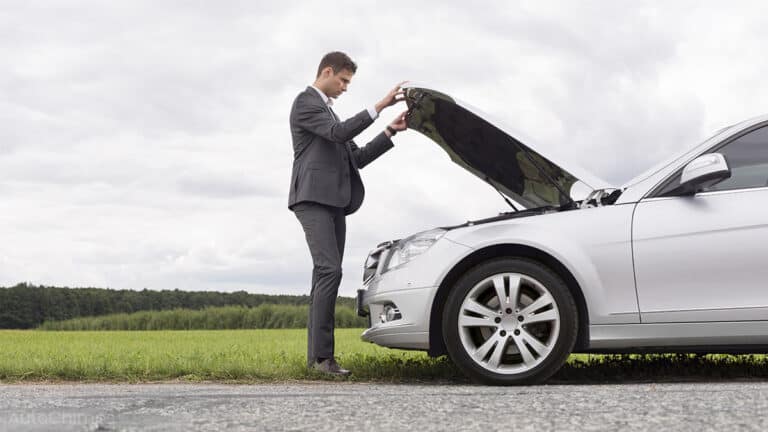 Having your car shut off in the middle of a drive is a frightening and potentially very dangerous experience.

The engine consists of many parts that rely on multiple systems and sensors to work properly.

In most cases, a fault in either of these parts or sensors will not make the car shut off when driving, but it is not unheard of.

The potential causes are numerous and include running out of fuel, fuel pump problems, camshaft problems, and many more.

In this guide, we will look at the most common causes and how it is possible to solve them.

Let’s jump right into it!

Why Does My Car Shut Off All Of A Sudden?

There are many possible reasons why a car can shut off, and it will behave differently depending on the cause.

For example, if the ignition is loose, the car can often be started again if the ignition switch is put back into place. In contrast, a car with no fuel will be impossible to start until you add fuel to the tank.

In the following sections, you will find multiple potential reasons why the car may shut down while driving. Every issue can be solved, but the solutions differ in complexity.

It is important to note that a car with an internal combustion engine will not have power steering or braking, making it more difficult to control.

We will touch on this at the end of the article. Make sure to read it all, as it can help immensely if your car suddenly shuts off.

Lack of fuel is one of the most common reasons why a car shuts down while driving.

Sometimes this will be due to a fuel leak, while in other cases, the driver is to blame for not filling up the gas tank.

It is also possible that the fuel gauge is faulty and provides inaccurate readings.

Whatever the reason, the fact is that a car with no fuel will not run, and it will shut down regardless of where you are.

In most cars, the fuel light will turn on when there is about 10% of the fuel capacity remaining. This is the first warning that you should fill up your fuel tank.

When there is no fuel left, there will be no obvious warnings except that the car will start sputtering a second or two before you notice that stepping on the gas pedal no longer has any effect.

The car will start to decelerate, and you will need to act quickly to get the car to a spot where you can stop safely.

Once you are in a safe spot, all you need to do is fill up the fuel tank again. Make sure you have enough fuel to get to the nearest gas station and fill up the tank.

Another possible culprit is the ignition switch.

When the car’s key is turned, the ignition switch is also turned, which then activates the electrical systems and delivers power to the ignition system.

Without an ignition system, there will be no combustion, and thus, the engine will stall.

It is sometimes possible to simply turn the key, and the car will start again. If this is the case, you should try to stop somewhere safe and address the problem.

The alternator is what makes all the electronic components work in a car. This includes the ignition coil and, consequently the spark plugs.

The good news is that a faulty alternator will generally display symptoms long before it becomes so bad that the engine stalls while driving.

Some symptoms include dimmed lights, flickering lights, a dead battery, and more.

A car with an alternator that is not functioning will not start again, which means you will need assistance to move the car.

Related:Signs Of A Bad Alternator

As mentioned previously, a car with an internal combustion engine cannot run without fuel.

There may still be fuel in the tank, but not enough fuel entering the combustion chamber.

The job of the fuel filter is to catch dirt and other particles that should not reach the combustion chamber and the fuel lines.

Like any other type of filter, it must be changed routinely. If it is not replaced, it can become clogged, and no fuel will be able to pass.

If no fuel can be passed from the fuel tank to the combustion chamber, no power can be produced, thus the engine will shut down.

Similarly, a fuel pump pushes the fuel from the fuel tank. Without a pump, there is nothing to push the fuel into the combustion chamber, which means the engine will shut off.

Like an alternator, in most cases, a bad fuel pump or filter will be apparent before they become so bad that they shut down the engine.

In both cases, the specific part must be replaced to keep going.

Related:Symptoms Of A Bad Or Clogged Fuel Filter

The crankshaft plays a vital role in making the pistons move properly and providing rotational power to the wheels.

Because the crankshaft must be in sync with all the other parts and processes, a crankshaft position sensor sends the information to the ECU to maintain synchronization.

If the process becomes desynchronized, misfires will happen. In severe cases, the engine will stall.

In most cases, you will be unable to reach your usual speed with a faulty crankshaft position sensor unless the sensor breaks abruptly.

This is because the symptoms of a faulty crankshaft position sensor will usually be most apparent when you start the car or when you are just about to move.

What Should You Do If The Car Shuts Off While Driving?

Whatever the reason for the engine shutting down while driving, knowing how to react is vital to protect you and others on the road.

When the engine shuts down, the car will behave differently as there is no power steering, and it will be tougher to brake.

The most important thing is to keep calm. It is easy to say that when you are not in the situation, keeping calm will help your decision-making and execution.

Try to steer the car to the side of the road, as long as it is safe to do so. If the electronics still work, switch on your hazard lights.

The steering should still work but will provide greater resistance, which is also true of the brakes. If you find it hard to brake, you might need to use the emergency brake. However, be very careful if you do so.

Pulling the emergency brake recklessly could result in total loss of control, potentially crashing your car.

You should instead lift the emergency brake slowly and steadily until the car stops. Once you have come to a stop, you should safely leave your car and wait for help to arrive in a safer spot.

Conquer Driving on YouTube has a great video about e-braking that covers both automatic and manual transmissions, as well as traditional and electronic emergency brakes.

There are several possible reasons why an engine might suddenly stop. These include an empty fuel tank, a faulty crankshaft sensor, or a faulty alternator.

Whatever the cause, if it happens, it is important not to panic and to move to the side of the road and the nearest safe spot.

A car without a working engine will lack power steering, making it much harder to turn the wheel. This also applies to the brakes of the car.

Fortunately, an engine shutting down while driving is a rare occurrence, but it does happen.

In most cases, there will be various signs and symptoms that suggest there is a problem with a particular car component.

Unless you have run out of fuel, you will need to replace the faulty part that made your engine shut down.

As with almost any car-related problem, many of these issues can be avoided with proper car maintenance by following the manufacturer’s recommendations. 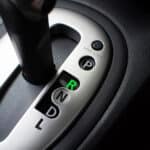 Car Jerks When Put In Reverse? Here’s Why