It is never fun when your car stalls and the causes can be one of many, from releasing the clutch inappropriately in a manual car to a bad fuel pump.

One of the most serious scenarios of stalling is when it does so while driving. This can be a very dangerous situation, putting you and others in danger.

This guide will cover why a car may stall while driving, the causes, and the symptoms you should recognize to prevent it from happening again.

The alternator of a car powers almost all electrical systems in the car while also charging the car battery.

A faulty alternator will not be able to provide enough power to the electrical components of the engine, which may lead to the car stalling while driving.

This will also drain your battery as nothing is charging it, and luckily there are many signs and symptoms that occur when the alternator starts getting bad.

Some signs of a bad alternator include flickering lights, whining noises, and a warning light illuminating the dashboard.

If it turns out that the stalling is due to an alternator failure, the car will probably not be able to start again. It may happen that it only cranks but does not start or shuts off right after starting it.

Spark plugs are very important for a gasoline-driven internal combustion engine. Sometimes, it may happen that they do not work properly, which can cause your car to stall.

If it has been a long time since the spark plugs were changed, it would be advisable to inspect them.

Having the car stall while driving due to bad spark plugs can happen, but usually, there are a few signs that spark plugs are going bad, which include rough and vibrating acceleration, rough idle, and more.

Bad spark plugs do not stop working at once, but they may work with intermittent efficiency.

If it turns out that your spark plugs are fine, but the symptoms go in hand with bad spark plugs, the problem may lie with the ignition coils, which produce many similar symptoms.

The crankshaft and camshaft work in a synchronistical way, enabling the engine to produce power in a refined manner.

Both sensors provide the ECU with information on the position of each respective part.

With a faulty sensor, the readings will be incorrect, which can cause inefficient combustion and, in some cases, stalling, even while driving.

A bad camshaft position sensor may give many symptoms, including rough idle, reduced engine power, and stalling of the engine.

Similar to the camshaft, a crankshaft position sensor may produce other symptoms, such as difficulty starting the engine.

Both the camshaft and crankshaft position sensors can make the car stall unexpectedly, even in the middle of a drive.

The fuel system has many parts that can cause problems, even if all the other parts are working correctly.

When it comes to stalling, the problem may lie with the fuel pump, the fuel pump relay, or a bad fuel filter.

Also, perhaps it goes without saying that an empty gas tank will cause your car to stall.

Getting the fuel to the engine is the main task of the fuel pump.

If the fuel pump does not work properly, insufficient fuel will reach the combustion chamber, which may prevent ignition.

If the fuel cannot be consistently reached, the engine may stall. In most cases, though, the car will first take precautions, such as entering limp mode.

Other symptoms include loss of power, engine puttering, and reduced gas mileage.

A clogged fuel filter will make the fuel pump work harder and may block the amount of gasoline reaching the combustion chamber to the extent that it stalls.

Sometimes your car is perfectly fine, but the fuel you are filling up your car with can cause troubles, including making your car stall while driving.

Good quality fuel will make your car run smoother but also protect it and consequently improve the longevity of the fuel system.

There is a possibility that the fuel you just filled up your car with is contaminated. If the contamination is severe, the car will not be able to run properly and might even stall.

The contamination may be due to the gas station, but this is very rare. Instead, the most common cause of contaminated fuel is an open gas cap, which may give way to water or debris in the tank.

The fuel pump relay supplies the fuel pump with an electrical current to enable it to pump fuel to the engine.

Perhaps you have noticed a buzzing or whining sound when turning on the ignition; that is, the fuel pump going off with the help of the fuel pump relay.

If the fuel pump relay suddenly stops working, no electricity will be provided to the fuel pump, and thus, no fuel will be sent to the engine, leading to a stall.

A faulty fuel pump relay will present itself when trying to start the car or right after it. If it stalls in the middle of a highway drive, the culprit is probably something else.

Most cars usually either have one of these sensors whose task is to measure the air density for the ECU to determine how much fuel should be used for an optimal fuel/air mixture.

A faulty MAP or MAF sensor may give the wrong values or no values at all, leading to an ineffective fuel/air mixture causing ineffective combustion, and may stall in some cases.

In automotive terms, a vacuum leak usually refers to a leak in the intake manifold. This brings more air than the engine is “prepared” for, as the leak is after the throttle body.

This will make the engine pull in more air than necessary, leading to a too-lean mixture in the combustion chamber.

Usually, a vacuum leak will give symptoms such as a rough idle, delayed acceleration, and misfires. If the leak is significant, it may cause your car to stall.

While it is not very common, it is possible that the car stalls while driving.

The causes for this are many and can, in most cases, be prevented by paying attention to unusual noises that usually present themselves before it gets so far that the car stalls suddenly.

The engine stalls due to insufficient combustion, which can be caused by many things.

For example, it can be electrical, problems with a variety of sensors, problems with fuel delivery to the combustion chamber, and/or insufficient amount of air to ignite the fuel.

If the car stalls while driving, it is wise to stop at a safe spot if possible and not continue driving or, at the very least, drive with caution to a safe place.

Some problems may come and go with time, while others won’t let your car start again.

As previously mentioned, make sure to maintain your car properly and resolve any problem that makes your engine run rough. 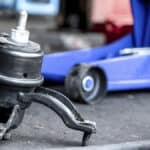 Can You Drive With A Bad Motor Mount?