Your air conditioner and heater are your best friends on a hot summer day or a cold winter night.

Unfortunately, like any other piece of technology, your AC could break at the worst possible time.

Air conditioner problems can have many causes. The most common reason an AC stops working is due to one or more leaks in the system.

In this guide, you will learn everything you need to know about fixing the AC in your car, as well as how you can discover the cause of the problem.

In most cases, the problem is due to one of the following:

How Does An AC Work?

Before we jump into the reasons why an AC might stop working, understanding the process of cooling your cabin will give you a better chance of finding the root cause of the problem.

An air conditioning system works by changing the refrigerant from a gas to a liquid state. This process requires the help of a few components.

At the start of the process, the AC compressor is connected to the engine’s crankshaft by a belt. Several pistons compress the air inside the compressor, resulting in heat and high pressure.

The hot and pressurized gas then moves into the condenser, where the gas cools and changes into a liquid form.

The liquid then passes through the dryer, ensuring no gas is present before the fluid continues to the thermal expansion valve.

When the liquid reaches the expansion valve, it is cooled to become a gas again, which then goes through an evaporator.

The heater fan blows air from outside the car through the cold evaporator, thus introducing cold air into the cabin.

Cost To Fix A Faulty AC

It is important to note that a faulty AC should be fixed in a professional repair shop.

By law, no refrigerant is allowed to be released into the atmosphere.

To comply with that law, a special recovery machine must be used. When filling the AC system, it must be done when there is a vacuum in the system. Air and moisture will cause many problems if they are in the system.

Depending on the problem, the cost can vary. The most common problems and the AC repair cost will be discussed in the next section.

Leaks In The AC Systems

Because of the operating pressure in the hoses and other components, everything must be tightly sealed. It is normal for the refrigerant to leak a minimal amount (less than an ounce every year), but a more significant leak may cause trouble.

Leaks in the AC system happen not only due to the pressure and heat but also due to age, as the material becomes weaker with time.

When the system is leaking, it will blow hot air instead. This may also happen if the AC is low on refrigerant.

When the refrigerant leaks, it can be checked by UV dye that is injected into the system. The outside of the system is then inspected to see if any dye has escaped. This is necessary as when a leak occurs, it does so in gas form.

Cost To Fix An AC Leak

If it turns out that the system is leaking in one place, it is necessary to replace the component that is leaking. Unfortunately, almost any component of the AC might leak.

If the compressor runs with a low amount of refrigerant for an extended period, it will eventually break, and you will require a new compressor.

If the O-rings are leaking, which could be the case if the car is newer, they will need to be replaced. O-rings are a relatively small and cheap component, but the labor cost will be high because the whole system has to be depressurized and evacuated.

A pack of O-rings will cost around $10, while a compressor might go for several hundred dollars. The labor cost will vary depending on the part that has to be fixed.

If you turn on the air conditioner and notice that there is no cool air coming into the cabin, the compressor may be the culprit.

There are also other symptoms, such as unusual noises or fluid leaks, as described above. Whatever the symptom is, you will need to replace the compressor if it does not work properly.

Cost To Fix An AC Compressor

As mentioned earlier, for any type of AC repair, the system has to be handled properly, which means special tools and a relatively high labor cost will be parts of the repair equation.

As with any car repair, the labor cost, as well as parts, will depend on your car model. On average, a new AC compressor costs $100 to $200, while the labor cost fluctuates between $300 to $800, depending on the specific car.

A clogged cabin filter can make itself known with several symptoms, the most obvious of which is insufficient airflow into the cabin.

It is also possible that more dust, pollen, and pollutants will get into the cabin as the filter is ineffective.

In some cases, not only the filter will be clogged but also the condenser, which is located right behind the car’s grille.

Leaves, bugs, and other potential things on the road could block the airflow into the condenser, which will reduce the effectiveness of the AC.

Cost To Fix A Clogged Filter

Fortunately, this is not an expensive fix and can be done in a few minutes with little to no expertise.

A new cabin filter costs around $10 to $20. Changing the filter is quick and very easy to do. There is a high risk that dealerships and shops will overcharge you for replacing the cabin filter.

Therefore, changing the cabin filter is best done yourself. You can also ask a professional to change the filter if your car is in the shop for another issue. Under these circumstances, there is a good chance that they will do it for free.

If the condenser is clogged, simply remove the dirt, leaves, or whatever else may obstruct it. Simple and cheap!

There is a risk that other components of the AC are faulty, which would then need to be addressed accordingly.

All the components could be affected, such as the compressor, evaporator, condenser, hoses, and more.

If this happens, the work must be done with professional tools to ensure the system does not get contaminated.

Because of the labor cost, the cost of the repair may be high, depending on the component that has to be replaced. The total could easily rise to over $1000 for labor and parts.

The air conditioner makes the cabin of your car cool and pleasant. It works by changing the state of the refrigerant from gas to liquid which involves high pressures and temperatures.

As time passes, many components will deteriorate, leading to AC problems. A leak is a fairly common problem when the AC does not work as it should.

It can take a few hours to determine the culprit. A dye may be injected to find a potential leak, while some refrigerants include a dye from the factory.

With a UV dye, a potential leak may be seen when lighting up the engine compartment with a UV light.

The cost to fix the AC varies significantly depending on the problem. It ranges from a free fix to more than a thousand dollars. This means there isn’t a definitive answer to what auto AC repairs might cost.

Replacing the cabin filter is best done as a DIY project, while fixing leaks, changing the compressor, and other cases where the system has to be emptied are best done by a professional. 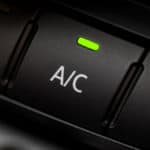 How Does A Car Air Conditioning System Work?