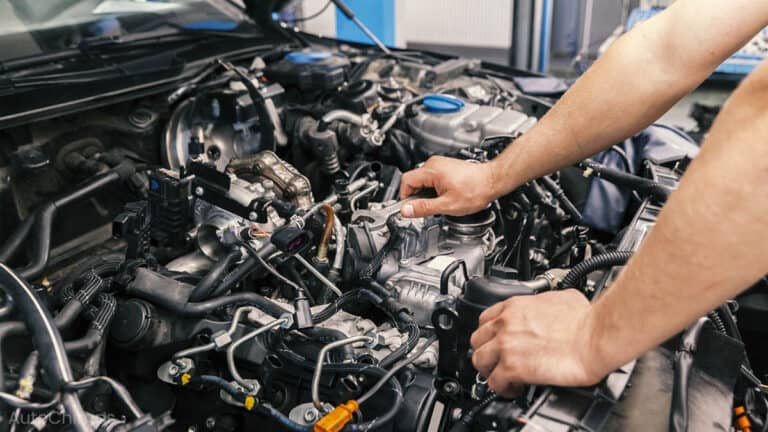 Engine misfires happen when the combustion in at least one of the cylinders is abnormal.

There are many causes of engine misfires, and so are the symptoms; luckily, we will cover the most common symptoms and the causes.

On the same note, an engine that misfires while idle tends to point to a more severe problem.

Like the symptoms, the causes of a misfire can be due to various things, including bad spark plugs, ignition coils, catalytic converter, and a bad camshaft.

After reading this article, you will find out if it is an engine misfire or something else, and if it is, we will touch on how to fix the problem in the best way.

An engine that misfires when idling produces a rough idle as the asynchronous combustion will fluctuate the engine speed.

The rough idle can be noticed on the RPM gauge, as the RPMs will go up and down. It may constantly fluctuate or only occasionally, depending on the cause and extent of the problem.

A rough idle is usually due to a part close to giving up entirely, or a part that plays an essential role has gone bad, such as the camshaft.

When a car is accelerating, the engine is under higher stress, and all the components must work well for the acceleration to be smooth.

If something hinders the combustion from occurring as designed, you will notice the car not going as it once did.

The engine, together with the car as a whole, is constructed in a balanced way to provide comfort for the driver and the passengers, but also due to mechanical reasons.

The importance of the engineering can be seen in a boxer engine, which offers a greater balance due to the horizontal pistons and hence less vibration.

If you ask yourself, “What does a misfire feel like?” the simple answer is vibrations, including jerky acceleration.

An engine that misfires will vibrate because the combustion does not occur in sync with its related piston.

Vibrations may also be felt when a part is loose in the engine bay, such as the engine mount, a bad driveline, or something similar.

These days cars are a technological powerhouse with a vast amount of data read each second by the many sensors in the car.

Luckily, there is also a way for the ECU to notice if a misfire is happening, and if it does, it will illuminate the check engine light.

If you have an OBD2 reader, you may also see which cylinder is misfiring, which can be a clue to the reason for the misfiring.

For example, if you have a DOHC engine, and half of the cylinders are misfiring, there is a good chance the camshaft is the culprit.

The causes of an engine misfire are usually not hard to diagnose, especially if you have an OBD2 reader (or scanner) available.

The causes of misfires are due to components that play a vital role in combustion.

This means that the cause of misfire are most usually due to ignition (spark plugs & ignition coils), air supply (intake, MAF), fuel supply (fuel pump, filter, injectors), and the cam- or crankshaft.

It should be noted that diesel engines do not use spark plugs or ignition coils; instead, they rely on compression to ignite the fuel.

For this reason, if you have a diesel engine misfire, the culprit is usually due to faulty fuel delivery/injection or air delivery.

A bad glow plug could also be the cause, which is exclusive to diesel engines.

Here are the most common causes and how you can narrow down the diagnosis to fix the problem as soon as possible in the best manner.

A bad spark plug is a common, if not the most common, cause of a misfiring engine.

The spark plug ignites the fuel when the piston is positioned correctly. Failure to do so will cause a misfire.

Modern spark plugs tend to be very reliable and do not cause as many problems as before.

However, they still do go bad, and if you can’t remember the last time you replaced them, chances are the spark plugs are to blame.

Ignition coils are another essential component of the gasoline engine’s combustion.

The role of the ignition coils is to convert the low voltage from the car to extremely high ones needed for the spark plug to create a spark and ignite the fuel.

The tricky thing with bad ignition coils is that they will make the spark plugs look bad, even though nothing is wrong with them.

If your spark plugs look good and are within their expected lifespan, the ignition coils are probably the culprit.

Causes for a bad catalytic converter may be a blown head gasket, a leak, or an ignition failure due to bad spark plugs or ignition coils.

Therefore, a clogged catalytic converter is more of a result of an engine misfire instead of a cause. However, it will make the presentation of the initial cause worse.

The camshaft and crankshaft are extremely important for the engine.

In a way, they are analogous; the crankshaft synchronously moves the pistons, while the camshaft moves the top pistons (valves) similarly.

While a bad crankshaft will have a detrimental effect and can cause engine knocking, it may be possible that some type of sensor is off, causing the misfire.

If you suspect that the camshaft or crankshaft is not working properly, you should not start the engine until you confirm the reason for the misfire.

The camshaft may also be the culprit, which can cause different symptoms depending on if it is a DOHC or SOHC engine.

Either way, it would be good to check if the valve timing is appropriate. If it is, the camshaft is most likely not the culprit.

Like the crankshaft, there may be a sensor that has gone bad. The ECU will often show a code indicating that the sensor is faulty, but this is not a given.

The cause of a misfire may be due to too much or little fuel in the combustion chamber.

This may happen either due to a faulty sensor (most commonly the mass airflow sensor) or a vacuum leak.

A vacuum leak means there is a leak somewhere that most commonly surpasses the O2 and MAF sensor, making the engine run lean and causing a misfire.

Vacuum leaks can be hard to find but with the help of a propane torch or some water, just make sure you know what you are doing before finding a vacuum leak.

Without fuel, the engine won’t run, and without adequate fuel supply to the combustion chamber, the cylinder may misfire.

When it comes to the fuel system, multiple components can go bad and consequently cause a misfire.

The heart of the fuel system is the fuel pump which, as expected, will cause symptoms synonyms with misfires.

If the fuel filter has not been changed in a long time, the chances are that it has been clogged, making the fuel pump work harder and consequently leading to a shorter lifespan.

That brings us to the fuel filter. It is relatively cheap to change a fuel filter, and it should be done to protect the fuel pump and make sure that clean gasoline gets to the combustion chamber.

A clogged fuel filter will eventually lead to a bad fuel pump and fuel injectors (which can also cause misfires). Therefore, make sure to change the fuel filter according to the schedule.

When an engine misfires, the combustion in one or more cylinders is abnormal, which will, therefore, potentially cause a variety of symptoms with at least as many potential causes.

The best way to describe what a misfire feels like is an inconsistent idle together with vibration, especially when accelerating (jerky acceleration).

As mentioned, the causes of engine misfires are plenty.

Systematically, one may say that engine misfires are caused by four main categories: the ignition system, airflow, fuel, and the crankshaft or camshafts.

In turn, these can be faulty due to a single part, some type of leak, or simply a related sensor, such as the mass airflow sensor in the case of an airflow problem.

If you, for any reason, suspect that the problem is with the crankshaft or camshaft, you should be extremely cautious, as it can cause detrimental damage to the engine if it keeps running.

In other words, make sure to maintain your car properly and fix any type of problem as soon as possible. 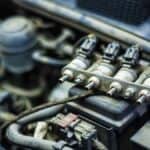