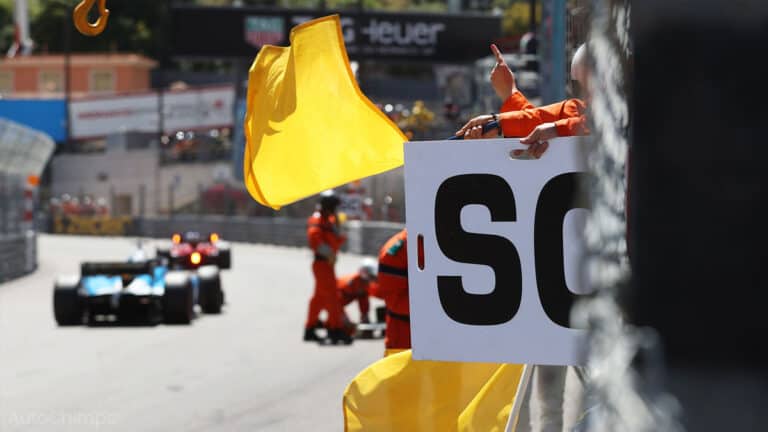 Formula 1 is the pinnacle of motorsport and spends millions of dollars each ear to produce advanced cars, infrastructure, and technology.

However, if there is something that resembles the same type of technology that was used since the start of Formula 1, it is the flags.

The flags used in races are a way for marshals and the race director to communicate with the drivers on the track.

While it is true that this may also be communicated through the driver’s race engineer or team principal, the flags provide a way to convey a message almost instantly.

This article will review each formula flag used in the current 2023 season.

Here are all the Formula 1 flags! 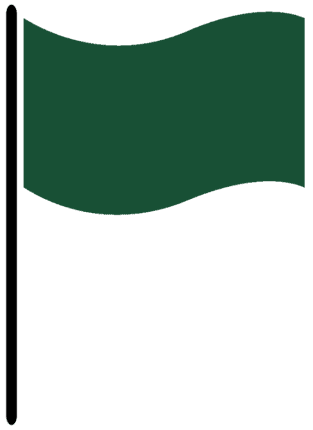 When the green flag is displayed, normal racing conditions apply.

For example, a green flag will be waved when the cars are lined up on the grid, and everything is clear to start the race.

The green flag is also used after a hazard has been cleared, which means that a yellow flag is almost always preceded by a green flag (unless the race is red-flagged). 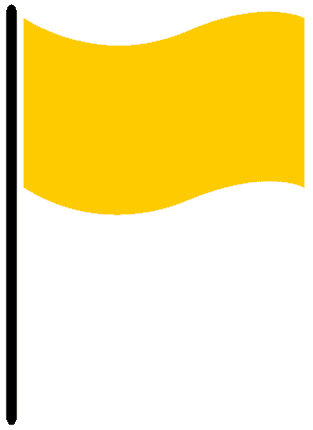 The yellow flag is almost seen in every race and is the most common flag waved after the green one.

It comes in two versions; only one is waved (per marshal), or two are waved at once.

A single yellow indicates danger off the track (or a small part of it), and the cars are prohibited from overtaking and must reduce their speed.

A double yellow flag indicates danger on the track, requiring even greater caution. The drivers should be prepared to stop if the situation requires it.

The yellow flag can be restricted to one sector of the racetrack, meaning that the yellow flag does not apply to drivers in other sectors.

When Are Yellow Flags Used?

For example, the yellow flag will be waved when there is a virtual safety car, which means that all drivers in the race must slow down significantly and practice caution.

If there is a greater danger, the safety car will be deployed while the marshals continuously wave the yellow flag until the threat has been cleared and the safety car has left the track.

The yellow flag can impact the session significantly as it may, for example, increase or decrease the gap to the other drivers or terminate a fast lap attempt in qualification. 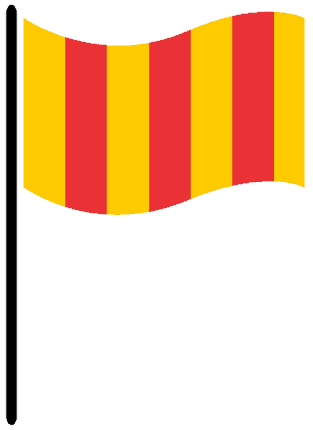 A striped flag with yellow and red colors is not commonly seen, but it can be crucial for the drivers to know.

The yellow and red striped flag indicates that the track is slippery, most commonly due to an oil spill.

If the flag is moved strictly horizontally (not waved), it indicates that there is an animal on the track.

In many cases, if the slippery part poses great danger, the session may be red-flagged, and the circuit may be cleaned of the oil spill (for example) and then resumed. 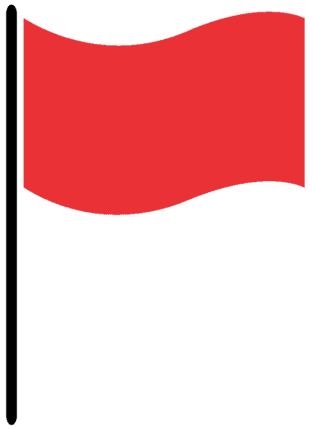 When the red flag is waved, the session is temporarily stopped, and the cars should proceed to the pit lane safely and cautiously until the reason for the red flag has been resolved.

The reasons for a race to be red-flagged can be many, but all reasons have in common that it is too dangerous to continue racing.

Usually, a red flag can be seen due to heavy rain, mist, or a severe crash.

If the race has been red-flagged, the race may only resume if the dangerous condition has been resolved and there is time left to continue the race.

If there is no time for the conditions to be more favorable, the race will not restart, and points may be awarded in part depending on how much of the race has been completed. 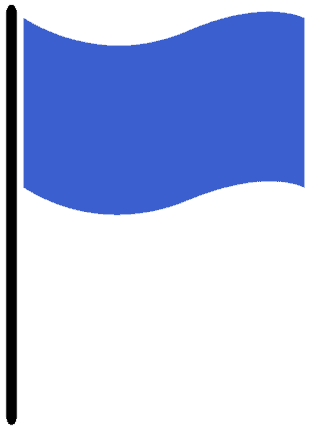 In a racing situation, the blue flag is shown to a car that is being lapped by a faster one, ordering it to let the faster driver pass within three blue flags.

A penalty will typically be issued if the slower car does not comply.

The blue flag may also be used in practice sessions, in which it means that a faster car is nearby and will overtake.

A static blue flag is shown when a car is leaving the pits and traffic is approaching where the track entry from the pit is located.

In other words, the blue flags work to notify the drivers to use their side mirrors and leave space to get overtaken if the car is being lapped or not on a hot lap in practice. 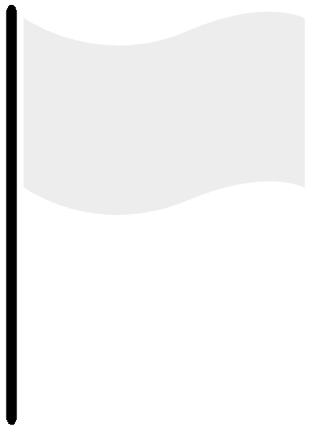 A waving white flag means that there is a slow-moving vehicle ahead.

This is usually due to a non-racing car or truck such as a fire truck, ambulance crane truck, or similar. 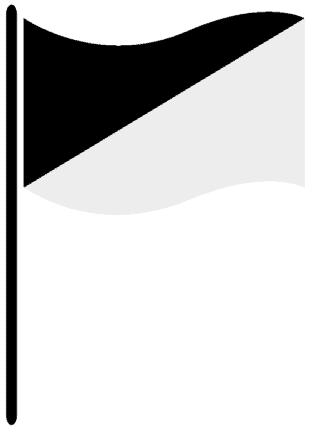 The half-black, half-white flag (not to be confused with the checkered flag) is specific to a racing driver as it works as a warning intended to the driver for unsportsmanlike behavior.

The black and white flag is often waved when a driver does not adhere to track limits, but it may also be due to dangerous driving or something similar.

It can be seen as the last warning before the driver gets a penalty or a black flag. 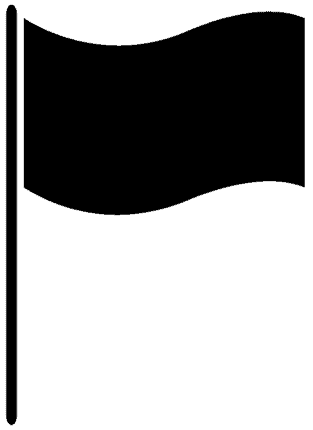 This flag is not common, but people will definitely be talking about it after the race when its shown.

The black flag means that the driver is disqualified from the race.

The causes may be many but they are almost always due to not complying with yellow and/or red flags. Black flags have been handed throughout history due to racers starting in cars not eligible for racing.

The black flag is always accompanied by the number of the disqualified driver. 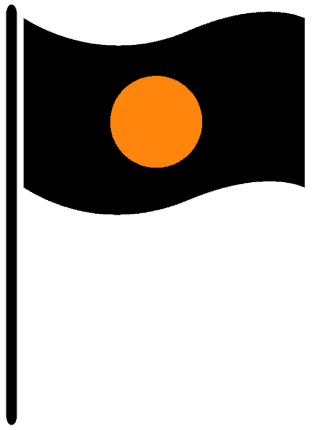 Black Flag With A Orange Circle

The difference lies that the fault does not lie with the driver but with the machine.

Namely, a black flag with an orange circle indicates a mechanical issue with the car and must go to the pits.

The race engineers are on a constant lookout for any mechanical trouble, visually and through the car’s computer. They will, therefore, usually catch a problem before the marshals.

The problem may be as simple as a bad fuel pump, a problem with the hybrid system, or something more serious. 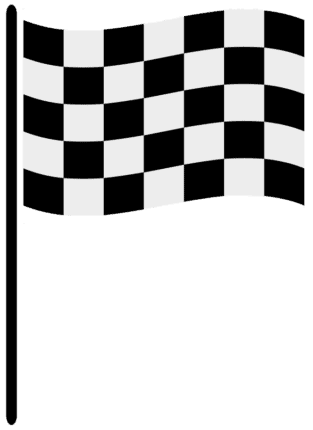 It is not a coincidence we saved this one for last, as the checkered flag symbolizes the end of a session.

This is perhaps the most recognizable flag for racing, as the one who passes the checkered flag first wins the race.

In qualification and practice, if a car is on an ongoing lap after the checkered flag is waived, it may finish the lap, which will count toward any type of progress.

Are Formula 1 Flags Displayed In The Drivers Cockpit?

According to FIA regulations, the drivers must be equipped with red, blue, and yellow cockpit lights, which will automatically illuminate if the same flag is being waived by the marshals.

This means that some flags, such as the black and white flag, will not be shown in the cockpit; in most cases, the driver will notice a marshal waving it, or the engineer will notify the driver first.

Other Types Of F1 Signaling

Formula 1 flags are a tradition that spans from the beginning of racing; however, as the technology has improved significantly since then, there are other types of signaling.

As previously mentioned, each driver has a few lights that illuminate when appropriate with the help of the marshals and the race director, that use a computerized system to activate it.

Multiple lights throughout the racetrack can signal all generalized flags but also show when there is a virtual safety car (VSC) or a safety car (SC).

The F1 flags play a significant role in regulating the race, which can be seen as one of many ways to do so.

There are multiple ways for a driver to gain information about the track’s state, the race, or the car itself in a race.

Marshals do a great job of keeping the drivers, officials, and other people safe on the track with the help of flags and technology.