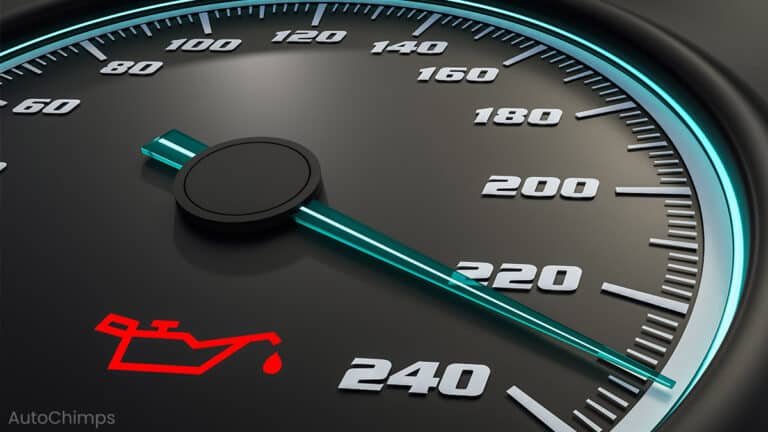 The low oil pressure warning light means there isn’t enough oil circulating in your engine. So, what do you do?

In this simple guide, I will explain the various potential causes and when you should see a mechanic.

Often, an oil and filter change solves the problem. In rarer (but far from uncommon) cases, more in-depth (and expensive!) repairs are required.

Let’s get into it.

What Does Motor Oil Do?

Motor oil is an essential component of an internal combustion engine. Without it, the metal parts would grate against each other and, with time, literally weld in place. This is known as engine seizure.

Motor oil is refined from crude oil. These days, most vehicles are designed to take fully synthetic oil. This is better for your car and the environment.

You fill your oil up by removing the cap underneath the hood. It’s located on top of the engine head with an unmissable symbol of an oil can.

It then drips down through your engine and is stored in a container at the bottom called a sump. When you switch on your motor, a pump drives the oil through various channels and pipes.

As the oil moves past metal surfaces, its primary objective is lubrication. The liquid is “thick” (viscous) enough to form a cushion between two components that might otherwise rub against each other.

It also cleans (by absorbing unwanted chemicals and particulates) and cools (to a limited extent).

Why Is My Low Oil Pressure Warning Light Coming On?

If your low oil pressure light comes on, your car has detected – no surprises here! – that the oil pressure is low.

In other words, there isn’t enough oil flowing through the system at any given time.

Note that “low oil pressure” doesn’t always mean “low oil”. You could have a full sump, but other blockages may prevent some from circulating.

Oil pressure is measured by an oil pressure sensor. These readings are then fed back to the Engine Control Module (ECM), part of the ECU. If it’s determined to be too low, the warning light activates.

The low oil pressure warning light could be accompanied by limp mode. This protects the engine from further damage. Despite being irritating, the alternative is much worse.

Things To Check Straight Away

At this point, it’s worth checking your oil level using the dipstick (or electronic gauge in some newer vehicles). Is it below the MIN mark?

Also, when did you last top up your oil/have an oil change? If it’s been too long (more than a year, or sooner if you cover many miles), you might find it’s in poor condition or running low.

Head straight to a trusted mechanic who can help you find the cause of the problem. As you’re driving, keep an eye on the engine coolant temperature. Pull over and call for breakdown assistance if it rises into the red.

Low Oil Pressure Warning Light Comes On: Causes And How To Fix

Below, you’ll find some of the most likely causes of your oil pressure light illuminating.

Note: If your low oil pressure warning light comes on and off repeatedly, the sensor may be malfunctioning or the pump’s power may be sporadic. Blockages might also lead to this.

If your oil level (measured in the sump on level ground) is low, there isn’t enough pumping through the channels. This, in turn, means low oil pressure in the system.

Common sense suggests this is probably the leading cause of the low oil pressure light.

Oil should be checked and, if necessary, topped up every month or so. All cars burn oil to some extent – even the newest – so it isn’t unusual to see the level drop a little over time.

Check your oil by parking on flat ground. Remove the engine oil dipstick from the engine bay and wipe the tip with a piece of old cloth or paper towel.

Push the dipstick back in all the way before pulling it out once again. You’ll see oil coating the tip. Does the level lie between the MAX and MIN marks?

If so, the oil level is fine. You might like to top it up to the MAX mark as a reference point for the next check, although this isn’t essential.

You need to add more if the oil level is lower than MIN. Pour in a little bit at a time, re-measuring to ensure you don’t overfill it.

Make sure you use the correct type of oil! You’ll find the multi-grade in the owner’s manual.

If your car is overdue for an oil change, don’t ignore it! Go straight to a local shop.

You might find your oil levels dropping faster than you’d expect due to a leak. For example, unless you drive several thousand miles per month, you wouldn’t expect the mark to dip below MIN if it was previously topped up to MAX.

Oil leaks can be much more difficult to pin down. They could be internal (look for blue, oily exhaust smoke) or external (you might see an oil puddle on the ground).

If you suspect a leak, it’s best to get a mechanic involved. It’ll save time and money in the long run.

The oil filter should be changed every time you go for an oil service.

Its job is to filter out damaging particulates carried in the oil. This protects the pump and overall system from damage and gunk.

All filters are technically designed to clog up. They’re removing harmful substances and inevitably need to be replaced.

If the oil filter hasn’t been replaced for some time, it may interfere with the oil flow. This activates the low-pressure warning light.

A typical new oil filter comes in at around $10 or $15. However, you must replace the oil, too. Expect to pay about $80 to $100 for a synthetic oil change, including a new filter.

Mechanics may find that the OBD II codes point them straight to the sensor. Sometimes, you’ll also see an external oil leak at the sensor itself.

If the pressure sensor is the problem, you’ll need a new one. Including labor rates, this doesn’t often come to much more than $100.

Clogged passages could be the reason for your low oil pressure light. That said, blockages may also lead to high oil pressure as more oil is forced into other areas.

Blocked (or partially blocked) passages are usually caused by gunk. This forms when the oil deteriorates or collects too many pollutants.

This thick, mud-like goo forms in the sump. Using your car spreads it through the channels and passages. It will eventually lead to blockages, although sometimes temporary.

Gunk can be removed with an oil change, except in serious situations. When the new oil is added, an engine flush additive might be added to break the gunk down.

The oil pump drives oil through the channels in your engine. It essentially squeezes it, pushing it along.

Like all mechanical components, the oil pump could stop working correctly. The following issues could lead to the low oil pressure warning light coming on:

If this is the root cause, mechanics will work to identify it once they’ve eliminated other components.

On-board diagnostics (OBD II) could lead them directly to it. Otherwise, it might need to be removed and examined.

If the pump is deemed the culprit, you might need a new one. It’s also advisable to replace or clean other critical components, including the oil filter.

Checking and topping up your oil comes under the generic umbrella of basic maintenance. It’s something you’re expected to do (and should).

You might find that the low-pressure light deactivates after you add more oil. In that case, brilliant! You’ve solved the problem. There shouldn’t be anything else to worry about (unless the light returns).

If this isn’t the root cause, it’s at this point that you should go to a trusted mechanic. They’ll use advanced diagnostic skills and tools and perform an oil change to find the problem.

Oil issues aren’t usually too expensive and are often fixed with a simple oil and filter change. However, in severe cases (such as blown piston rings), you might end up paying thousands of dollars for an engine rebuild.

Prevention is better than cure. Check your oil every month and get it serviced regularly. This will help keep low oil pressure problems well away. 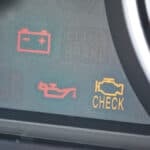 How To Reset A Check Engine Light