The oil in your car makes your engine run smoothly and protects it from the wear and tear that comes with constant use.

If your oil pressure is low, you will need to know the possible causes and fix the issue as soon as possible.

This guide will help you identify if your car has any of the symptoms of low oil pressure and teach you how how to fix the problem.

Does My Car Have Low Oil Pressure?

It is first important to determine what the problem is. The clearest indication that you have low oil pressure is your dashboard, specifically your oil warning light.

As its name suggests, the warning light indicates a problem with the engine oil system. In most cases, low oil pressure is the primary culprit, but it is also possible that you have the opposite problem: high oil pressure.

In addition to the warning light, other signs of low oil pressure include:

Should I Be Worried?

The engine oil is a vital part of a combustion engine. If the system does not work properly, the engine is at increased risk of damage due to the friction of all the components that are normally lubricated by the oil.

Not only does the engine oil serve as a lubricant. It also plays a role in protecting the engine against corrosion, cooling the engine as well as cleaning it. As such, an abnormal oil level is something you should not ignore.

To be safe, we recommend shutting off your engine as soon as possible in order to prevent any damage.

Before we look at the causes and treatments, it is important to recognize how engine oil and the lubrication circuit work.

The engine oil is often described as the blood of the vehicle. This highlights the importance of the oil but also gives a sense of how the entire system works.

The analogy can be taken further. In the lubrication circuit, various “organs” play their part in maintaining the engine properly.

The sump, also called the oil pan, is where all the oil is stored. From there, the oil pump (the “heart”) sends the oil via oil galleries (“arteries”). Along the way, it is filtered through the oil filter (“kidneys”), removing any impurities.

As the oil moves through the moving engine parts, it leaves a thin film, protecting the surface of each component. This film reduces the friction and cools the engine as it disperses the heat generated by the combustion process.

The cause of low oil pressure is usually due to problems in the lubrication system, as described above. The most common causes are the following:

As previously described, when the oil passes through the system, the oil filter removes any debris and contaminants that are present. As the filter picks these contaminants out, it gradually clogs up.

In order for the engine to receive uncontaminated oil, the oil first passes through the filter. If the filter is obstructed, the flow of oil becomes compromised, leading to low oil pressure.

To resolve this issue, the oil filter must be changed. Keep in mind that this problem is preventable with regular maintenance of the car. Be sure to change your oil and filter regularly, as specified in your owner’s manual.

An inadequate amount of oil results in low oil pressure. Due to the low amount of oil, the lubrication circuit has little to work with.

A low oil level itself has various possible causes, including:

It is important to add the correct amount of oil, ensuring there isn’t too much or too little in the engine. This is best monitored with a dipstick or the car’s oil-level sensor.

To accurately measure the amount of oil in the engine, manufacturers used to recommend allowing the engine to cool off, letting most of the oil settle in the oil pan.

Today, many manufacturers have made alterations to their dipsticks to make it possible to get an accurate reading, even when the engine is warm. It is still important to ensure that the car is parked on level ground for an accurate reading.

If the low oil pressure is caused by insufficient oil in the engine, simply add more oil until an appropriate amount is achieved. It is recommended to use the same oil that is already in the engine. This means the same type (i.e., synthetic/half-synthetic), manufacturer, and SAE grade.

An oil leak will eventually empty the oil. As a consequence, the lubrication system will have a low oil level.

When discussing oil leakage, two types are commonly seen. A leakage in the oil pan or oil filter, which is usually evidenced by drops of oil below your car, or leakage of the valve gasket or oil filler cap.

There are numerous places where oil can leak. Wherever you find it, it should be fixed as soon as possible. In the best-case scenario, the oil filler cap or a faulty drain plug is the problem and can be easily dealt with by replacing them.

It’s also possible that the oil pump is leaking internally, which leads to a low oil pressure even if there is an adequate amount of oil.

Your car does not consume consistent amounts of oil all the time. Brand-new cars usually consume more oil. The consumption tends to decrease gradually and later increase again after it has been driven many miles.

The quality of the oil might also be poor, leading to less effective lubrication, which means that your engine might deteriorate faster than expected.

It is important to follow the manufacturer’s recommendations regarding oil. While many oil companies have deals with manufacturers to recommend their products, it is not necessary to use that specific brand. Just make sure to use the type of oil, including the viscosity (SAE).

If it turns on and you are sure that your car does not have any of the problems discussed in this article and the oil level is within the normal range, it’s possible that the oil pressure sensor has gone haywire.

The oil pressure can be manually checked with a pressure gauge, ensuring the correct pressure will be read by the sensor. If it turns out that the oil pressure sensor shows a bad reading, then it is ready for a replacement.

Unfortunately, the main and rod bearings might be affected, which means the engine must either be rebuilt or completely replaced.

Oil is generally a viscous liquid, and engine oil is no exception. However, the oil’s viscosity plays an important role in the engine working properly.

When buying engine oil, you might have noticed that the package is labeled as “5w-30” or “15W-30”. These are SAE grades.

Put simply, these state how viscous, or thick, the oil is. Previously they were only graded with one number, for example, “SAE 30”, which was a relatively thick oil.

The oil was so viscous at that time because oil thins when heated, and manufacturers had to make it thick for the engine to be lubricated with a viscosity that was just enough in operating temperature.

Every car manufacturer has specified which viscosity to use for their respective car and engine. It is important to follow these recommendations, as improper viscosity might affect your oil pressure.

It is also worth noting that the climate will dictate which oil you should use. If you live in a colder climate, you will need a lower number followed by a “w”, which stands for winter.

We recommend checking with a local authorized dealer or mechanic to make sure you are using the correct oil for your engine.

The blood of the engine, the engine oil, plays a key role in making your car run smoothly and reliably.

If something is wrong, you will usually see a warning light, or your oil gauge will drop, notifying you that your oil pressure is low. It is essential to stop as soon as possible and shut down your engine to prevent any damage.

Most of the problems regarding oil pressure and other automotive issues can be prevented by regular maintenance. This includes changing the oil and oil filter in regular intervals determined by either the duration or miles driven.

The saying “working like a well-oiled machine” is an old favorite and also applies to internal combustion engines. Your car will repay you with many safe and comfortable miles with an appropriate oil level.

Ensure you always have the necessary amount of oil. The correct oil for your specific vehicle should be used with proper viscosity and adapted to your climate. 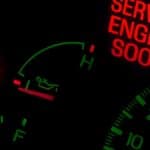 Service Engine Soon Light Explained And How To Fix