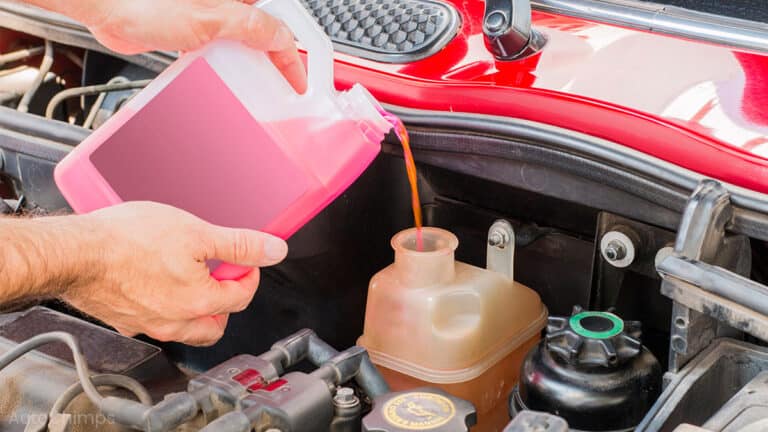 Like any other type of fluid, antifreeze and coolant play a significant role in ensuring everything runs smoothly.

Unlike what many may think, antifreeze is important not only during the coldest months but also when the sun is shining and the air conditioner is going full blast.

Antifreeze helps decrease the freezing point of the water running in the engine coolant in the coldest months, preventing it from freezing (hence the name).

When it is hotter outside, antifreeze also increases the boiling point.

It does not stop there; antifreeze also protects the cooling system component, providing a lot of value to the car engine as a whole.

Not only does antifreeze have multiple uses, but it also comes in different colors. Colors can be detrimental if they are wrongly mixed.

Don’t worry, though; we will make sure to cover all the relevant colors so you don’t get in trouble while you only wish the best for your car.

Without further ado, let’s get going!

Difference Between Antifreeze And Coolant

Before we get into whether you can mix antifreeze, we should first get down to the difference between antifreeze and coolant, which many people may get confused about.

While antifreeze and coolant are related, they are not precisely the same.

Coolant comes in different ratios, which indicate how much antifreeze is present in relation to water. These ratios can be mixed, but it would not be the best choice. More about that down below.

In other words, coolants are ready to be poured into the tank, provided that the correct type of coolant is used. Antifreeze, on the other hand, must be diluted with water before it is poured in.

As previously mentioned, there are several types of colors of antifreeze and coolant, which many times indicate the chemical composition.

However, this is not always the case, so you should never rely solely on the color of the antifreeze. Instead, you should be on the lookout for three main ingredients: IAT, OAT, and HOAT.

The oldest type of coolant out of all the abovementioned ones is Inorganic Additive Technology or IAT.

Back then, there was not a big fuss about the colors of different coolants, as coolants with inorganic additive technology always came with a very recognizable green color.

If your car uses IAT coolant, it may be green or yellow. Again, it is important to stress the fact that colors do not play an important role today.

The other type of coolant is organic acid-inhibitor technology, or OAT for short.

Organic acid-inhibitor technology is used in more modern cars and has the advantage of lasting much longer than conventional inorganic additive technology coolants.

Unlike coolant with IAT, OAT coolant is used today and comes in many different colors.

As the market switched to organic coolant, multiple additives were added to make it more efficient, creating the problem with all these colors and additives we have today.

Most coolants that use organic acid inhibitor technology are orange.

While organic acid inhibitor technology is able to last longer, it may not be as effective as conventional inorganic coolant.

To battle this problem, Hybrid OAT (HOAT) came into being. This combines the best of both worlds, providing adequate corrosion protection that lasts a long time.

Furthermore, several types of Hybrid OAT use different types of inhibitor technology, such as phosphates, silicates, different acids, and more.

As you may expect, these different versions come in many different colors, which may be why you are here.

Depending on the compounds, the colors may range from turquoise to purple, pink, and blue. But again, never rely solely on the color.

Which Antifreeze Should I Use?

As there are so many different types of antifreeze, it is not easy to know which one is correct for your car.

The wisest thing would be to check your car manual or any official information about your car model, which states what antifreeze should be used.

Remember not to go blindly on color. Instead, look at what type should be used, such as silicate (Si-HOAT), IAT, phosphate OAT (P-HOAT), and so on.

As different car manufacturers use different materials on the engine and cooling system, they would be the best source to find out which coolant/antifreeze works best for your car model.

In many cases, the type of antifreeze is tied to the car manufacturer. Furthermore, the car’s manufacturer’s location usually plays a significant role.

For example, European cars rarely use phosphate, meaning that if you drive a BMW, Audi, or Volkswagen, you will probably not use phosphate-based HOAT.

On the other hand, you will have trouble finding an Asian car that favors silicate-based HOAT.

Putting coolant is not a hard task, but it is extremely important that you do not open the engine’s coolant container as it is extremely hot, and the coolant may overflow (explode).

There are occasions when mixing coolants is fine and won’t do any harm at all.

As demonstrated in this article, the color of the coolants may be different, but everything else can be the same, which makes it totally fine to mix.

Mixing different brands should also not be a problem as long as the coolants are the same in composition.

As coolant is antifreeze mixed with water, it comes in different ratios. Provided that everything is the same except for the proportions of antifreeze to water, there should be no harm in mixing them.

We should point out, however, that the best thing is to follow the car manufacturer’s recommendation and use the same brand, as well as ratio, for optimal effect, without any unnecessary hassles.

What Happens When You Mix Antifreeze?

Mixing similar antifreeze won’t have a detrimental effect. However, great problems may arise if two types of incompatible antifreeze mix.

Depending on the composition of the antifreeze, multiple problems may arise.

For example, Japanese cars hate Si-HOAT coolant as the silicone is prone to creating problems for the water pump. The same Si-HOAT is readily used in European cars.

If you mix two different types of antifreeze or coolant, there is a risk that a chemical reaction will take place, which will solidify the liquid.

This poses a problem as no cooling will be in circulation, which may overheat the system. Also, you risk damaging the components of the coolant system.

What Antifreeze To Choose

When it comes to antifreeze or any type of fluid that goes into your car, the best bet is to follow the recommendations of your car’s manufacturer.

They know best which materials have been used for the coolant system and have optimized your car for one type of antifreeze.

You should therefore check to use the type of antifreeze that they recommend. There is generally no problem using an aftermarket one as long as the main ingredients are the same.

Antifreeze not only helps prevent your engine components from becoming ice, but it also helps to prevent overheating in the summer months.

Traditionally, antifreeze has been green, but as technology advanced, multiple types of antifreeze came into existence, and with that came new colors.

The colors usually differentiate the types. However, this should not be taken as a strict rule. Instead, you should carefully inspect the main ingredients of the antifreeze/coolant.

Today, most modern cars use Hybrid OAT (HOAT) antifreeze, but different types of HOATs exist, such as silicone-based, phosphate-based, and so on.

To be safe, you should always use the same type of antifreeze, ideally, the one that is specified by your manufacturer.

If you use a different type of antifreeze or mix, you risk damaging the coolant components and also making the antifreeze ineffective. 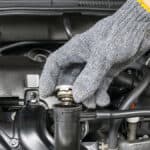 Symptoms Of A Bad Radiator Cap And Replacement Cost