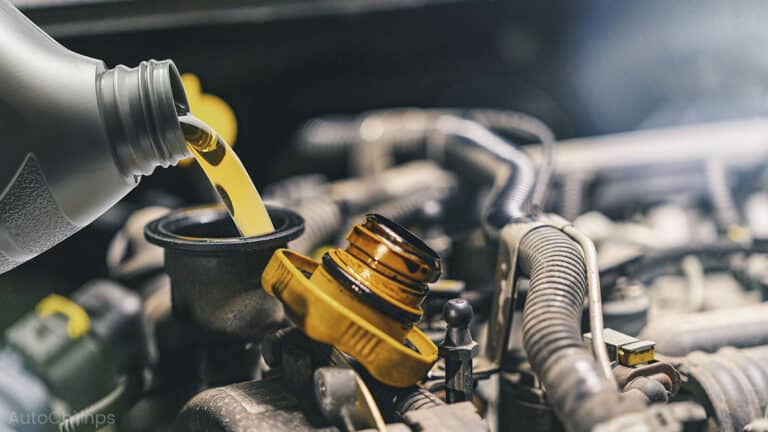 If your car doesn’t have enough engine oil, you need to fill it up for the reasons mentioned above.

Here are the most common signs you need an oil change and what you should do next.

Why Is Engine Oil Important In A Car?

If you’re unfamiliar with how internal combustion engines work, the concept of motor oil might not seem that important. After all, it’s not fuel, steering, or brakes – does it actually matter that much?

That’s the short answer. Its primary function is lubrication. It coats the moving metal parts within the engine, preventing friction and resultant damage.

The oil has a few secondary jobs, such as cleaning and heat transfer (although the bulk of this is done by the coolant system).

If you don’t have enough oil in your car, it’ll immediately struggle as the engine cannot operate at peak efficiency. This can lead to further complications with the oil system and engine. In a worst-case scenario, the motor could seize – a dangerous and very expensive issue.

To avoid these situations, watch out for signs of needing an oil change. Getting your car serviced long before any deeper issues develop is crucial in terms of safety, performance, and finances.

How Does A Car’s Oil System Work?

The basic principles of an oil/lubrication system in an engine are the same across most modern cars. While every vehicle is slightly different, motor oil’s jobs remain consistently the same.

Below the engine (usually) is a bolted-on, sealed oil storage compartment known as a sump. If you’ve ever watched a mechanic do an oil change, it’s this sump that they open underneath the car to allow the oil to drain out.

When you start the car’s engine, the oil pump forces oil from the sump through pipes and precisely carved channels in the engine block. As a relatively thick, “heavy” liquid, it “clings” to the metal surfaces it passes, coating them.

This action prevents friction, helping the car to run more smoothly. At the same time, it removes impurities and, to a limited extent, helps keep everything at operating temperature.

Eventually, after flowing through the engine, the oil’s returned to the sump, where the process continually flows.

What Causes Low Oil Pressure In A Car’s Engine?

When there’s a problem with the oil in your car, it’s usually caused by low oil pressure. That being said, oil pressure could be too high if the engine’s getting too hot or the hoses and channels become severely blocked.

Any of the following (and more) could cause low oil pressure:

If the oil warning light comes on, use the dipstick to check the oil level. If it’s low, top it up with fully synthetic oil from an auto hardware shop. Next, restart the engine. If the light’s off (and stays off), you’ve probably got nothing else to worry about.

However, if the light comes back on (including a few days after you topped the oil up), there’s probably a deeper issue. Recheck the oil level and take your car to your nearest mechanic.

Most cars need servicing (including an oil and filter change) at regular intervals set by the manufacturer. These intervals tend to be about every year or every 10,000 miles.

When an auto shop completes your oil change, they’ll remind you when you should next come in. If you drive a significant distance in the meantime, you’ll need to return earlier.

It’s a good idea to set reminders on your phone or calendar, although the car should notify you when it’s time for an oil change or service. The service light will activate on your dashboard.

This is the best, most straightforward, and most reliable oil change sign anyone could ask for.

Park your car on flat ground and switch the engine off. Take a clean rag and pull the dipstick up and out of the engine, cleaning its end.

Push the dipstick back down to its resting position and then pull it back up, noting the oil level shown. It should be between the “min” and “max” marks. If it’s low, top it up with the correct oil for your car.

New oil is clear and light brown in color. Over time, it quickly goes dark (especially in diesel cars). In general, the darker and thicker the oil is, the older it is, and the more likely you are to need an oil change.

Almost every car, and all modern cars, should be fitted with an oil warning light on the dashboard. It looks like a little oil can with a drip falling out the end.

This warning light illuminates when the car’s ECU registers low oil pressure. If it switches on, you should pull over as soon as it’s safe to do so and call for breakdown assistance.

As mentioned above, low oil pressure could be caused by several things. For a start, you should top your oil up and see if the warning light turns (and remains) off.

Not every car comes with a pre-fitted oil pressure gauge. They tend to be more prevalent on luxury, high-end models (for whatever reason).

If your car does have an oil pressure gauge, you should keep an eye on it the same way as every other dashboard instrument.

When you first start the engine, the needle should swing to the “okay” range almost immediately since the pump switches on straight away, pushing the oil through.

If the oil pressure gauge reads too low (or too high), you have a problem and require an oil change.

When it comes to cars, problems with engine performance and fuel economy could boil down to almost anything mechanical or electrical. However, it’s a common symptom of an overdue oil change.

You might notice low levels of engine power. For example, when putting your foot down, the car might not accelerate as quickly as it should. You might also feel the revs struggling at idle, leading to stalling when you’re parked or waiting in traffic.

The fuel economy will also take a hit. If your car has an active measure of how much gas or diesel you’re using, the reading will drop. If not, you’ll probably notice that you need to head via the gas station more frequently.

Low power and poor fuel economy are signs of needing an oil change because the engine isn’t being appropriately lubricated. Therefore, it generates more heat, and the friction between different metal surfaces slows everything down.

In essence, it has to work much harder to accomplish a lower output.

Keep an eye on your temperature gauge. In reality, this is actually the temperature of the coolant as it removes heat from the engine itself.

Can not getting an oil change cause overheating?

Overheating is one of a few overdue oil change symptoms since, with time, the oil becomes thicker, dirtier, filled with sludge, and is slowly burnt off by the engine.

Related:Why Is My Car Overheating?

Thick, dirty oil doesn’t lubricate the engine’s moving parts so efficiently. Oil is naturally burnt off in engines to some extent (you’ll find the exact details in your owner’s manual). At the same time, sludge forms, blocking up channels and generally hindering performance.

With poorer quality oil and less of it, there’s much more friction, creating heat. If left unattended, this becomes a vicious cycle, with the coolant unable to cope with the constant onset of more and more heat energy.

Although this is one of the most significant signs your car needs an oil change, there’s a bit more going on that will need investigating.

When the engine burns oil, you can usually smell it outside and inside the cabin – the odor of motor oil is unmistakable. You’ll also see blue or gray smoke emitted from the tailpipe (don’t get this confused with the white or clear steam, which is just water vapor).

Since you’re losing oil, it’s important to top it up or replace it as soon as possible.

Related:Why Does My Car Smell Like Burning Rubber After Driving?

However, the more pressing concern should be figuring out why the oil’s being burnt. Somehow, it’s finding its way into the combustion chamber. This often means a deeper problem within the engine block, such as cracked channels, broken piston rings, or a blown head gasket.

Unfortunately, these can be pretty costly to repair. Hence, it’s vital to take your car to a shop as soon as you notice any symptoms of burning oil. Catching it early might save you thousands.

Tapping noises can be caused by the metal parts within the engine knocking each other. The oil isn’t there to lubricate them, so they’re hitting each other.

If you notice unexpected tapping noises coming from your car’s engine, you should always get an oil change as soon as you can.

However, you should also note that older engines do generally develop ticking and tapping sounds with age. This is particularly the case in older diesel cars, but in some gas models, too.

There’s probably nothing to worry about in this situation, especially if this is the only oil change symptom you notice. Still, it’s better to be safe than sorry.

When they overheat, engines could seize (get stuck, lock up and stop working). As metal objects get hotter, they expand. If they get too hot, they’ll start hitting each other.

Oil creates a cushion or barrier between two metal surfaces, keeping them separate and cool. However, when oil levels are too low, friction creates a vicious cycle of more and more heat (as mentioned earlier). In extreme cases, this could cause the engine to seize.

Related:Seized Or Locked Engine? Here’s How You Fix It

Of course, if you have a seized engine, an oil change is the least of your worries, but it may have been the cause.

If you notice your temperature gauge spiking, pull over before it enters the dangerous red zone.

How Do I Look After My Car’s Oil System?

Rigidly sticking to the manufacturer’s recommended intervals for oil and filter changes is the best way you can look after your engine and its oil.

Every time you get an oil change, swap the filter out for a new one. The oil filter strains all the dirt and debris from your oil, protecting your engine and seals. Every oil change should include a filter change as standard, but always check this before purchasing anything.

Failing to change the oil in time will eventually lead to the above symptoms. If they’re allowed to develop into serious problems, the costs can be astronomical, and the car will become unsafe to drive.

Oil and filter maintenance is the simplest way to keep your car running smoothly, safely, and efficiently. Look after it, and it’ll look after you! 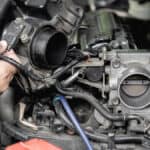 Symptoms Of A Bad Throttle Body And Replacement Cost