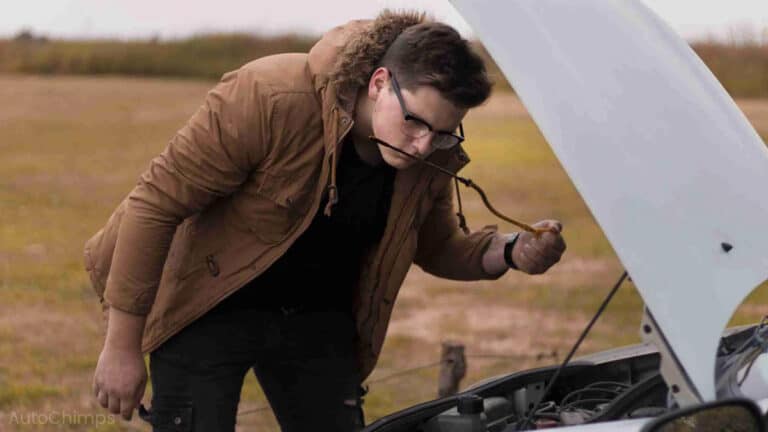 Trace levels of gasoline do end up in your oil, but they vaporize as soon as your engine warms up. There shouldn’t ever be enough to smell it.

If you find yourself in this situation, be cautious. In this detailed guide, I will walk you through the most likely reasons behind it.

Go to a qualified and trusted mechanic if you’re at all unsure. Your car should be safe to drive (gently), provided it isn’t overheating or badly low on power.

What Are Engine Oil And Gasoline?

Although engine oil and gasoline (and diesel) are all refined from the same product (crude oil), they’re very different. In a car, their jobs are hardly related at all.

Engine oil is the motor’s lubricant. It coats all the metal surfaces, preventing friction build-up and resultant damage.

It also plays a role in cleanup and has a minor part in cooling. It also shouldn’t be overfilled.

Gasoline, on the other hand, is what powers the engine. The spark plugs ignite it after mixing it with air (oxygen).

The resultant explosion (combustion) forces a piston downward. Connecting rods and the crankshaft convert this reciprocal motion to torque (rotational force). The power then transfers through the transmission to the wheels.

Most internal combustion engined cars burn a small amount of oil. It’s just one of those things. You’ll find an estimate in your owner’s manual – 15 to 25 oz per 1,000 miles wouldn’t be unusual.

However, this should be minimal. If you notice excessive oil in your exhaust smoke or reducing dipstick readings, go to a mechanic.

Gasoline shouldn’t ever stay in the oil (beyond negligible particulate levels).

What Does It Mean When Oil Smells Like Gas?

Smelling oil in your gas means precisely what it sounds like: gasoline is getting into the oil.

Under standard operation, trace amounts of gasoline make their way past the piston rings and into the sump. They then evaporate as the oil gets up to temperature.

Nothing to worry about here – this is completely normal.

But you shouldn’t be able to smell it. That indicates there’s far too much contamination, and your car will likely need a mechanic.

What Causes Gas To Get In The Oil?

The following are organized in order of severity, starting with the least worrying.

Investigating the problems in this order might save you time and money.

All mechanical failures will eventually lead to gasoline dripping past the piston rings and into the oil.

The combination of these odors could smell like gasoline.

If so, it’s probably time for a routine oil change.

You might also be smelling fuel from another part of your engine bay. For example, when your car first starts, it runs rich to warm up.

It’s worth checking that your ‘problem’ isn’t caused by something like this before going for a technical diagnosis.

Many people use cars for short journeys – five-minute trips to the shops, the school run, etc.

Of course, this doesn’t matter too much – there’s nothing wrong with it, exactly.

If you only use your vehicle for short journeys, the problems will start to add up. Temperatures don’t get hot enough to reach ‘operating temperature’. In short, lots of things simply won’t work correctly.

This includes the engine oil. The vapors will remain in place if it doesn’t get hot enough to turn the gasoline particles into vapor. Over time, this’ll create the odor you smell.

A misfire is when a cylinder’s contents don’t ignite.

They could be caused by almost anything in the fuel, air, or spark (electrical) systems. Pressure within the cylinder also has a significant part to play.

Misfires usually stem from spark plugs or coil packs. An OBD II scanner often helps quickly identify the root problem, which can then be replaced.

When there’s a misfire in the cylinder, the gas won’t burn. This leaves it free to pass the piston rings and drop into the oil.

Fuel mixes with air before the spark plug ignites it. This is known as the air/fuel ratio.

Under standard driving conditions, the ratio will be about 14.7:1. It fluctuates up and down depending on the driving speed, power requirements, environmental temperature, etc.

Anything above 14.7:1 means the car is ‘running lean’. That is, there’s a greater ratio of air to gasoline.

In contrast, a ratio below 14.7:1 is called ‘running rich’. There’s more fuel per unit of air than usual.

Typically, cars run rich to get more power and warm up faster. However, if they run rich for too long, systems start to clog up, fuel efficiency drops, and the engine begins to struggle.

When running rich, some of the fuel in the cylinder won’t burn. This might find its way past the piston rings and into the oil.

If your car is stuck running rich, there could be problems with any of the following:

Ah, piston rings. All of the above problems involve fuel running past these.

They’re the last ones to mention because they’re the most in-depth and expensive to fix.

Piston rings sit around the piston in carved-out grooves. They prevent almost all oil and gas from transferring into/out of the chambers.

(They also help hold internal pressure and heat transfer from the crown to the walls.)

If these break – and they can, especially with time – you’ll end up with all manner of issues. Expect to see the following (as a minimum):

Gas will run straight into the oil (and vice versa). Thus, your oil might smell of fuel.

A complete engine rebuild is the only way to fix broken piston rings. Mechanics remove the motor from the car, strip it down to its basic components, and replace the rings. They’ll clean everything up and then put it all back together.

Expect to pay quite a lot for this job.

Oil Dipstick Smells Of Gas: What Should You Do?

If you smell gas on your oil dipstick, you should first eliminate the simple problems. Try going for a reasonably long drive, ensuring the revs get high and the engine warms up.

In other words, go on the highway – don’t drive through the city. An hour’s journey should do it.

After this, allow the engine to cool and check if the aroma remains.

It’s time to involve a professional mechanic if you still get a strong whiff of fuel.

At this point, they’ll use an OBD II scanner and narrow down the root cause. You’ll have to hope it isn’t anything too expensive. 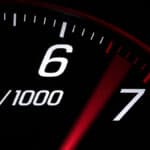 RPM Fluctuating While Accelerating? Here’s Why And How To Fix