Coolant (antifreeze) is a vital part of your car’s engine. Although it might not get the same press attention as other components (such as the oil system or battery), you still need to maintain it.

Coolant is responsible for keeping your engine at an acceptably low temperature. Its job is to absorb and remove heat before dissipating it into the air as you drive along.

If your coolant levels get too low, you’ll run into numerous problems. These could be as severe as a cracked block, blown head gasket, and seized engine.

Avoid this by keeping your coolant at the required levels. It’s a relatively simple “top-up” process, although you’ll need to bear a couple of things in mind. Here’s how to put coolant (antifreeze) in your car.

What Does Coolant Do?

First of all, let’s establish the coolant’s job. It does pretty much what it says on the container: cools the engine.

Coolant is essential because the heat created through the engine’s fuel combustion and frictional properties would soon become uncontrollable without it. As materials get hotter, they expand.

Metal is a prime example of this. If the temperature rise isn’t controlled, the metal will start to weaken and crack. The moving parts will also begin rubbing against each other more tightly, increasing friction. This adds drag and further increases engine heat.

Coolant keeps the engine at a constant temperature, although it must first allow it to warm up.

Is There A Difference Between Coolant And Antifreeze?

“Coolant” and “antifreeze” are often used interchangeably. This is fair enough – they’re more or less the same thing. However, there’s a subtle difference to be aware of.

Coolant is the liquid flowing through the engine to cool it. This liquid absorbs heat straight from the engine’s metal surfaces before being pumped through to the radiator. A fan cools it, dissipating the heat into the air.

Antifreeze is the liquid additive added to the water to prevent it from freezing. It includes glycol (full terms: either “propylene glycol” or “ethylene glycol”).

Technically, the motors in modern cars are known as “water-cooled engines.” However, this water would freeze in winter in most climates, leaving your engine inoperable and your car permanently stationary. It would also boil in summer and therefore wouldn’t remove heat.

Antifreeze prevents your car’s coolant system from freezing up by lowering the temperature at which the combined liquid (the “coolant”) freezes.

In general, a coolant ratio is around 1:1 (often written as “50/50”) for antifreeze to distilled water. In colder climates, the ratio may include more parts of antifreeze.

How Does Coolant Work?

As soon as you turn the engine on, the coolant begins to flow through pipes and channels, directly brushing against the engine’s soon-to-be-hot metal surfaces. It’s powered by the water pump, usually driven by the crankshaft pulley.

Once the engine’s warmed up (which can take up to ten or fifteen minutes, depending on your climate and the season), the thermostat opens, allowing coolant to flow to the radiator.

Hoses direct the coolant to the radiator. There are two types of radiators: cross-flow and down-flow – the following example is a down-flow radiator.

The coolant goes in at the top (into an expansion tank or header tank) and comes out at the bottom through another tank. In the process, it descends through a series of honeycomb-like metal passages with a network of fins to maximize its heat transfer. This is the main structure of the radiator you see when looking at it.

You’ll see a radiator fan behind this network of channels and fins. This is electrically powered and draws cold air in, sucking it across the cooling fins. The air removes the heat from the radiator and thus cools the liquid coolant.

The coolant then flows back around the engine again. This process is always happening and only stops when you turn your car’s engine off.

What Type Of Coolant Should I Use?

The process of adding coolant to your car is straightforward. Read further down to see the exact procedure. However, first, you must ensure you’re getting the correct type of coolant/antifreeze.

Along with glycol (antifreeze), it contains additives such as phosphates and silicones. These soften the water, remove grease, and protect the metal.

Orange coolant contains Organic Acid Technologies (OAT). If your car was built relatively recently, it’s more likely to use this type of antifreeze.

Additives within orange coolant include compounds that prevent the build-up of rust and corrosion. They’re created to protect the aluminum and other metal components without affecting the non-metal parts. Orange coolant tends to last a lot longer than green coolant.

Hybrid Organic Acid Technology is another type of modern coolant. It contains organic acid and silicates and is designed to prevent rust and corrosion. Of course, it also includes glycol to stop the water from freezing.

Can I Add Any Coolant To My Car?

Make sure you use the correct coolant. You’ll find exactly which type you need in your owner’s manual. Don’t deviate from it!

Sometimes, you might need to flush the system out before refilling it. You’ll need a mechanic’s help and probably have to pay around $100.

Don’t mix coolants! This can result in a thicker-than-it-should-be liquid – almost a gel-like substance. The water pump won’t be able to send this around the engine easily, and it won’t remove the heat effectively. As such, it’s crucial to use the right type.

How To Add Coolant To Your Car

Adding coolant to your car is an extremely simple process. Open the hood with the engine cold (probably half an hour after you’ve finished driving).

Find the coolant expansion tank (also known as the coolant reservoir). This will have “MIN” and “MAX” marks on the side and contain a colored liquid. Remove the cap. This is where to put coolant in your car.

Can you add coolant to the reservoir when the engine is hot? No. The engine must be cold. If it’s warm, the pressurized coolant system will spit steam and hot water, scalding your hand.

Check the type of coolant you need using your owner’s manual. It should be the same color as what you already have in the system. If not, take it to a local shop and have them do a full coolant flush and replacement.

At the same point, you should check the water ratio you should be using. Use softened water, if possible. Again, this information will be in the owner’s manual. Don’t deviate too much from it, but equally, don’t overstress about pinpoint accuracy.

Replace the cap. That’s it! You’re all done.

If you notice the temperature gauge rising too high while driving, there could be a deeper problem. Take your car to a local mechanic for them to take a look.

Some people might have talked about removing their water pump or coolant tank. Don’t do this!

Drag racers sometimes employ this trick because the water pump puts drag on the crankshaft, slightly decreasing horsepower. In a drag racing situation, this is great. The engine isn’t running long enough for lack of coolant to make much difference.

However, it’s a catastrophically harmful plan for the car you drive daily. Without coolant, your engine will crack, seize, and generally break (probably terminally) within ten or fifteen minutes.

Some will tell you that you should only use antifreeze in your coolant system – without water.

However, water is still needed for the actual cooling process. If you only use pure antifreeze, the additives will settle, and the engine will run hot. The glycol in pure antifreeze can’t effectively remove the heat from the engine, so you’ll end up with all sorts of problems.

Follow the instructions from the manufacturer and coolant company. In most cases, you’re aiming for about a 1:1 mix.

In the same vein, you shouldn’t use water solely without antifreeze. This will lead to a broken engine when the environment reaches freezing temperatures and could also cause corrosion problems.

You may have read online advice to avoid tap water and instead use distilled or de-ionized water. Don’t follow that advice.

Depending on where you’re from, tap water is usually hard – it contains many minerals, most notably calcium and magnesium. These become separated from the H2O in the coolant system and leave deposits in the radiator and channels, inhibiting flow and heat transfer.

Instead, some recommend using distilled or de-ionized water. These remove the minerals from the water, leaving it “pure.” However, this creates an “ion-hungry” water. The liquid will strip ions from the metal as it flows past, doing damage in its own way.

The best option is softened water. While this removes the minerals, they’re replaced with sodium ions. These aren’t damaging to your coolant system and mean the water isn’t searching for extra ions (to use a simple analogy). Thus, it protects the metal part of your car’s coolant system while meaning there are far fewer mineral deposits, too.

In summary, use softened, not distilled or de-ionized, water. 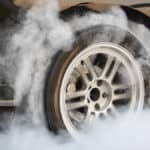 How To Do A Burnout In An Automatic Car