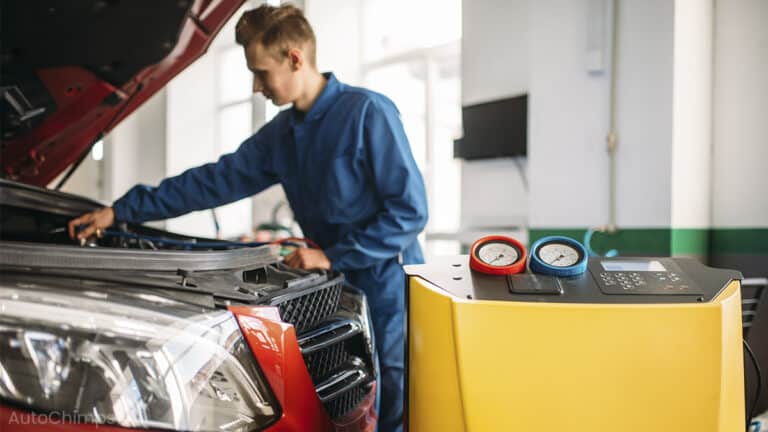 A car’s air conditioning system uses a refrigerant. This is pumped through a series of pipes and components by the compressor.

Along the way, it changes between high and low-pressure liquids and gases. Passing through the evaporator and condenser means it can absorb heat and moisture from the air. Thus, you get that dry, cooling effect.

R-12 is now illegal to import or produce. So, you might wonder if you can get a technician to put R-134a in instead.

In short? No way!

This guide will explain why you should never put R-134a in an R-12 system.

Both of these are refrigerant gases used in automotive air conditioning systems.

You’ll find R-12 in most cars on the road today built before 1995. It’s an efficient gas for removing the heat from your cabin’s air. However, it’s almost unbelievably damaging to the environment if it escapes.

You might also know it by its brand name, Freon. This also encompasses refrigerants like R-22 (used in household HVAC applications). You can’t mix different types of Freon, either.

It was, therefore, replaced with R-134a. While this isn’t exactly perfect for the ozone layer either, it’s far less destructive than R-12.

R-134a is used in most cars constructed between 1995 and 2015. At this point, most manufacturers began phasing it into their vehicles.

R-134a and R-12 are both efficient refrigerants. An air conditioning technician tops your car up with the correct type via a special machine. This connects to your car’s AC high- and low-pressure valves.

Chemically, the two are completely different.

Sure, they both have some Cs and Fs in them, but these two are as different as they get.

Many substances come with a GWP. This represents how bad it is for the ozone layer compared to carbon dioxide.

For reference, 1 unit of CO2 has a GWP of 1 (because it is the reference for all other readings).

R-12’s GWP is so high because of its high chlorine content.

To help you understand how potent that is: the average AC system holds just under a kilogram of refrigerant. The EPA estimates that an average American car produces 4.6 tons of CO2 annually.

If you accidentally (or purposefully) released the entire contents of your R-12 system into the atmosphere, it’s the equivalent of driving a 22 mpg car for more than two full years.

R-134a is much better, but of course, it’s still not perfect.

These days, most cars are fitted with R-1234yf. This is the newest refrigerant gas, phasing in to replace R-134a.

R-1234yf has a GWP of less than 1. In the event of a crash or accidental leakage, it’s far less damaging. The only downside is its greater cost, which will likely reduce as demand and supply increase.

Have you read an online article about mixing the two? It’s wrong. Don’t listen to that author. You cannot mix R-134a and R-12 in a car’s AC system.

Understandably, you might be clinging onto your R-12 system, unwilling to let go. R-12 is widely accepted as being a highly efficient cooling refrigerant. But it’s now illegal, and with good reason. If you still want a cool car, it’s time to move on.

It’s also illegal to work on your air conditioning system yourself. Well, to handle the refrigerant, specifically.

As you’ve seen above, R-12 (Freon) is terrible for the environment. R-134a is much better, but it’s still awful.

It’s against the law to release any air conditioning refrigerant into the atmosphere.

A $50 kit from Amazon will not cut it, either. Think about it. If these were reliable and high-quality, auto shops would purchase them instead of their $5,000 re-gas machines.

Why else can’t you do this yourself? Well, you have to measure the precise amount of refrigerant, both to remove and add.

You’ll also need to insert the correct quantity of oil (lubricant). Without this, the AC will break.

So don’t. Always leave air conditioning jobs to the professionals.

If you put R-134a in an R-12 system, the refrigerant will overheat. The pipe interiors will get coated with a black layer. On top of all this, your system will have little to no cooling effect whatsoever.

In short, don’t even think about putting R-134a in an R-12 air conditioning system. It’s not worth it for your car, the environment, and the sake of keeping the law.

Freon (R-12) is illegal to produce or import as of 2020, so you can’t use this. Recycled Freon might be available in some locations. The legalities of this are unclear, though.

As such, you’ll need to have an air conditioning specialist modify or replace your R-12 system. Look for local, trusted businesses.

It will cost you a few hundred dollars, possibly reaching the thousands. This depends on the precise nature of the work done (modification, retrofitting, or replacement).

It makes more sense to get an R-1234yf-based system instead. This is likely to outlast R-134a.

After a licensed modification or replacement, you can legally and safely top your AC up with the required refrigerant. 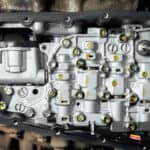