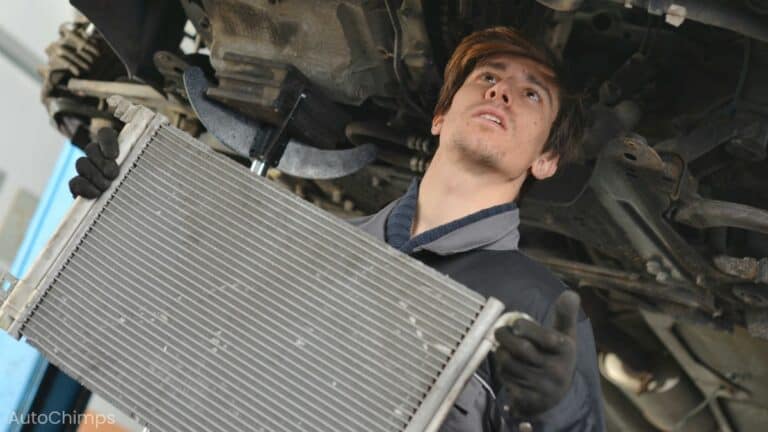 The radiator plays a critical role in your car’s cooling system.

This guide will teach you everything you need to know about radiator replacement and possible repair costs.

Seeing liquid under your hood often suggests a coolant leak. The liquid is usually colorful, with variations including pink, green, and orange.

The coolant may have a sweet smell to it. However, it is toxic to animals such as cats and dogs. It is, therefore, important to clean it off and prevent animals from ingesting it.

Having taken care of the health of animals, it’s time to focus on the health of your car. How much does it cost to replace and/or repair a radiator?

How much does a radiator even cost?

The answer, like any other in the automotive world, depends on multiple factors, including the car model and type of radiator. As a rough estimate, the radiator replacement cost should range from around $300 to over $1000.

What Does A Radiator Do?

The radiator is usually located in the front of the car. Today, most cars have radiators, but you might be surprised to hear that some do not.

Usually, when a radiator is not used, the cars in question are vintage. They use an air-cooled engine, meaning the air goes directly into the engine compartment and cools it.

As an internal combustion engine works and produces power, a great amount of heat is generated. If this heat is not dealt with, the engine could be severely damaged.

The plastic parts of the engine will melt, and components made of aluminum and other metals could crack and swell, causing serious damage.

For example, the head gasket could crack, allowing water to leak into the cylinders. To learn more, head to our article explaining how car engines work.

In modern cars, the cooling system consists of several components where the radiator handles the main cooling.

The cooling system consists of other dedicated components in addition to the radiator. Most modern cooling systems feature the following:

In this guide, most attention will be given to the radiator itself, but other components will be briefly touched upon. This will help you gain a better understanding of how the cooling system works and determine if it really is the radiator that is faulty.

The engine is cooled with the help of antifreeze. The antifreeze is circulated in the cooling system by the water pump, also called the coolant pump.

After the coolant has been passed through the radiator, the liquid is cold, providing a cooling effect. The role of the water pump is to send the cooling liquid to the engine block and cylinder head gasket.

The thermostat is located between the engine and the radiator. It ensures that no coolant is running through the engine unless it has reached its operating temperature.

When the engine reaches a point higher temperature, usually above 200°F, the thermostat valve opens, letting the coolant pass through and cool the engine.

When this happens, the cooling fan assists the radiator by drawing more air into it. As a result, the radiator will have more to work with, and the liquid will be cooled appropriately.

Rear-engined cars generally have a tougher time cooling the engine. As a solution, a more powerful cooling fan is installed.

The cooling fan is operated by a fan switch which will turn the fan on or off, depending on the current engine temperature.

If you have ever noticed a fan continuing to operate after you have turned off the car, it is the cooling fan working to cool the engine down.

How Does A Radiator Work?

Now that we have established how the different components of the cooling system work, it’s time to talk about the component that actually does the cooling: the radiator!

The radiator consists of tubes, where the water circulates, and fins, which air passes through to cool the tubes.

As the coolant is heated up by the engine, it will enter the radiator as a hot liquid. As it passes through the radiator, air from the outside enters the radiator, which cools the liquid and sends it back to the engine.

The Signs Of A Broken Radiator

As the radiator plays a central role in the car’s cooling system, the most obvious sign of radiator issues is an overheated engine.

If you see any smoke coming out of the engine or the temperature warning lights up on your dashboard, stop your car as soon as possible.

Keep in mind that any of the other cooling system components, such as the water pump, could also cause an overheated engine. You should also ensure that there is enough coolant available for the car.

A common sign of a broken radiator is leakage. As previously mentioned, the coolant is usually a distinctive color and has a sweet smell.

In addition to maintaining your car regularly, as you leave your parking spot, it’s worth checking for any fluid that may have leaked. This will enable you to fix the problem before any serious issues arise.

A coolant leak under your car is not the only possible symptom. Other fluids that may leak include coolant, oil, transmission fluid, and brake fluid.

Cost Of Repairing A Radiator

A replacement will usually be needed if the radiator is damaged and no longer functions. This mostly applies to structural damage to a radiator.

An old radiator could be damaged by a buildup of rust, in that case, a replacement is needed. Leaks can sometimes be repaired, depending on the extent of the leakage.

In addition to leaks and rust, a radiator is susceptible to clogging. If that occurs, either the radiator tubes are clogged or the front radiator has been obstructed by debris.

If it is the latter issue, it can be cleaned with pressurized water or compressed air. Clogged tubes must be flushed out, which will set you back $100 to $150.

A damaged radiator that cannot be repaired will need to be replaced. Here, the prices vary depending on the car you drive.

The most reliable way to get a more precise cost is to get an estimate from your mechanic. The cost varies from $300 to over $1000. On average, the cost is about $700.

In many cases where the radiator is not functioning, it is due to a hose leak. If that is the case, a simple hose replacement should suffice.

A hose replacement will set you back approximately $150.

The radiator plays a central role in the engine’s cooling system. The most obvious sign of a faulty radiator is overheating.

Leaks are also very common and may suggest a leak in one of the hoses that feed the coolant into the radiator. If that is the case, a simple replacement will cost around $150.

Sometimes, your radiator will be clogged and will therefore need a coolant flush. This procedure costs approximately $100 to $150.

If it turns out that your radiator has damage, such as holes or cracks, the whole radiator must be replaced.

Make it a habit to look for any leaks that your car might leave at its parking spot. This is a reliable indicator of potential problems related to your coolant system, lubrication system, transmission, and more. 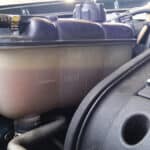