The ‘Service StabiliTrak’ refers to GM’s ESC system. This is (generally speaking) the combination of traction control and ABS.

But what does it mean? What exactly is going on? That’s what this guide will walk you through.

What is an Electronic Stability Program (ESP)?

These systems use computers to measure how each wheel reacts to the driver’s input. Nowadays, they’re an umbrella term encompassing traction control (TCS) and anti-lock braking (ABS).

Traction control increases or reduces power to the wheels if you lose grip. ABS systems pulse the brakes if they lock up under braking, helping you stop faster and even steer.

You have to go back several decades to find a vehicle without some early form of ESP.

Most would agree that the original concept stems from the 1970s, with various systems developed by companies like Buick and Mercedes.

At the start of 2012, ESP systems became mandatory on all new models. By 2014, it was required on every single new car.

You’ll find more information about ESP (StabiliTrak) in your owner’s manual. Read it to understand the system’s limitations and how it tries to help out in hazardous situations.

Overall, just because you have ESP doesn’t mean you should drive dangerously! It’s a last-resort assist and shouldn’t be treated as an everyday safety net.

StabiliTrak is GM’s version of an ESP system.

In all standard road-driving situations, StabiliTrak will help, not hinder. It’s automatically on for all equipped vehicles. While it’s possible to turn it off, it’s strongly advised not to do this.

Manufacturers also often put their own names on these systems. For example, Ford’s is known as AdvanceTrac. Porsche models come with PSM (Porsche Stability Management).

In reality, all these systems are very similar, despite being created independently.

This guide focuses on General Motors and their answer: StabiliTrak.

StabiliTrak’s primary goal is to find traction for the vehicle. It then points it in the direction of your steering wheel’s angle.

Note: harshly overcorrecting during a skid can confuse the system. It’s essential to remain calm and move the wheel gently should the need ever arrive.

How Does StabiliTrak Work?

Explaining how any detailed computer program works is a daunting and impossible task. A team of some of the world’s best electrical engineers will have spent years developing it.

Remember, too, that every model year will likely have seen upgrades and changes.

In general, StabiliTrak uses several sensors around the steering system and brakes.

By comparing and analyzing the data, StabiliTrak knows when the car isn’t behaving as it should.

For example, the wheels shouldn’t lock up under braking. The ABS will pulse the brake actuators if the sensors detect that one wheel isn’t turning. This allows it to spin at a controlled rate, increasing grip and reducing tire wear.

StabiliTrak will reduce power to the wheel(s) losing traction, bringing them back under control. To take another example, a rear-wheel-drive model may slip if you press the throttle pedal too hard in a corner. This is especially likely if the road surface is slippery.

In most circumstances, StabiliTrak will combine ABS and TCS for optimal car control.

What Does Service StabiliTrak Mean?

So, Service StabiliTrak has popped up on your display. But what does it mean?

In short, the system isn’t working as it should. In some cases, this is simply down to a glitch on startup. Restart your GM vehicle (wait a minute or so) to see if the message pops up again.

If it persists, you’ll need to take your car to a GM mechanic for diagnosis and repair.

You’ll need a GM specialist. That doesn’t necessarily mean a dealership, though. Take the time to get quotes and research nearby shops to find the best one.

The problem may lie with a sensor, a connection, or an ECU fault. These are usually far too intricate to attempt a DIY repair.

An aftermarket installation, such as bigger wheels or a performance chip, could also have a negative effect.

Can You Drive With ‘Service StabiliTrak’ On?

Should you drive with the Service StabiliTrak message on? Absolutely not.

But can you? Technically, yes. Your car will still work and feel relatively normal.

The world is full of people telling you not to worry about it. “It’s not that important,” they’ll say.

This has been engineered into the system to warn you. Don’t ignore it! If it weren’t meaningful, there wouldn’t be a warning message on your car’s display.

The misconception that StabiliTrak isn’t that important probably originates from the idea that it doesn’t do much.

To some extent, that’s true. ABS and TCS only noticeably activate under poor road conditions such as heavy rain, ice, or mud. Even then, it’s pretty rare.

However, StabiliTrak – and all ESP systems – are always working. Even when you can’t tell. It keeps your car planted on the road whenever you need to make a sharp turn; this includes curves in the street, roundabouts, turns on hillsides, etc.

Most importantly, it helps prevent your car from rolling if you have to swerve to avoid pedestrians or a crash ahead of you.

How To Fix StabiliTrak

If you’ve installed larger wheels, try replacing them with the old ones. This will probably cause ‘Service StabiliTrak’ to turn off.

It stems from the sensors being unsure about the wheel speed and angle. These – by the nature of reality – alter when you add bigger wheels.

Otherwise, go to a GM mechanic. Don’t fiddle with your ECU yourself unless you have years of training and experience.

They’ll use diagnostic tools to narrow down the problem.

The most likely of these is a faulty sensor. Expect to pay around $400 on average. Of course, this depends on the exact sensor and the shop’s labor rate.

‘Service StabiliTrak’ might mean the system isn’t working. If this is the case, you could find yourself in a hazardous situation.

Fifth Gear produces the video shown above with an experienced stunt team and safety professionals. Importantly, it shows what can happen in high-speed emergencies without ESC.

If your car shows the ‘Service StabiliTrak’ message, you should find a nearby GM specialist. They’ll diagnose the issue and repair it for you.

Don’t leave it until it’s too late. 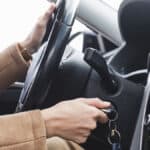 Car Struggles To Start But Runs Fine? Here’s Why