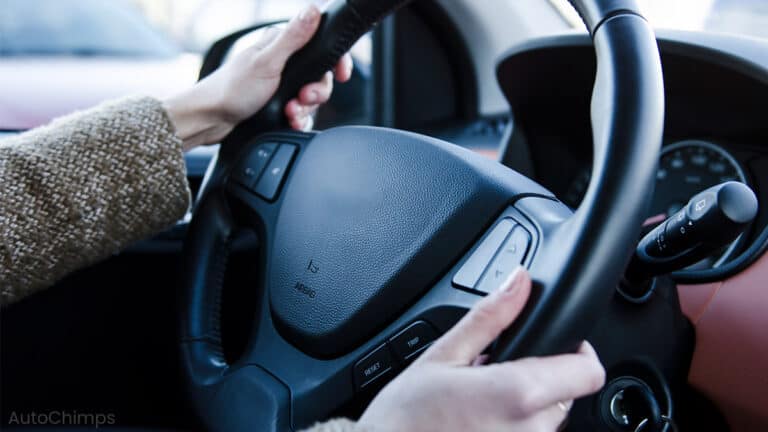 This guide will provide possible causes of why you may feel shaking through the steering wheel.

As you’ll see, there are many possibilities, and not all stem from steering components! The most likely cause is imbalanced wheels. This will get worse the faster you travel.

It’s imperative to fix a shaking steering wheel as soon as possible to ensure your car is safe.

If you can’t find the source of the problem, go to a trusted mechanic for diagnosis. You’ll probably need to head that way for a repair anyway.

In this guide, I will explain why your steering wheel might be shaking at high or low speeds.

This section runs through the most likely causes of steering wheel vibration when you feel it at both high and low speeds.

Note that some causes are listed further through the guide under ‘just high’ or ‘just low’ speeds.

Never drive with a flat tire! It’s perilous and could damage the wheel itself, never mind lead to a serious accident.

The flat tire causes the corner of the car to sit lower on the road. You can also feel the vibrations from the asphalt straight through the steering wheel.

All of these combine to make a very unpleasant experience. You’ll feel a flat tire at any speed, especially at the front.

Of course, this is nothing to do with the steering system.

Misfires put your entire engine out of balance. The resultant shaking can be felt throughout the entire vehicle.

Since you’re holding the steering wheel, you often notice it here first. Misfires feel more prevalent at idle and when the engine is under heavy load (high revs or hard acceleration).

Ball joints connect the front wheel suspension arms to the wheel hub, allowing for independent suspension. They work similarly to a ball-and-socket joint in the human body (such as your shoulder or hip).

When a ball joint breaks, the suspension will face too much or too little resistance. This makes your ride less comfortable and could create a wobble in the steering wheel.

Broken ball joints are a common problem. It’s normal to have to replace one every year or two.

Not every wheel is a perfect, balanced circle. There will always be manufacturer defects.

The wheel itself could be damaged while being built, but it’s more likely to stem from an accident.

The misshaped wheel wobbles as it rolls, creating that shaking feeling. It’ll be more noticeable at higher speeds, but – in severe cases – you might also feel it when going slowly.

The steering column is a long rod (made up of several sections) connecting the steering wheel to the box.

If it warps or becomes otherwise damaged, you’ll need it inspected and replaced.

Damage like this is most likely to occur in an accident. Bear in mind that it could have happened to a previous owner, with the symptoms worsening over time.

On the end of the steering column, there’s a pinion gear. This meshes with the rack inside the rack housing.

Severe damage (such as hitting a curb with some force) could break or warp the pinion or the teeth on the rack. A lack of power steering fluid could also present lubrication and rust issues.

These could result in the steering wheel shaking at any speed. It’ll be most alarming while turning.

Wheel bearings don’t break quite so often as the internet makes out. In most cases, they last longer than the vehicle they’re fitted to.

But a broken wheel bearing is still possible. It’ll cause the wheels to wobble under any rotational movement. When it gets severe enough, you’ll notice this at any speed (but especially when going fast).

Driveshafts transfer the rotational power from the transmission (or final drive) to the wheels.

They should be precisely machined and perfectly straight. Most people never experience any issues.

A warped drive shaft could happen in an accident. This could lead to severe wobbling, misaligned wheels, and potentially hazardous seizing.

Get a damaged drive shaft repaired as soon as possible.

The tie rods connect the wheels to the steering rack via the tie rod ends. They’re also called track rods.

If one of these warps or comes loose, the wheel won’t be sitting in the correct location.

Note: this problem usually leads to a wheel being out of alignment, not shaking.

Any suspension components could cause one side of the car to behave differently from the other. The resulting imbalance leads to a shaking feeling which you might feel through the steering wheel.

Most modern cars use electric power steering. This involves several sensors and an electric motor on the steering column to assist.

A severe fault could mean the assisting motor wrestles with the steering column. EPS systems can fail, but it would be unusual for them to present symptoms like this.

Hydraulic power steering is also still popular. The pump and valve system operates a piston within the steering rack. This effectively ‘pushes’ in the same direction you’re turning, reducing your effort.

If the hydraulic system fails, it may feel like the steering wheel is wobbling.

Steering Wheel Shakes At High Speeds (Or When Accelerating)

In most of these cases, the ‘shaking’ is technically present all the time. However, as you speed up, it’ll become more apparent.

When someone says their car is shaking, imbalanced tires are usually the reason, especially if the front wheels are the ones affected.

Technicians place wheels on tire balancer machines to check their balance. They add wheel weights to reduce any wobble to a negligible amount.

Note: despite popular opinion, misaligned wheels don’t lead to ‘wobbling’. Instead, you’ll have a specific strip of wear down one side of the tire.

Flat spots are areas of a tire with much less tread than the rest of it.

They can be caused by the wheel locking up under braking or the car sitting stationary for a long time.

As the wheel rotates when you drive, it’ll drop slightly every time the flat spot contacts the road, a bit like a limp.

This is difficult to notice at low speeds but becomes a more obvious vibration when driving fast.

The brake calipers hold a piston (or two) and push the brake pads onto the rotor face.

When a caliper’s piston seizes, it might always hold the brake on.

The imbalanced forces across the two wheels lead to a shaking sensation through the steering wheel.

Again, an imbalanced axle isn’t a common occurrence. It’s only really possible if your car gets in an accident or the undercarriage hits something hard (such as a boulder while off-roading).

You might feel the resultant shaking at all speeds, but it’ll get worse as you go faster.

Motor mounts hold your engine in place. They’re made of rubber and similar materials, so you don’t feel vibrations through your car.

Of course, if the mounts break, you’ll be more aware of these uncomfortable sensations. It’ll be most apparent when the engine is at higher revs.

It’s unusual to find a case where a steering wheel that only shakes at low speeds.

In some cases, misfires (mentioned above) can feel more prevalent when the revs are low.

Otherwise, consider the other main drivetrain component: the transmission.

At low speeds, forces and vibrations from the transmission could transmit through the steering wheel.

They might be more evident at lower speeds because the drivetrain is, in some ways, under more strain. For example, when you’re slowing to a stop or setting off, the engine and transmission speeds must mesh without causing the motor to stall.

You could notice vibrations through the steering wheel from the transmission if: 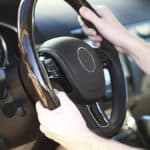