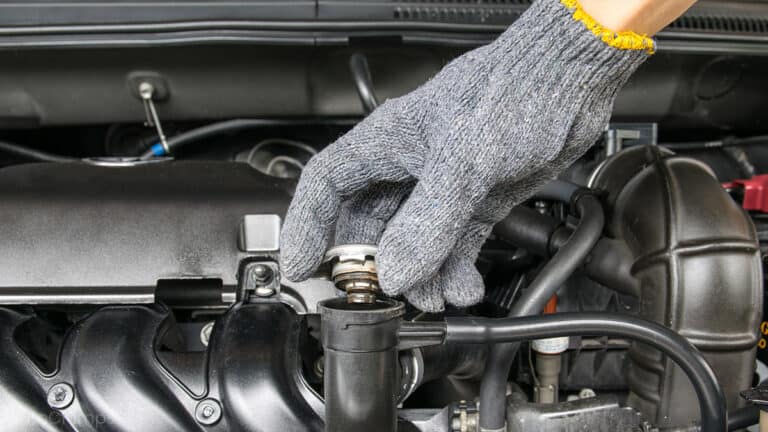 A radiator cap is an essential part of your car’s coolant system. It could cause several (potentially severe) problems when it goes bad.

You might suspect that you have a bad radiator cap. In reality, this is a relatively rare issue. It’s still worth checking – you’re more likely to rule it out than find that it’s the root cause, though.

In this detailed guide, I will walk you through the main symptoms of a bad radiator cap and how much it costs to replace it.

Warning: You should wait until the engine cools before opening the radiator cap. It pressurizes its contents. Removing it while the motor’s hot will result in hot water vapor bursting out and scalding your hand. It’s also advisable to cover the cap with a thick cloth to protect yourself, just in case.

What Is A Car Radiator Cap?

Coolant keeps your engine… well, cool. It prevents the metal block from overheating, making it lock up (seize) and stop working.

The liquid itself is a combination of de-ionized water and antifreeze. This prevents it from freezing in winter or cold climates.

It’s also crucial to prevent the water in the coolant from boiling. Air bubbles can’t cool anywhere near as effectively as a liquid. If this were to happen, the system wouldn’t work.

Because of this, the coolant system is ‘closed’. In other words, it’s pressurized – there’s no way for the contents to escape. This raises the boiling point.

It also prevents water vapor from escaping and evaporating.

A radiator cap is the sealing cap for the coolant radiator.

When a certain psi is reached, a spring-loaded valve in the cap diverts coolant into the ‘expansion tank’ (or ‘overflow tank’ or ‘reservoir’). The liquid returns to the main system through the reverse process (a vacuum), keeping the pressure in constant homeostasis.

This pressure is listed on the cap and in the car’s owner’s manual. Typically, it’ll be 13 or 16 psi.

In short, it keeps the system sealed at optimal pressure and allows you to see inside if necessary.

Nowadays, you’ll use the reservoir cap much more often. This one seals the tank where you can see the coolant level. It’s just as important, but you’ll top the liquid up from here.

What Happens When A Radiator Cap Goes Bad?

Remember, the radiator cap is a spring-loaded valve, sealing the coolant system.

If it stops working, the valve could get stuck in one of its ‘open’ or ‘closed’ positions. The seals might also get damaged, causing the system to lose pressure.

Here are a few of the most likely symptoms you’ll notice.

Most (especially those toward the end) are typical of any coolant problem, so noticing them doesn’t necessarily pin the issue down to a radiator cap.

They’re listed in order of relevance to radiator cap issues.

#1 Too Much Coolant In The Expansion Tank

If you notice this, your suspicions should edge toward a bad radiator cap.

Coolant is sent to the tank under pressure and returns via the opposite principle (vacuum). Everything should be regulated and precise.

If the cap valve sticks open, the coolant flow between the reservoir and the rest of the system is unregulated. You might see too much or too little liquid in the tank.

#2 White Streaks By The Radiator Cap

You might notice white streaks pouring down the radiator or nearby the cap.

This is evidence of leaking coolant while the engine is running. You can clearly see that it’s leaking at the cap.

Replacing the bad radiator cap with a new one should fix your problem. Remember, though, that there may be other leaks.

Excessive or insufficient pressure in the coolant system is harmful.

When certain components fail, they’ll develop a leak (sometimes visible underneath a car or as splashes in the engine bay). You’ll also notice overheating.

In particular, issues could develop in the water pump or radiator. A pressure test would help reveal the precise source.

The radiator cap is responsible for pressure regulation. Therefore, the underlying cause might be a fault with it.

The rubber hoses transporting the liquid throughout the system are subject to constant wear. It isn’t unusual to find they’re becoming tired.

That said, keep a close eye out for excessively hard or soft hoses. Anything that feels beyond the norm.

Both are serious since the hoses are close to absolute failure. At this point, all your coolant will leak out, leading to a multitude of error messages, warning lights, and engine overheating.

The radiator cap could be the reason for high/low system pressure.

The radiator cap impacts the system’s pressure level and could even be the source of a leak.

As the pressure reduces, the boiling point of the coolant increases. Its efficiency, therefore, decreases. If there’s a leak (which could come from the cap but is more likely to stem from a hose), vapors could escape.

Depending on the severity, you might notice an immediate drop in the expansion tank.

The coolant is literally steaming out into the atmosphere. As the levels reduce, your engine will start to run hotter, as visible on the dashboard gauge.

You should check your coolant monthly and, if necessary, top it up. If you need to add liquid two months in a row or notice other symptoms, go to a car mechanic.

If the coolant pressure is too low or too high, it won’t cool your engine effectively.

Do you notice the needle on the coolant temperature gauge reading higher than usual? It’s worth pulling over in a safe location and allowing the engine to cool.

Stop somewhere safe if the high temperature persists (or, worse, if it enters the red zone). Call for breakdown assistance via a tow truck.

Ignoring this could lead to engine seizure – an irreparable and unimaginably expensive ‘oops’.

#7 Steam From The Engine Bay When Hot

Do you notice steam or water vapor rising from the engine bay when you open the hood?

This indicates some kind of ‘hot water’ and could possibly stem from the coolant system leaking.

The leak could come from the radiator cap. However, a bad radiator cap could also cause high/low pressure within the system, making a gas leak from a hose or other component more likely.

How Do You Know If You Have A Bad Radiator Cap?

Coolant problems usually stem from something other than the radiator cap. If you notice symptoms of a coolant issue, consider the following checks and tests:

You could even replace the radiator cap by default to save yourself some time (if you have the budget). You won’t usually have to pay much at all.

Changing a bad radiator cap is about as easy as anything automotive gets.

When you purchase a new one, ensure it meets the specifications of the old one. Only buy an OEM component.

An improper radiator cap could lead to even more severe coolant problems.

Run the car and check there aren’t any obvious leaks. Keep an eye on the temperature gauge over the next few days.

As mentioned, coolant system problems rarely stem from the radiator cap. It’s unfortunate because it’s such an easy (and cheap) repair.

A standard OEM radiator cap costs up to $25. Most will come in at around $10.

You can replace it yourself to save on labor costs. Buy a new radiator cap from a trusted hardware store or automotive supplier (rather than Amazon) to ensure you get a high-quality product.

You might need to repair other coolant components at the same time. These will, of course, cost more.

If you take your car to a mechanic, the charge shouldn’t be too much more. Labor time is virtually nonexistent (a couple of minutes, at most).

However, you may also need to pay for diagnosis charges (around $40 or $50) or other related fixes.

Conclusion: Do You Have A Bad Radiator Cap?

Radiator caps are a mechanical component; like all others, they can fail. But it’s not that common.

Noticing any of the symptoms listed in this article is more likely to mean any of the following:

The dreaded blown head gasket is also a possible cause.

In the end, radiator caps are never expensive to replace. Swapping yours out for a new one might help to some degree, even if it doesn’t solve your immediate problem.

What Happens If You Overfill Coolant In A Car?