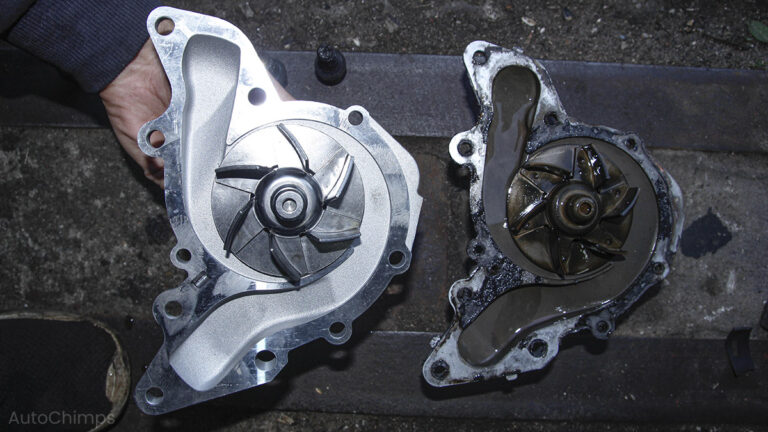 Many people – with good reason – describe the water pump as the beating heart of a car. Without it, the vehicle dies.

That’s a perfectly true statement (although many other components have the same critical value).

So what do you do when it’s on the way out? And how can you possibly know?

In this guide, I will walk you through the symptoms of a bad water pump.

What Is A Car’s Water Pump?

A water pump is the driving force within the coolant system. It uses centrifugal force and impeller fins to pump the liquid through the pipes, channels, and radiator, keeping the engine at its optimal running temperature.

There are two types of water pumps:

The only system offering mild cooling benefits without the water pump would be the oil. But this isn’t the oil’s primary job. It wouldn’t take long before the engine overheated and seized (irreparable damage).

All modern cars have ‘water-cooled’ engines. That is, they’re kept from overheating by a pressurized water system.

Antifreeze is added to the water (at the correct ratio) to prevent freezing and protect the system from mineral deposits. This mixture is known as ‘coolant’.

In the past, you can find many more air-cooled examples. The most well-known is the engine fitted to the original Volkswagen Beetle (or Bug). Many light aircraft also have air-cooled engines today.

It’s crucial to watch for signs of a bad water pump. Take extra care if you notice more than one of the below symptoms simultaneously.

Here are a few things to watch out for.

Everyone should be used to keeping their eyes on the engine temperature gauge.

This is measuring the temperature of the coolant. If it rises into the red range, this is a bad thing. It most often means a problem with the coolant pressure, oil pressure, or fuel injectors.

A failing water pump won’t be pumping enough (if any) coolant through the engine. Thus, there’s no way for it to cool down.

The root cause could be the bearings, axles, or impeller blades.

If you notice your engine overheating, pull over in a safe location and turn it off. Give it some time (at least half an hour) to cool before driving a little further.

In cases where the engine temperature rises too quickly, you’ll need to call your breakdown company.

An unstable engine coolant temperature is a potential sign of a failing water pump. However, it won’t have failed altogether. Not yet, at least.

A broken impeller blade inside the pump or failing bearings could mean the pressure is lower than it should be. This might make the cooling effectiveness poor under heavy engine loads.

The pump could also send intermittent amounts of coolant through the engine, producing the same symptom.

This means the cooling rate varies, which is what you see happening on the gauge.

You might notice a colorful liquid leaking underneath your engine. You’ll know this is coolant from its vibrant color and sweet smell, although a leak of this magnitude is unusual.

You can also see if the coolant levels in the reservoir are low. Ensure you check it when the engine is at the correct temperature (usually cool).

The most common area for the coolant to leak is the joins between the rubber hoses and metal components.

These are usually caused by tears or old, rusted clamps. The parts can be replaced without a whole lot of effort.

Coolant can leak from the water pump, although this is less likely. Drips could escape out from the bearing seals or water pump gasket.

Squealing Sound When The Engine Is Running

A coolant leak (mentioned above) could drip into the water pump’s bearings.

Over time, this washes the oil or grease away. The pulley wheel will turn too freely, and undue stress will be put on the bearings.

If these fail completely, the water pump won’t work – it will have no connection to what drives it.

There could also be a knock-on effect on other components. That’s especially relevant in the timing chain/belt models, where the consequences could be devastating.

Old belts most often cause squealing sounds, but it’s still worth checking out.

How Much Does A New Water Pump Cost?

It makes the most financial sense to you – the customer – to replace the entire component if any problems with the water pump are found.

Expect to pay about $300 for an externally-mounted pump.

This cost is made up of the following:

The timing cover must also be removed if you have a timing belt/chain water pump. Add another $200 or $300 in labor charges, bringing the total to around $600.

Sometimes, it’s logical to get the timing belt or chain swapped out here, too. You don’t have to, though.

Arguably the biggest car killer is a nonchalant attitude. If you notice anything unusual with your car, don’t bury your head in the sand. Go to a mechanic.

Even if you discover that everything’s fine, at least you know! The problem won’t worsen as you drive, and you can carry on confidently.

The earlier you catch problems like a failing water pump, the less damage they can do and the cheaper it’ll be.

In the meantime, keep up with good basic maintenance! In this context, check your coolant levels every month. Top it up if necessary. 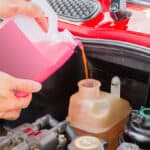 Can You Mix Antifreeze?