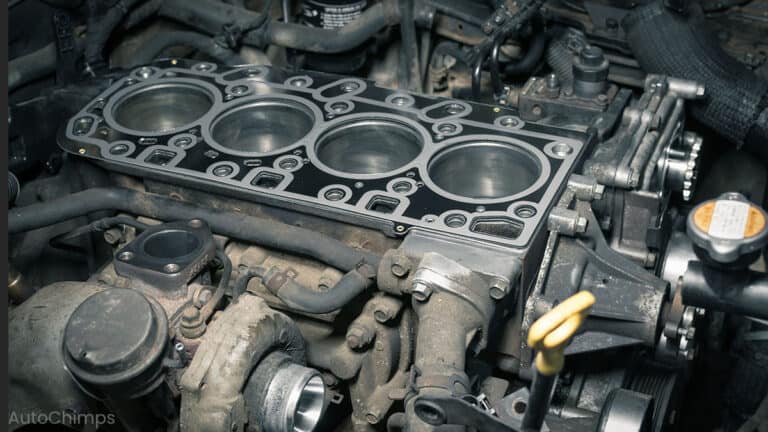 In the cylinder head, the valves, spark plugs, and other compartments lie. Below, the engine block is located where the cylinders are. In between these two structures lies the head gasket.

The head gasket prevents the different fluids from mixing with each other. A head gasket that is blown will leak and cause the fluids to mix, which can be catastrophic for multiple reasons.

Luckily there are some symptoms and signs of a bad head gasket that presents when a leak is present. This should be taken seriously to prevent further damage to the engine and other parts.

All these symptoms and signs will be listed below, so you know if something serious is happening to your car.

Let’s head down to it!

Mixed Fluids In The Engine

Before we get into the symptoms of a blown head gasket, it is beneficial to know different types of failures and, consequently, signs that may occur.

As previously stated, the head gasket lies as a seal between the cylinder head and the engine block.

On the level of the cylinder head, two different types of fluids circulate, oil and coolant.

On the other hand, at the engine block, fuel and air ignite to produce power with the help of pistons and the crankshaft.

A blown head gasket means that the sealing is defective and that the fluids of the cylinder head can mix with the engine block.

In other words, you may have oil or coolant in your combustion chamber.

It does not stop there, though. The fluids of the head gasket can mix with each other, meaning coolant and oil will mix and circulate in other parts of the car engine.

All these different combinations will lead to different types of signs and symptoms, which we will cover next.

White Smoke From The Exhaust

White smoke from the exhaust generally means that the coolant leaks inside the combustion chamber, evaporating and getting sent to the exhaust.

This differs from the normal white “smoke” that is typical for a cold day due to condensation.

Coolant in the combustion chamber will produce a thick white smoke that will be expelled in the exhaust.

If there is extensive damage to the head gasket and the coolant is violently leaking (pouring), there is a big risk that the engine will hydro-lock, as liquids are incompressible, unlike fuel and air.

It can be checked if the head gasket has been blown by removing the radiator cap and observing if there are any bubbles in the coolant.

If doing so, beware of doing it when the engine is cooled as the coolant may boil when exposed to air when hot. Also, this test may only confirm a blown head gasket but not exclude it.

Blue/Gray Smoke From The Exhaust

Turns out that the exhaust can tell you a lot about what is happening in the combustion chamber!

Blue or gray smoke from the exhaust indicated that oil is burning due to some kind of leak. A blown head gasket is a potential cause for this.

The exhaust may not only look different but also give out a burnt smell due to the oil burning in the combustion chamber.

Abnormal exhaust smoke can be due to many things, and the causes for it (for example, burning oil) can also be due to a variety of reasons and not only a blown head gasket.

As previously mentioned, the fluids can mix both ways. If coolant is mixed with oil, the latter will have a recognizable color and consistency resembling milkshake or mayonnaise (don’t eat it!).

Make sure to check the oil filler cap, as it is there where the frothy liquid will be best visualized. There may be a similar-looking layer of milky-colored liquid in the radiator cap.

A milky-colored oil will lose its lubrication properties, meaning that you should not let your engine run in that case, as there is a great risk that the engine parts will be destroyed by friction.

Regardless, an overheated engine will usually be seen when the head gasket has been blown, as the leakage of the coolant will compromise the cooling system.

It may be sufficient that engine oil gets in the cooling system for it to not work properly, leading to an overheated engine.

It is, therefore, important to make sure that the engine never overheats. If it does, check if there is enough coolant. If that does not help, there are a variety of reasons why your car is overheating.

Another possible sign of a cracked head gasket is the cylinders misfiring. A misfire itself can produce many symptoms, such as rough idling, poor acceleration, and abnormal noises coming from the engine.

In most cases, a misfire will produce an error code that can be scanned/read through an OBD2 scanner.

If the misfire is happening more often than not, a check engine light will most probably be illuminated.

When the air/fuel mixture in the combustion chamber ignites at a moment that is not optimal, engine knocking can be heard.

Engine knocking can be detrimental to your engine as the combustion occurs when the piston is in an awkward position.

Ignition in the combustion chamber produces pressure in areas it is not designed for, which, in turn, may seriously damage the pistons, crankshaft, and other parts of the engine.

While engine knocking can be detrimental to the engine, it does not have to. Nevertheless, if you do hear what you believe is knocking, you should turn off the engine and call a mechanic.

Sometimes the opposite of engine knocking may happen. A low engine compression does not have the proper conditions to produce effective power, if any at all.

However, a blown head gasket can lead to low engine compression without engine knocking, which usually has a better outcome when it comes to damage and repair.

For example, a blown head gasket may cause leakage of the contents in the combustion chamber, leading to low compression.

There may be several reasons why low engine compression is present, but whatever the reason, you should fix the problem as soon as possible and not drive the car until it is fixed.

The head gasket plays an important role in sealing the cylinder head and engine block from each other.

This is important as the engine block uses air and fuel to create power while the cylinder head contains coolant and oil to cool and lubricate the engine parts accordingly.

A blown head gasket is a head gasket where a leak is present, and this gives way for the different fluids to mix. This includes contamination of oil, coolant, air, and fuel.

Depending on the fluid mixed, different symptoms may show. For example, coolant that has been mixed into oil will give way to a milky-colored color that can best be seen at the oil cap.

Of course, not only is the color problem, but the effectiveness of each fluid. Oil mixed with coolant will lose its lubricative and protective properties.

A blown head gasket can produce a variety of symptoms, as mentioned in the article.

While buying a new head gasket is not very expensive, it is very labor-intensive, as reflected in the cost of repairing a blown head gasket.

Regardless of the symptoms, if you suspect a leak in the head gasket, you should stop your car and get it to a place where you can replace it by towing it.

Keep in mind that many of the symptoms that are commonly associated with a blown head gasket can be seen in less serious scenarios where the fix is relatively simple and cheap.

For example, an overheated engine can be due to an insufficient amount of coolant or a bad water pump.

Keep in mind that the greatest risk factor of a blown head gasket is an overheated engine.

You should therefore be cautious and make sure to fix any problem that may seem as insignificant as soon as possible. An easy fix can lead to a repair of several thousand dollars down the road. 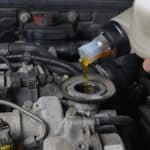 What Happens If You Fill Too Much Oil In Your Car Engine?