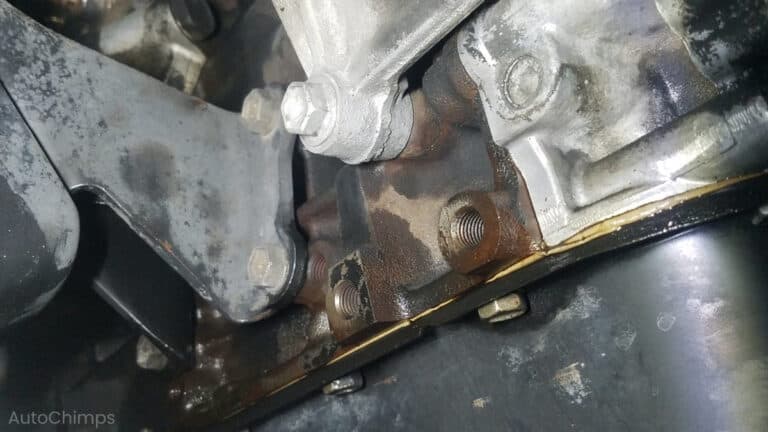 An oil leak is unsettling. It feels like watching your car bleed out in front of you.

Don’t worry, though. Most external oil leaks are relatively simple to find and fix.

Have you found an oil leak near the front of your car? The oil pan gasket could be the source.

In this guide, I will explain what the oil pan gasket is, what to watch out for, and how a mechanic will repair it. Put aside between $200 and $450 (on average), most of which is labor.

What Is A Leaking Oil Pan Gasket?

The oil pan, otherwise known as the sump, is attached to the bottom of the engine block.

It holds the motor oil, ready to be pumped through the block and the rest of the system.

There must be a tight seal between the oil pan and the base of the block. If there weren’t, engine oil would escape.

That’s the job of the oil pan gasket. It’s a thin metal gasket that sits between the two surfaces. It smooths over any microscopic machinery defects and creates a perfect seal.

Well, until it breaks or stops working, that is. At that point, it’s no longer functioning as a gasket, and a leak develops, allowing oil out.

The leak itself isn’t particularly dangerous. It’s an environmental hazard and could create a slippery surface, sure, but you don’t need to pull over immediately.

The leak isn’t the danger; it’s the resultant low oil. This could lead to damage to your engine.

So, even though the leak itself isn’t an immediate hazard, it still must be repaired immediately! Yes, you can drive on it, but the only reason should be to head to a mechanic to get it fixed.

If you have an oil leak (whether it’s the sump gasket or not), book your car at the shop now. Don’t leave it! It’ll only get worse and more expensive.

Here are some things you’d expect to see if you have an oil pan gasket leak.

The severity of all these symptoms depends on how bad the leak is.

For instance, a small leak – a few droplets here and there – won’t make any noticeable difference for some time. However, a more serious one could result in immediate, significant symptoms.

The first three symptoms to look at are very straightforward. You’ll be able to see an oil leak.

Note that it’s not necessarily a leak at the oil pan gasket. The most common location for oil to escape is the oil filter. It might be damaged or have been installed incorrectly.

Oil Coating The Outside Of The Sump

This may sound like the cheat’s answer, but it’s true. If there’s an oil leak at the sump gasket, you’ll see it.

Find the area where the oil pan bolts onto the bottom of the block. It’ll be pretty apparent.

You’re examining the surfaces just next to the join. Is there evidence of oil spilling out?

You might see oil dripping onto the outside of the oil pan (sump). That’s simply gravity at play.

You might also notice some splashes on the outside of the block, above the gasket. There probably won’t be as much here because it drips down.

Oil isn’t like coolant. It won’t boil away into thin air – it always leaves a trace and rarely goes very far.

The best way to spot evidence of oil coating the sump is to get underneath your car and look. It would be even simpler to ask a mechanic to put your car on a ramp and inspect it for you.

Evidence Of Oil On The Undercarriage

As per the previous section, you’d expect to see oil leaking underneath the engine block.

But it won’t all necessarily stay clinging to the sump. In most cases, you’ll find evidence of engine oil coating surfaces of the undercarriage behind the motor.

These could include the exhaust, transmission, steering components, lines, etc.

Again, it’s simple physics. The air resistance as your car drives along is blowing the oil droplets toward the back of the vehicle.

If there’s a lot of oil underneath your car – and you haven’t had an undercarriage spray recently (as is common in cold climates) – you have a leak.

Ensure your vehicle is safely in Park, with the parking brake on. Use a mechanic and a professional ramp to see your car’s underbody and check this. Alternatively, you could – with some difficulty – scramble underneath on your driveway.

Oil On The Ground Under Your Car

It’s almost too obvious to mention but look for a patch of oil on the ground underneath your car. For example, after leaving the vehicle overnight on your driveway, there could be an ominous black puddle.

The oil on the asphalt (or wherever you’re parked) is quite simply dripping out of your engine.

Your engine doesn’t have to stay running for an oil patch to develop, either. But if you leave it switched on for some time, expect a bigger puddle.

After you switch the engine off, the oil inside the block drips back down into the sump. As it moves past the gasket, some will escape if there’s a leak.

You’ll see the puddle directly underneath your engine (that is, for most cars, at the front, and near the transverse center).

An oil pan gasket leak is the same as any other leak in the system. The oil level will start to go down.

Of course, as mentioned, the worse the leak is, the quicker the oil level will reduce.

It’s good practice to check your oil level (using the dipstick) every month. It’s normal for your to lose a small amount of oil.

However, if the level has dropped below MIN (and you haven’t been on a long journey), there’s a problem.

Low oil levels may be accompanied by an oil warning light on your dashboard.

Although it isn’t the primary function of oil, it helps keep the engine cool.

If your oil levels are low, it might impact your motor’s ability to keep itself at operating temperature.

At first, you might notice the gauge rising higher than usual. Eventually, it’ll enter the red zone. You should stop driving at this point, or your engine might seize!

Turn it off and let it cool. Look for some visual signs of an oil leak while you’re at it, but don’t touch anything metal!

It’s worth calling for breakdown assistance.

This won’t be the same as when you have an internal leak, such as a blown head gasket. In this case, it’s often difficult to notice any unusual aromas.

When there’s a leak at the oil pan gasket, this oil could easily blow back onto the hot exhaust pipe. Droplets could also land on other warm components like the transmission housing.

While catching fire isn’t likely, there will be a very apparent smell. There could even be smoke floating up with a blue, filmy sheen.

As mentioned several times, the worse the leak, the more palpable the odor.

There are two probable causes for a leaking oil pan gasket.

Before getting into those, know it’s most likely not your fault. These things happen, and they’re designed to be (relatively) easy to replace.

The most common cause is general wear and tear. During an engine’s lifespan, the metal block and sump heat up and cool down thousands of times. This means they expand and contract.

Eventually, it’s perfectly normal for something to give. The gasket represents the contact point between the two; it’s the weak spot.

The other possibility is a significant impact. For example, if you go off-roading and hit a boulder with your oil pan.

This could instantly do enough damage to cause a sump gasket leak.

How Do You Fix A Leaking Oil Pan Gasket?

Fixing a leaking oil pan gasket is more complex than it sounds. In essence, a mechanic will raise the car on a ramp, drain the oil, remove the sump, change the oil pan gasket, replace the sump, and refill the oil.

As part of this process, the mechanic will check that the meshing surfaces of the oil pan and the block are perfectly level. If one (or both) have become warped, they’ll need to be machined down by an expert with a keen eye for detail.

There’s no point in replacing the gasket until this has been remedied. If you go ahead without repairing the damaged metal, the sump gasket will blow again before you know it.

The gasket itself is a basic piece of thin, shaped metal. The part itself is usually very cheap. It’s common to find one for less than $10.

The expensive bit is the labor charges. You’ll be paying the rate for a couple of hours. If careful machining is required, it could take much longer and be much more expensive.

A labor charge of $160 to $200 for two hours of labor is a reasonable ballpark estimate. Expect to double this if machining is needed.

Finally, the oil. Depending on your last service date, it might be worth paying for an oil service.

Either way, the technician will drop the oil and refill it. You may as well change the filter while you can.

The cost of this depends on the shop. Allow $80 or $90 for a synthetic oil change, including a new filter and other service checks.

The mechanic will set their own rate if you just want the new oil. Budget between $30 and $50 for this instead.

That would bring the expected total cost of repairing an oil gasket leak to somewhere between $200 and $450.

Of course, there are always individual factors at play. Ask your mechanic to keep you in the loop before doing any expensive work.

An oil pan gasket leak isn’t too difficult to repair. As soon as you notice any symptoms, head straight to a mechanic.

It might be a brutal hit to your wallet, but showing your car a little love will save you money in the long run. 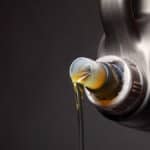