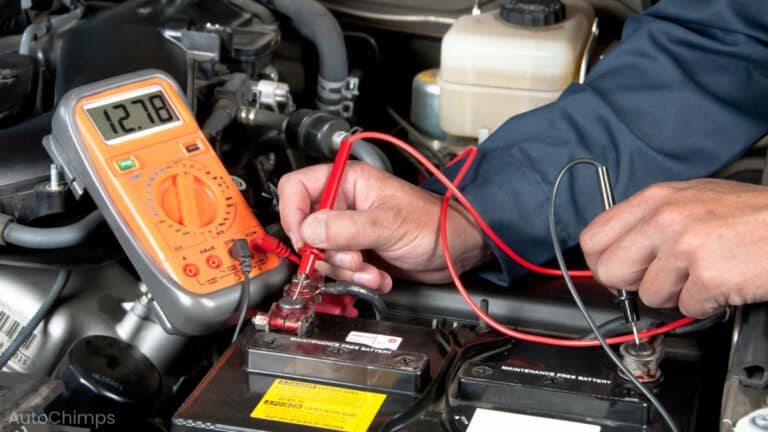 The alternator keeps your car’s battery charged and ensures your vehicle has sufficient power for its various systems.

If you suspect your alternator is faulty, keep reading to learn how to test an alternator.

We will start with the basics so you can have a better understanding of car alternators.

Let’s get started right away by explaining what an alternator is and its function!

What Is An Alternator?

People usually associate the car’s electricity with its battery, which is correct. However, to make the car’s various components that are powered by electricity work, an alternator is also required.

In short, the purpose of an alternator is to generate electricity to recharge the battery and power the electrical components. It converts mechanical energy (from the engine) into electrical energy.

The battery stores energy, allowing you to start the car. If your car didn’t have an alternator, your battery would be drained within a couple of hours as it would be the only source of electricity.

The alternator is connected to the serpentine belt of the car. The belt is powered by the engine, or more specifically, the crankshaft.

As the belt moves, it also moves the rotor, which is located inside the alternator. When the rotor is moving, it produces voltage via the process of electromagnetic induction.

In short, part of the alternator moves when the engine is on, which converts the energy from the moving belt into electrical energy.

Signs Of A Broken Alternator

As always, there are unfortunate exceptions where the alternator does break down. Some signs that an alternator is faulty include the following:

We will take a closer look at each of these symptoms. As stated above, it is very rare for the alternator to fail, but it is a relatively easy and cheap fix if it does happen.

The alternator should work consistently when the engine is on. If for some reason, the alternator does not work properly, it is likely that your car’s lights will start to flicker or become very dim.

When the output of voltage is inconsistent, the headlights will start flickering due to the imbalance of voltage output.

The smell of an electrical fire may also be noticed. If the alternator is faulty, it may overheat due to either an uncontrolled amount of electricity being produced or insufficient cooling.

If you notice the smell of an electrical fire, be sure to take your car to a mechanic as soon as possible. It might produce toxic fumes, so try to avoid breathing it in. There can be many causes of burning rubber.

While this isn’t always the case, different signs might appear. For example, your windows might not retract smoothly, or they could do so far more slowly.

If the car has a difficult time starting, it is probably due to the battery. However, it could also be the consequence of a poorly functioning alternator.

If you are able to start your car, but it keeps stalling, your spark plugs might be the problem. More specifically, your alternator is not providing enough consistent electricity to make the spark plugs work properly.

If your alternator does not work, your battery will die within an hour or two. As the battery is unable to charge, it will soon stop working.

Many people assume that the battery is the culprit when it does not work anymore. While that may be the case, and often is, it is important to ensure that the alternator plays its part.

If it turns out that the battery doesn’t work and it is replaced, only for the new battery to die within a few days or weeks, the problem lies with the alternator and not the battery.

Be sure to test the function of your alternator if the battery drains unusually quickly. This will save you both time and money.

The battery warning light doesn’t only warn you when your battery is low but also warns you when the voltage output from the alternator is abnormal.

For the same reasons that your headlight might flicker, the warning light can do the same. If the warning light turns on when starting the car but goes away during a drive, your battery is probably going bad. On a more positive note, at least your alternator is working!

Switching on different functions in the car, such as the air conditioner or your high beams, might provoke a battery warning light. As those features require electricity, it also requires your alternator to work properly to keep up with the demand.

Sounds in the engine compartment usually seem very unspecific to an untrained ear. It doesn’t help that a faulty alternator may produce multiple sounds, depending on the root of the problem.

The sound of a defective alternator is usually loud whining and high-pitched noise. The noise might also be a grinding or knocking noise due to the bearings of the alternator or the serpentine belt.

How To Test An Alternator

As all the common symptoms have been listed and you now know what an alternator is, it is time to find out how to test that your alternator is working.

Alternators are all about volts. If you have any type of voltmeter or multimeter, you can test the efficacy of your alternator with it. All you have to do is follow these steps:

First, make sure that the battery is in good shape. The voltage of the battery should show a voltage level of 12-13 volts when turned off.

If it shows less than 12, charge your battery until it reaches the desired voltage.

2. Turn On The Engine

With the voltmeter or multimeter attached to the battery terminals, turn on the engine and make a note of the values shown.

If the reading shows a voltage of mid-high 13s to mid-14s, your alternator is in good shape.

If your readings are fine so far, keep the voltmeter on the battery and turn on the AC, headlamps, heated seats, and so on. If you see that the voltage drops below 13 while these various features are on, your alternator is defective.

If it turns out that the voltage is higher or lower than the reference range given in the steps above, your alternator is probably due for a change.

If you suspect that a fault might lie in the pulley, for example, due to a squeaking noise, you can test it very easily.

Wait for the engine to cool down if it is hot. Simply grab the belt that is connected to the alternator (while the engine is off) and pull it downwards. If you hear the same squeaking sound, the alternator probably needs replacing.

The alternator can make strange noises due to loose bolts or misaligned belts. Simply inspect it and look for any loose or damaged parts.

The battery usually takes all the credit for powering the electrical elements of a car. However, the alternator is a critical part of the system.

While it is normal for batteries to go bad, it is very rare for alternators to break. Flickering headlights, the smell of burning rubber, or electrical malfunctions are a few signs that your alternator might be defective.

You should avoid driving if you suspect that there is a problem with your alternator. If you have a voltmeter or multimeter, it should be relatively easy to diagnose the potential problem. 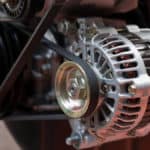