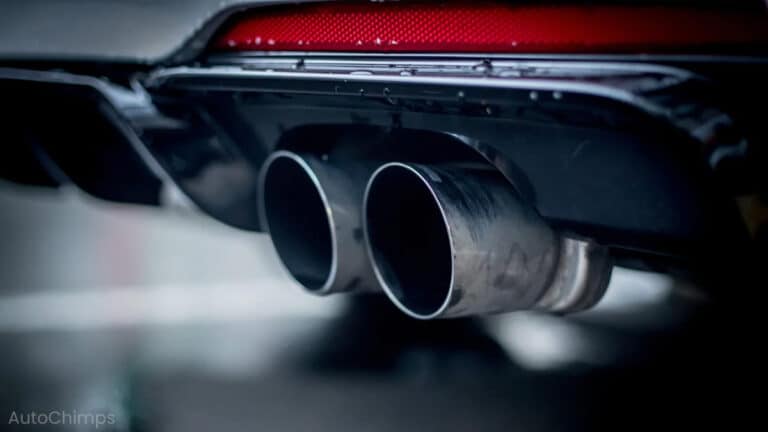 So, you have water coming out of your exhaust pipe? Have you never noticed it before?

In almost every case, there’s no need to worry.

The water dripping out of your tailpipe is condensed water vapor. The (relatively) cold parts of the exhaust bring it back to a liquid state.

This vapor is a natural part of your car’s combustion and emissions processes. On rarer occasions, there could be a more serious underlying fault.

In this guide, I will go through everything you need to know about the water in your exhaust pipe.

Is It Normal For An Exhaust To Drip Water?

It’s perfectly normal for your exhaust to drip water, especially at lower RPMs and in cold temperatures. That said, it could happen at any time.

Looking closely at any vehicle exhaust on the road will reveal that they all spit water droplets. Some more, some less. Older cars are more likely to emit obvious drips.

If you notice any of the following symptoms, it’s not normal. You should go straight to the nearest mechanic you trust.

Why Does Water Come Out Of My Exhaust?

Water is – technically – always coming out of every tailpipe. But it’s usually as vapor, meaning it’s almost invisible.

When you see liquid water dripping from the exhaust, it means this water vapor has cooled and condensed. This happens on the cold(er) surfaces within the metal pipe.

The further toward the tailpipe you go from the engine, the cooler the pipe gets.

The pressure blowing your exhaust gases through the system also forces the water out – whether it’s a vapor or a liquid.

Where Does The Water In The Exhaust Come From?

The water coming from your tailpipe could come from any of the suggestions below. Of them all, the only one of concern is a blown head gasket.

It’s completely normal for an engine to produce water during its combustion process.

Fuel – gasoline or diesel – is a hydrocarbon chain (with other additives too). In the cylinders of your engine, it mixes with air (oxygen). A spark from the spark plug then ignites this mixture.

Water is two hydrogen atoms, with one atom of oxygen covalently bonded to them.

The water then travels past the exhaust valve with everything else. It flows down the pipe where, in the process, it cools. The result is water droplets out of the tailpipe.

If the exhaust is very hot (more on that below), the H2O particles will likely remain a vapor.

All modern road cars have a catalytic converter. This is an emissions-reducing device used to lessen our vehicles’ impact on the environment, health, and welfare.

The ‘cat’, as it’s often referred to, is a honeycomb-like structure in the exhaust system. It’s usually straight after the engine because the hotter it is, the better it works.

Catalytic converters are coated with precious metals and reactive substances. When exhaust pollutants pass them, they convert the majority into relatively harmless chemicals. These include carbon dioxide, nitrogen, and, yes, water.

So, your engine produces water. The catalytic converter also changes some of the other exhaust gases into water. It, too, is forced out of the tailpipe by pressure from the engine.

It’s nothing to worry about. It always happens. In fact, it’s working exactly how it’s supposed to.

A Hot Engine On A Cold Day

As the previous sections explain, water is always in the exhaust system. 99% of the time, it’s absolutely nothing to worry about.

In certain conditions, this water is more likely to condense. This boils down to the difference in temperature between the exhaust gases and the pipe.

For example, water vapor is more likely when you’re performing a cold start. You probably don’t think about it too much. You just turn the key as usual and get on with your day.

However, have you ever noticed the excess white vapor (often mistakenly labeled as ‘smoke’) coming from your tailpipe? You must have seen it coming from other vehicles on the road.

This is water vapor.

It’s more evident because of the more significant temperature change. Your engine is trying to warm up by running rich (more fuel than usual).

As these hot gases pass down the exhaust, they cool quickly. That’s because the atmosphere itself is so cold. The metal pipe hasn’t yet had a chance to warm up at all.

Thus, you’ll see a lot of water vapor. If you take a closer look (not too close!), you’ll notice water droplets in this cloud. And, if your car sits idling for a little while (illegal in most states, by the way), you’re likely to see a lot of water when someone revs the engine.

Leaving your car idling in almost any weather will lead to water build-up. There isn’t enough heat or pressure to push the water through the exhaust as vapor. It gets stuck.

When you press the throttle pedal, it all starts flowing out. Again, nothing to worry about.

Do you live in a particularly humid climate? In that case, leaving your car overnight – or even parked for a few hours – could mean water settles in your exhaust.

This water is contained within the air – and air is everywhere.

As the exhaust temperature reduces, air will make its way into the system, cooling down. The humidity condenses into droplets, forming tiny puddles inside the pipes.

When you start your engine, the pressure forces this water out. As you press the accelerator pedal, expect to find more streaming out the tailpipe.

If you live in a humid area of the world, there’s nothing you can do. (Unless you can control the weather, of course.)

A blown head gasket is a cause for concern. You’ll notice other symptoms alongside the water vapor from your exhaust. These were listed higher up on this page, but here’s a reminder:

The head gasket seals the space between the block and cylinder head. It holds pressure in the cylinders and oil and coolant channels.

If the gasket ‘blows’ (warps, creating a gap), any of these three things could start to mix.

Coolant doesn’t enter the cylinders in huge quantities, fail to combust, and head straight down the exhaust as a liquid. It might feel like that, but that’s not what’s happening.

If that much water were leaking, your engine would either seize or hydrolock very quickly.

No. If you have a blown head gasket, a small amount of coolant is probably leaking. It turns to vapor and then recondenses in the exhaust.

This is something to worry about. Head straight to your local mechanic and expect to pay well over $1,000.

Note: sometimes, the head gasket blows and only affects the oil. The coolant might be acceptable. It still needs immediate attention.

Concluding Thoughts: Do You Need To Get Water Out Of Your Exhaust?

There’s no need to try getting water out of your exhaust. As you rev up your engine, it’ll naturally remove itself.

If your car will be stationary for some time, it’s worth taking it for a drive and storing it in a dry place. If you live in a humid part of the world, consider an inside location with a dehumidifier or good ventilation.

Most of the time, water from your exhaust is nothing to worry about. However, watch out for those warning signs! 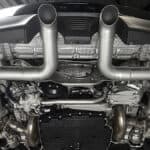 What Is A Straight Pipe Exhaust System And Is It Any Good?