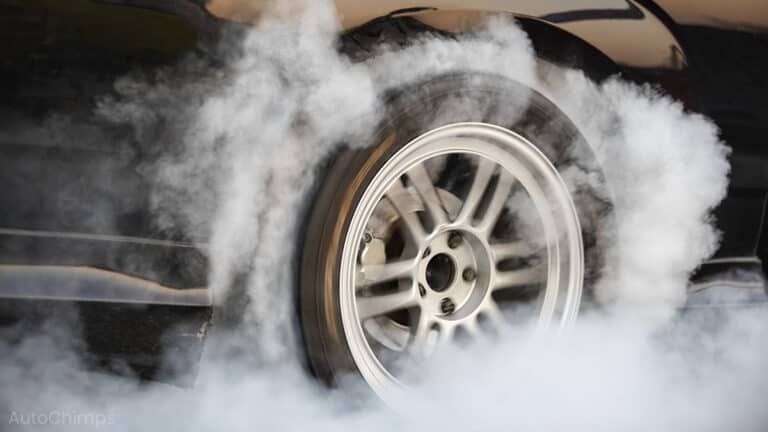 If you’re keen to paint yourself as the next Dom from Fast and Furious, burnouts are certainly a great way to go. They look imposing and are sure to draw the eyes of everyone in the vicinity.

However, although they’re almost seen as a staple of American society, be warned. The many caveats include legalities, safety aspects, financial considerations, and general car care.

How simple it is to spin up your tires also depends on the transmission type. If you drive a manual car, it’s as simple as popping the clutch.

In the manual’s younger brother, though, things are more complicated. In this guide, I will describe how to do a burnout in an automatic car.

What Is A Burnout?

Burnout is the colloquial term for spinning your car’s tires on the ground without letting them find traction. It results in a cacophony of noise and white smoke (although, yes, it’s technically more like water vapor than smoke) and is usually surrounded by the oohs and ahs of onlookers.

As the rubber tires spin over the ground’s surface, they heat up very quickly due to friction. So much so, in fact, that they begin to smoke. That’s what you see and smell.

Burnouts are all about igniting the senses: the squeal and aroma of burning rubber surrounded by a thick cloud of smoke rising mysteriously to wrap around a car. Despite (or maybe because of) their complete lack of common sense and purpose, something appealing about them reaches us deep inside.

There are several well-known terms to describe this action, including peeling off and power braking – burnout, however, is by far the most well-used and recognized.

As mentioned in the introduction, popular movies like the Fast and Furious series have impressed burnouts into the public’s knowledge.

What’s The Point Of A Burnout?

In drag races, drivers often do a quick burnout before taking their positions on the starting line. This serves to quickly warm up the racing tires, increasing their grip for a more effective start while also removing debris from the tread.

In real life, however, a burnout has no practical benefit. They’re for sensory appeal only. From a realistic point of view, they’re utterly meaningless. You’ll simply end up with illegal tires and a damaged or destroyed drivetrain, potentially including the engine and transmission.

However, for many petrolheads and crowdpleasers, the visual appeal of a burnout outweighs all the drawbacks. Perhaps that’s the point. Period.

How To Burn Tires

The critical part of a burnout is throwing enough power into the wheels (whether front or rear) to break them free of traction. Essentially, you have to overpower the tires’ grip, forcing them to spin harmlessly over the ground’s surface.

A burnout is much, much easier to do with a manual transmission. Turn the traction control off (if applicable). With the clutch down and first gear selected, you mash the throttle pedal to build the revs up before popping the clutch pedal.

This immediately throws the power straight to the driven wheels. They’ll instantly spin if there’s enough torque, and off you go.

To keep the car still, lock the handbrake – but only if it’s a front-wheel-drive vehicle!

And that’s all there really is to it for manuals. With automatics, though, it’s a whole other ball game.

Can You Do A Burnout In An Automatic?

Technically, yes – a burnout in an automatic car is absolutely possible. However, it’s much more complicated and much more likely to go very wrong.

The whole point of an automatic transmission is to remove the need for manual control over your gears. It makes life easier, especially for people who do a lot of city driving. However, it’s much more difficult to control your vehicle in exchange, making situations like this more complex. You essentially have to override the car’s programmed and engineered instincts.

Without a clutch, it’s harder to send “instant” power and torque to the wheels. An automatic gearbox and its control module are specifically designed to put the power down gently. Spinning tires are hazardous in most road situations, after all.

Instead, you’ll have to utilize your brakes to help the driven wheels overcome the coefficient of friction with the ground. This in itself is a massive no-no in almost every automotive situation.

Note: in many modern cars, the ECU will prevent you from pushing both the brake and throttle pedals at the same time. It’ll override the throttle plate and reduce the revs to protect itself. There’s probably no way around this, so if your rear-wheel-drive car does it, burnouts probably aren’t possible.

How Do You Do A Burnout In An Automatic (Front Wheel Drive)?

In a front-wheel-drive automatic car, it’s slightly more manageable. The initial and most crucial step is to turn off the traction control. Read through your owner’s manual to find out how to do this. If you can’t, you have pretty much no chance whatsoever.

Next, apply the handbrake or other parking brake. It’ll only work if this parking brake manually locks the rear wheels only. Newer cars with button-based brake locking systems won’t work.

With the rear wheels locked and traction control turned off, put your left foot on the brake and shift into Drive. Ideally, you’ll lock it into first gear, if possible. You’re now ready.

Raise your left foot off the brake pedal and simultaneously slam your right foot onto the throttle. The front wheels will spin up, and you’ll smell burning rubber and smoke within seconds.

How Do You Do A Burnout In An Automatic (Rear Wheel Drive)?

Rear-wheel-drive cars are where it gets tricky and actually rather dangerous.

In the same way as front-wheel drive automatics, you should turn the traction control off and place your left foot on the brake. Don’t engage the parking brake!

When you’re ready, shift into Drive, again locking the transmission into first gear if possible.

Now, slam your right foot down on the throttle. Use your friends as spotters and mirrors to see whether the rear wheels are spinning. If not, very gently ease the pressure on the brake until they start to turn and smoke.

Are There Any Drawbacks To Spinning Tires In An Automatic?

There are so many drawbacks that it’s hard to list them all. Perhaps the following thought is a good place to start.

Fast and Furious isn’t a realistic interpretation of racing or car culture. The films’ physics are closer to Star Wars than Formula 1. Likewise, Need for Speed is a fantastic racing game, but it’s a game – pure and simple. This isn’t an accurate reflection of real-life driving, racing, or car care.

Here are just a few reasons why burning rubber in an automatic is a terrible idea.

Aside from these, consider the genuine fire risk (leaving your car up in smoke but in a different than you probably envisaged) and the fact that burnouts have no actual benefit to your vehicle whatsoever. The case for burnouts is somewhat lacking – despite how cool they look.

In Which Situations Are Burnouts A Good Idea?

If you’re a drag racer, you’ll already be familiar with burnouts and the most effective ways to do them. In drag racing, burnouts are vital. Warmer tires are stickier tires, meaning the car can find traction and launch off the start line more quickly.

Road cars, though, are not designed for this – and neither are their tires. Consider the following aspects if you’re sure you want to try burnouts (perhaps for a movie, Instagram photo, or just for a laugh) in your automatic vehicle.

This guide has considered how to do a burnout in an automatic. If you’re asking for yourself and wondering whether you should give it a go in your road car, the answer is a very simple “don’t!”

Sorry to disappoint anyone, but auto burnouts belong in the visual world – films, video games, and Instagram pictures. Exciting videos and photos aside, the only things burnouts achieve are excessive repair bills and potentially massive fines.

They might look good, but that’s where they should stay. 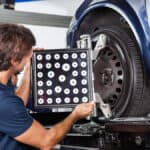 How Long Does A Wheel Alignment Take?