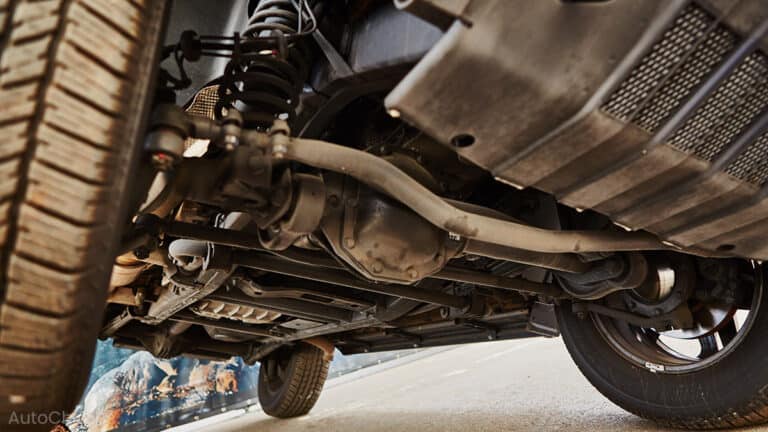 A car’s suspension repair cost can be significant. There are several parts to it, all of which are bound to fail at some point.

Expect your suspension repair cost to come to between $200 and $400, depending on the root cause.

Parts of your suspension that could go wrong include the coil springs, shock absorbers (“shocks” or, technically, “dampers”), wishbone, drop-links, and MacPherson struts.

Don’t put repairs off when your suspension breaks – as it inevitably will at some point. Get it fixed immediately to ensure your car is safe (and comfortable) to drive.

How Does Car Suspension Work?

Vehicle suspension is technically everything that absorbs impact from the road. It protects its occupants and drivetrain from these vibrations and bangs.

It includes the wheels and tires, steering system, torsion bars and differentials, chassis, and the traditional “shocks and springs” components.

The coil spring is the most fundamental part of your car’s suspension. It’s basically the same as any other spring you might be visualizing (except, of course, it’s tough enough to bear a quarter of the weight of a vehicle).

When you go over a bump in the road, the spring compresses, decelerating the velocity with which the car’s body jars. It then releases, returning the car to normal.

Well, in theory. In reality, springs would be bouncing around all over the place. Our roads are never precisely level, so the car would be impossible to control. It would look something like those low riders from Mexico and the southern states.

That’s where dampers come in. Dampers use a hydraulic fluid-and-piston-based system. The harder the impact, the greater the opposing force it applies.

They help absorb significant impacts and return the car to its stable rest position within one spring bounce.

In the front of the car, the shock absorbers are built into the struts (usually “MacPherson struts”).

At the back of your vehicle, they’re attached independently to the suspension arm on each side. The same is true for the rear coil springs.

How Do Leaf Springs Work?

Leaf springs are used on heavy-duty vehicles like trucks, serious off-roaders, and delivery vans. Leaf springs have been used in transportation for many years – long before the invention of the car, even!

They consist of layers of metal sheeting stacked on top of each other in a slight “U” shape.

Leaf springs are much more durable than coil springs. They can handle significant loads but make the vehicle feel pretty stiff. You’ll feel every little jolt the road has to throw at you. They’re also rather large and heavy compared to coil springs and much more challenging to fine-tune.

For these reasons, it’s not usually a good idea to fit passenger cars with leaf springs. It’s better to have a lighter, more compact, and more comfortable suspension system.

What Can Go Wrong With Car Suspension?

When it comes to car suspension, any of the components can fail.

Two of the most common to watch out for are broken springs and leaking shock absorbers.

Coil springs break when they either rust away – very common in damp parts of the world – or suffer an intense, sudden load (like a nasty pothole). Usually, the spring snaps somewhere near the top or bottom. The rest of the spring then expands and remains relatively in place.

You’ll need to get a new spring as soon as possible. A mechanic can’t repair it.

Shock absorbers (“dampers”) are likely to develop leaks over time. That said, they, too, can break due to heavy impacts. Shock absorbers work through a hydraulic piston system. If the fluid leaks, they stop working. They can also seize up.

Many other things can also go wrong, although these are the main things to watch out for.

How Much Does It Cost To Replace A Suspension System?

A car suspension replacement cost is made up of labor and parts.

In this section, you’ll find approximations of how much it costs to fix your suspension, broken down into these categories. Bear in mind that these prices can vary significantly based on your mechanic’s hourly labor rate and the quality of the parts you or they buy.

It’s usually recommended to replace suspension in pairs across the axle. However, for some people, the cost can’t be justified. It’s recommended but not essential.

Rear coil springs will be slightly less, at around $100. Although the parts might be a similar cost, they’re much easier to swap.

Although mechanics work daily on suspension, replacing front coil springs is especially dangerous. When placed on the strut, they’ll compress springs using a compressor. If the spring compressor isn’t used correctly or fails, the huge metal spring can fire off into the technician, causing severe damage.

You need specialist equipment for coil spring replacement! Always take your car to a mechanic.

Shock absorbers cost a little more than coil springs, in general. They’re also often sold in pairs, so if you’re buying your own parts, ensure you purchase the quantity you want.

In most front suspension setups, the shock absorber housing is the MacPherson strut holding the spring and top mount. Therefore, when you buy a front shock absorber, you usually purchase an entire strut.

A quality shock absorber could be $60 to $200, although a figure of around $100 is a reasonable estimate to go on. The mechanic will still need to remove the spring from the old strut to attach it to the new unit. As such, the labor rate will be the same as for replacement coil springs.

Rear shock absorbers should be less expensive. The parts might cost a similar amount, but they’re usually easier to attach since there’s no strut involved.

Wishbone (also known as a suspension arm) replacement is an expensive job because it requires the removal of most of the corners of the car.

The suspension arm itself will only come to around $70, but you can expect to add two or three hours of labor to that. In total, prices could easily reach $300 to $400, depending on your vehicle.

What Are The Symptoms Of Needing A Car Suspension Repair?

If you feel any of the following symptoms while driving, the problem might lie with your suspension. For now, consider “suspension” to be the shocks and springs.

Does your car feel a bit more uncomfortable to sit in? Perhaps you’re feeling the bumps in the road more than you used to. Or maybe you’re noticing some extra bouncing as you go over speedbumps or potholes.

The most likely culprit is either a broken spring or shock absorber. A harsher ride usually means that the spring has snapped or the shock absorber has seized. A bouncier sensation might mean the damper has developed a leak, but the coil spring is still intact.

If you suspect something’s up, take your car to a mechanic. They will put your car up on a ramp to look underneath and identify the problem.

Trust your gut – it’s better to be safe!

Body roll is what happens when you corner hard. You can feel the car leaning towards the outside of the turn.

Some cars suffer terribly with body roll straight off the production line. Tall, high-riding, and heavy cars are the worst culprits.

However, if your car suddenly develops this sensation, it might be due to a broken shock absorber or torsion bar.

When you apply the brakes under normal circumstances, the car will “dive.” “Dive” refers to the front dipping as the rear rises. It’s all to do with physics and momentum.

Note: if you’re interested, when the front of the car rises and the back drops under acceleration, this is “squat”.

All cars experience dive and squat, although most performance manufacturers go to great lengths to minimize it.

If you notice your car diving more than usual when you brake, there may be an issue with the front suspension.

The suspension is partly made up of wheels and tires. Anything that breaks in the suspension arm, shocks, or springs will immediately affect the rubber tread.

Problems with the shocks and springs might cause a “cupping” wear pattern. It’s also known as “feathering” or “scalloping” and is when the tread develops dips as it rotates. You’ll probably also feel vibrations through the steering wheel. A new tire will be in order, as well as a replacement suspension component.

If the wishbone fractures, you’re most likely to see uneven wear along one side of your tire. This will throw the tracking out, meaning you’ll need a wheel alignment and a new tire.

Stand over each rear corner of your car and press down. This is part of general checks and should be done monthly as part of routine maintenance.

The body should lower, rise back up, and settle almost immediately. If it keeps bouncing up and down for a second, you’ve got a problem with the suspension.

It probably indicates a breaking shock absorber. Take a look at it if you can. If it has broken, you’ll notice grease dripping down from it.

The bounce test doesn’t really work at the front of the car since the struts are too rigid. Instead, you’ll only be able to identify problems from driving road tests.

What Else Needs Doing When The Suspension Is Repaired?

After the replacement suspension is fitted, you’ll need to have the wheels aligned. New suspension can alter the tracking. Even a few millimeters of change can be enough to put significant stress on your tires.

The check itself should be free, although some shops might charge. Make sure you understand this before they do it. You should then expect to pay around $100 if it needs adjusting. It’ll be closer to $150 to $200 if you need a four-wheel alignment.

Although it might feel like an unnecessary cost, skipping this step might mean you’re back in a week, red-faced, and needing a new tire or two. Thus, it’s likely to save you money in the long run.

How Much Does Suspension Cost? Conclusion

Suspension is very complicated to work on by yourself at home, even for trained mechanics. It’s quite genuinely dangerous.

Even professionals use the specialist spring compressors available in a shop. It’s not worth risking using suspect homemade “equipment.”

Don’t attempt to work on your suspension yourself. If you don’t put it back on correctly, the entire corner of your car could collapse while driving. Although the labor charges might be a lot, think of your personal safety and the vehicle’s functionality.

In total, you can expect to pay somewhere between $200 and $400 per wheel for car suspension repairs – whatever they may be.

Here’s one final point to leave you with.

Suspension is notoriously frustrating for mechanics to work on. Bolts are always seizing, spring compressors are failing, knuckles are being bloodied, and technicians are cursing the ground on which they stand.

So, the next time you see a mechanic who’s had to replace two shocks and struts, buy them a drink. 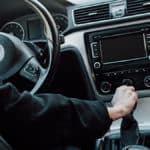