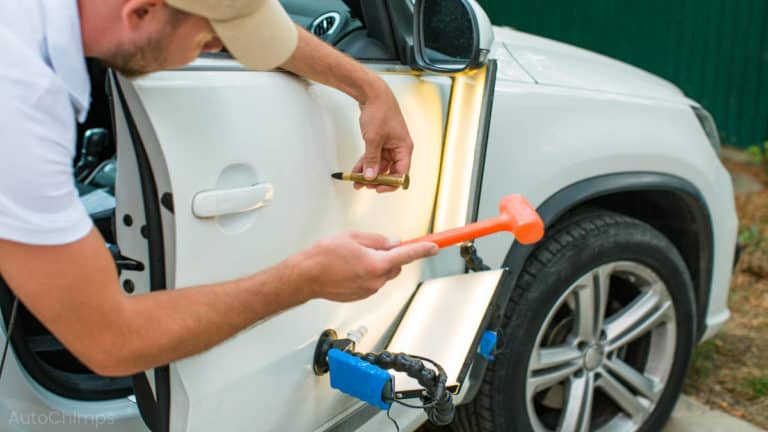 The fact that you’ve found yourself reading this guide suggests you’ve had a rough week.

Whether you backed into a pole, took a turn too sharp, or just weren’t paying attention, returning your car to its pre-dent past will carry a hefty price tag.

How much do car dent repairs cost? There are many factors to consider, including the extent of the body damage, location, and where you have the bodywork done. If it’s a minor dent, expect to spend between $50 and $125.

But let’s be real, the cost goes up significantly if it’s anything more than a door ding.

We will first review each of the above factors in detail to better understand what is involved.

Along the way, you will also learn the exact cost of dent repair.

The Size Of The Dent And The Method Of Repair

The more damage there is, the pricier the repairs will be.

One reason is that larger dents tend to rule out Paintless Dent Removal (PDR).

It’s a newer, low-cost alternative to traditional body shop methods. As its name suggests, PDR work doesn’t require sanding, painting, or drying. This not only makes it faster but cheaper too.

The process involves reshaping the damaged body part back to its original shape by reforming the metal.

As we mentioned earlier, repairing a smaller ding (parking lot damage) will run between $50 to $125.

If it’s less of a ding and more of a DANG, the possibility for PDR goes out the window. In this case, the entire area has to be sanded down, painted, and then set to dry. This means paying a skilled autobody professional to do things the right way with the proper materials (more on that later).

Expect to spend $2,000 or more for a medium-sized dent to restore your car to its former glory.

If PDR isn’t possible and it’s not worth painting, you may have to have the entire panel replaced (and painted).

Depending on the body part, this may or may not be a cheaper alternative. Front and rear bumpers tend to cost less than other panels as they’re usually made of plastic, but they can still run $300-$700.

Tack on getting it painted, and you’re looking as high as a cool $1,000 all said and done – just for a bumper.

The Number Of Dents And Their Location

This one goes hand in hand with the size of the dent. Since how many there are and where they’re located is just as important.

Why? Well, for one, the more panels that are damaged, the more work it will take to repair them. You can basically take the above example and multiply it by how many dents there are and how many body parts are affected.

This is why hail (literal balls of ice falling from the sky) can total out a car, as the average repair runs around $2,500.

Another thing is that fixing a dent on a body line is much harder than fixing one on a flat surface like the side of a door. While anything can be improved, if the damage is too severe, your car will never look the same without replacing the panel (s) entirely.

Additionally, the type of car can also be a factor, as some manufacturers use specialty paints and less-common metals like aluminum or steel.

Where You Have The Body Work Done

As you might have guessed, there’s a big price difference between hiring someone with a ton of experience compared with none.

While you can always find someone willing to do just about anything for $50, so too can you find bargain dent work.

However, due to using cheap paints, below-par equipment, or having no proper location, bottom-tier jobs will likely show upon further inspection. What does bad bodywork look like? A few signs to look for include the following:

What is the difference between cheap bodywork and quality bodywork? Let’s use painting the hood of a regular sedan as an example. The former will likely cost around $300-$500 and the latter $500-$1,000. What do you get for the price increase?

Besides avoiding the above results of bad bodywork, there’s also the number of coats that get sprayed. To save on costs, bargain shops will apply as few coats as possible when painting. Not only that, but they’ll only spray the visible areas of the car.

Should you take your car to a top-tier body shop? It depends on what you’re after.

If the dent occurred when the car was newer, hiring a quality shop may be the only way to restore it back to 100%. If there are already some blemishes, like UV rays, deep scratches, age signs, or other damage, the less costly option may be best.

Now that you know the different factors that influence the price of dent repair. Let’s look at the actual costs a little closer.

How Much Does Car Dent Repair Cost?

You can always find $50-75 ding removal through a quick Google search. Beyond that, shops do what they can to make a little extra. A deep ding? $125.

Larger dents, likely you might see after bumping into a pole or another vehicle, should run between $200-$300 depending on the above factors.

For dents that can’t be repaired with PDR and need to be painted, don’t be surprised to find this number increases by a lot.

Multiply that by the number of dents and how many body parts are affected, and you can easily see how fast things add up.

Stop Hitting Things With Your Car

Wouldn’t that be the easiest way?

Regardless, it happened, and you might as well not dwell on it. Instead, get it handled as soon as possible before things get any worse.

Not only will doing so early help keep the costs down, but it will also prevent rust from developing. 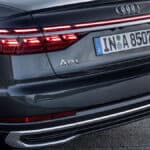 Tail Lights Not Working But Brake Lights Are? Here’s The Fix