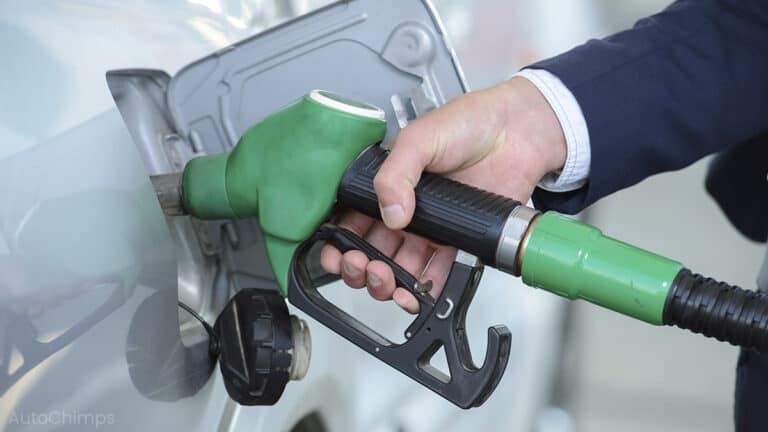 This guide addresses the question, “Can you pump gas with the car on?” This topic is hotly debated worldwide, with strong opinions voiced on both sides of the argument. So, who’s right?

Here’s the bottom line up front.

You should never pump gas with the car switched on, even though the statistical probability of it causing a fire is negligible.

All around the country and the world, gas stations aggressively warn customers to switch their engines off and avoid using their phones (also briefly discussed in this article).

Even though causing a fire is incredibly improbable, it’s best to do what the fuel company tells you.

How Does The Fuel System Work In A Car?

Gas (or diesel) is stored in a tank, usually near the rear of your car. A typical gas tank size would be between 45 and 65 liters. You literally fill this tank up by inserting a hose and nozzle straight into it and pouring gas in, ready to be used by the engine.

Simply put, a fuel pump sends the gasoline down the fuel lines toward the engine. It passes through a fuel filter, removing any fine particulates that could damage the cylinders or contribute to more significant polluting emissions.

Here, it gets pressurized in the fuel injectors before being squirted either directly into the cylinder or into a pre-ignition chamber (intake port), depending on whether it’s a direct or indirect injection. Older engines use carburetors instead.

The fuel pump is electrically driven on all modern cars. When you turn a car’s ignition on or off, you might hear the whine as it starts or stops. Older vehicles use mechanical fuel pumps. These work by creating a vacuum to suck fuel through to the intake port.

What Is A Fuel’s Flashpoint?

It’s important to know what a fuel’s flashpoint is to understand why running a car in a gas station is dangerous.

Gasoline (petrol) and diesel are both flammable liquids. Well, of course, they are – otherwise, your engine wouldn’t work. As a liquid, gas ignites at about 247°C (477°F).

However, as a vapor, gasoline has a “flashpoint” (the temperature at which it ignites) of -43°C (-45°F). Although that makes it great for internal combustion engines, anything from a tiny spark to a naked flame to simply an overly hot surface could ignite fuel droplets in the air.

Thankfully, this is a supremely rare occurrence. You need between 2% and 8% of the atmosphere to contain gasoline for the right conditions for combustion. In most cases, it’s far lower than this.

Diesel has a far higher flashpoint, but it could still be ignited by naked flames or intensely hot surfaces.

Is It Dangerous To Fill Up With Gas With The Car On?

You should never pump gas with the car on, even if it’s only the ignition. While the chance of something going wrong is spectacularly tiny, it’s certainly possible. It might not be declared illegal by the government, but it’s always strongly reinforced by the gas stations themselves.

The safety risk of pumping gas while the car is running comes from static electricity. This is when electrons are stripped from one surface to another, leaving an imbalanced charge. Charges rectify themselves through sparks to return to neutral.

The main mechanical danger of leaving your car running while pumping gas comes from potentially faulty spark plugs igniting the fuel vapors in the air. You can smell it at a gas station, although the concentration is usually far too low to allow combustion.

Spark plugs have a solid ceramic insulating cover to protect against rogue sparks arcing anywhere other than between the gap to ignite air and fuel in the cylinder. However, if this ceramic has broken (which can happen on occasion), it could ignite the fuel vapors in the air around your engine.

The kicker is how fast the fire could get out of control. If the car catches fire, the gas in the tank could combust, igniting the fuel in the gas nozzle and hose. It could then spread to the gas station’s vast fuel reserves (they can easily store 10,000 gallons per pump).

That would be a gargantuan blaze, potentially putting lives at risk, shutting down roads, and causing massive costs to the local authorities in terms of the fire department.

Since you ignored the emphatic warnings and advice from the gas company, they’ll likely blame you, with a monumental lawsuit coming your way.

Can You Pump Gas With The Car Running?

You should never pump gas while the car’s running.

However, it is technically possible and carries a minimal risk of anything going wrong. Despite this, nobody’s ever struggled to turn off their engine (although if you are, you certainly shouldn’t be filling up with gas!), and it takes almost no effort whatsoever.

The act of pouring fuel into the gas tank while the engine’s on won’t impact the car’s engine performance or health. It’s not about that. It’s about the potentially catastrophic fire that could burn down the gas station and anything in its vicinity.

It’s somewhat ironic that you must have your engine switched on to drive in and out of a gas station. There’s no law against this, and nobody expects you to stop a hundred yards before a pump, turn off the engine, and manually push the car toward it.

There is some lack of logic in this rule – but it’s still a rule. It’s about minimizing risk, not eliminating it.

One time, the conditions might be just right for a fire, but you might have saved yourself by simply switching the car off.

In certain hot countries – Abu Dhabi, for example – car owners are well-known for leaving their vehicles running while filling up with gas (despite this being illegal).

They want to keep the air conditioning blasting into the cabin to preserve their passengers’ comfort. However, it could always go wrong!

What Else Could Cause A Fire In A Gas Station?

In reality, several things are much more likely to cause gas station fires.

In summary, just be careful, and whatever you do, don’t smoke!

It’s astounding how many people smoke or use lighters in gas stations. Cigarettes are by far the biggest cause of fires.

Someone doesn’t have to be standing right next to the fuel. They could be a few meters away, but hot ash could still be carried in the wind to ignite it.

Don’t be that person. If you need a smoke, just wait a couple of minutes.

Most car components are made of metal. This is a solid material, but it can have the potential to get ridiculously hot.

One of the biggest culprits is the catalytic converter. The hot exhaust gases all pass through this for the removal of most pollutants. In the process, it gets very hot.

If you have just been driving fast for a long time, this heat has the capability of igniting any nearby gas vapors at the right concentration.

Just like spark plugs, static electricity can build up anywhere – including in you. This is particularly the case in cold, dry weather with certain items of clothing.

Don’t open or close your doors while filling up with gas and avoid touching anything metal until the nozzle clicks off and you’ve replaced the gas cap. Doing so could cause a spark.

This is why you’re also discouraged from using battery-powered devices like cell phones at gas stations. If sparks from a malfunctioning battery ignite the fuel in the air, it might cause a fire.

Although using your cell phone is banned in gas stations across the world, there are currently no recorded cases of one ever starting a fire under these conditions. Still, rules are rules.

Don’t worry too much about spontaneous combustion, although some cars are well known for randomly catching fire due to poor wiring or other overheating issues.

If you switch your car off, this is less likely to happen – even if it’s highly improbable in the first case.

Why Else Is It Bad To Leave The Car Running While Pumping Gas?

While it’s extremely unlikely to cause a fire, as established, there are many other reasons you shouldn’t leave a car running while parked in a gas station.

Kids or pets could – wittingly or unwittingly – knock the car into gear. This may injure them or others, damage property, and could pull the hose out from the pump, leading to a fuel leak on the forecourt.

Pollutants. Yes, in the grand scheme of things, the amount of pollution someone might breathe in from an idling car in a gas station is relatively low. Still, it’s illegal to leave your car idling without reason.

Car thieves have ample opportunity to steal your car. Maybe not while you’re standing with the nozzle, but as you head inside to pay (or focus on the pay-at-the-pump machine), someone could just walk up, jump in, and drive off.

Insurance might not cover you, too, since you left the keys in it.

In Conclusion, Is It Bad To Pump Gas With The Car On?

Since gas stations always tell you to turn your car off, you should always turn your car off. While it might not technically cause a fire, there’s always a slim chance of something going wrong. It’s as simple as that.

Think of it this way. Yes, well done. You’re absolutely right in saying that the probability of your car igniting gas vapors is virtually zero.

Give yourself a pat on the back and a shiny sticker. However, what if you’re that one-in-a-million case where it goes wrong? That’s a letter of deep regret to the gas station and a possible costly time in court.

Besides, turning the key to the OFF position is hardly a considerable effort. Plus, there are several other reasons why leaving your car running in a gas station is a terrible idea.

In conclusion? Turn your car off while pumping gas! Why wouldn’t you? 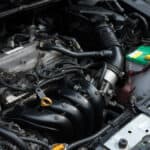 Why Is My Car Engine Sputtering? Here’s The Fix