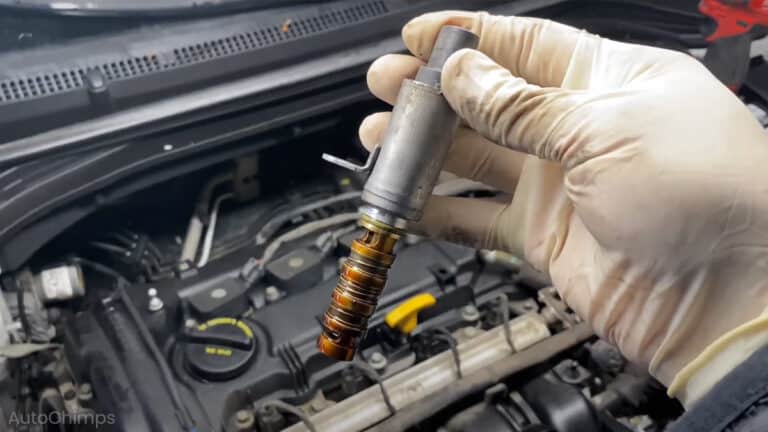 While this can make the life of an old-school mechanic frustrating, the benefits far outweigh the drawbacks. New technologies mean today’s engines are far superior to decades past in power output, reliability, carbon emissions, and fuel economy.

In this guide, I will consider variable valve timing (usually shortened to VVT) and the associated OCV (oil control valve) so you can get a clear understanding of the symptoms and replacement cost.

However, many other systems have contributed to this field, such as exhaust gas recirculation (EGR) and fuel injection systems.

The oil control valve directly affects valve timing. In turn, this alters how the engine performs.

If you see or feel any symptoms of a bad oil control valve (also known as a VVT solenoid), you should take your car to a local mechanic to get a replacement cost quote. It may require some detailed diagnosis.

Before exploring variable valve timing and how the oil control valve regulates it, it’s crucial to grasp how an engine works. See the video above for a straightforward overview.

A simple engine contains four cylinders and is known as an “inline” or “straight” model. Specifically, this type is generally called an Inline-4 or I4.

Within each cylinder is a piston. In an Inline-4 engine, the pistons travel up and down (“reciprocally”) within the cylinders in pairs, although each is doing something different.

The pistons go through four phases or strokes: intake, compression, power (or “combustion”), and exhaust. Colloquially, these are known as suck, squeeze, bang, and blow.

During the intake stroke, a valve (again, using the simplest engine model available) opens to allow an air/fuel mixture into the cylinder. The piston is at or near the lowest point in its cycle, known as Bottom Dead Centre – BDC.

The valve then closes as the piston rises, compressing the mixture into a tiny space between the piston head and the cylinder top. The spark plug then fires, combusting the combined air and fuel and forcefully driving the piston downwards.

Now that the piston is back at BDC, the burnt gases must go somewhere. The exhaust valve thus opens, expelling them as the piston rises back up.

The pistons are attached to the crankshaft by conrods (short for “connecting rods”). These convert the reciprocal energy into rotational force, which powers the wheels and drives pulleys for running the engine’s other processes.

The camshaft pulley is one of the most important things connected to the crankshaft. These are connected by a timing belt or chain, which you may have come across before. The camshaft rotates, and its lobes press against the valves, opening and closing them.

What Is Variable Valve Timing (VVT)?

The valves must both open and close at the right time to correspond with the sequence. For example, if the exhaust valve were to open during the compression stroke, the unburned air/fuel mixture would just disappear straight down the exhaust. There wouldn’t be anything for the spark plug to ignite, and thus the cylinder would misfire.

The tappets on the camshaft make this situation very unlikely. However, it’s always possible for the cam or valves to break or come loose with time.

Variable Valve Timing means the following can be adjusted:

Each of these can optimize an individual stroke, if necessary, for power, fuel economy, or environmental emissions, depending on the road situation.

There are many ways variable valve timing can be designed, constructed, and implemented. It comes in many different names. General Motors, Chrysler, Volkswagen, Toyota, and Suzuki (including their off-shoot companies) are some of the most prominent players in using the specific term “VVT” in their models. Other examples include Honda’s “VTEC” and Peugeot, Citroen, and BMW’s “VTi.”

What Is An Oil Control Valve/VVT Solenoid?

An oil control valve, also known as an OCV or a VVT solenoid, is part of the variable valve timing system. It plugs into the car’s main wiring harness and should be found somewhere in the upper part of the engine. It’s helpful to use the internet or a vehicle-specific guide to find it on your particular car.

The oil control valve is driven by oil pressure and controls the VVT system. It either advances or retards (makes earlier or later, respectively) the camshaft timing. Advanced timing is better at low revs, whereas retarded timing gives the engine more power at higher RPMs.

In the photos or videos of the OCV, you’ll notice that one side has three slits (known as ports), and the other has two. The oil pressure forces itself into the central port on the side with three, with the electronically controlled solenoid preventing it from going any further.

The solenoid then shifts position depending on signals from the ECU. By moving, it directs the flow of oil through any of the four other channels. The two remaining ports on the side with three are simply drains. The other two lead it to the VVT system.

The VVT oil control valve is usually designed to kick in when the engine is under a heavy load. That is, it has to work harder to accomplish its usual tasks. Examples of this could include hard acceleration, driving uphill, towing a trailer, or carrying significant extra weight.

If the oil control valve stops working, your car won’t operate efficiently. You’ll notice some, if not all, of the symptoms listed here.

The engine stops working correctly because the valves always open at the same point. They’re technically optimized for a specific rev range due to the malfunctioning VVT solenoid and thus struggle the rest of the time.

If the solenoid in the oil control valve stops working, the ECU will immediately recognize this and illuminate the Check Engine warning light on your dashboard.

When you or a mechanic attaches an OBD II code reader, any of the following codes could come up:

These codes are stored and will need to be cleared once the fault has been identified and repaired.

A faulty oil control valve causes a rough idle because the solenoid has failed. It thus either alters the valve timing too much when it shouldn’t or not at all when it should.

The OCV will be active during idle, optimizing the engine for high revs. Since you’re at the lowest possible revs, this is counterintuitive and leads to the engine struggling or stalling.

Whatever the exact details, the camshaft timing won’t be optimal, creating a rough idle and/or inconsistent revving pattern.

Since the VVT system optimizes the camshaft timing, performance will suffer. You’ll particularly notice this under high-stress situations like hard acceleration or uphill driving. The car might also struggle to maintain high speeds.

If the camshaft OCV stops working, the engine simply can’t put out as much power as usual.

One of the many benefits that VVT provides is the improved gas mileage. The engine can be constantly adjusted to ensure minimum fuel is used. Your tank, therefore, lasts longer.

When the VVT oil control valve stops working, the solenoid is likely stuck open. The valve timing thus can’t be adjusted to improve your fuel economy.

If you drive a newer car, it’ll most likely display your average MPG on the dashboard in front of you. If not, you might simply notice that you’re heading to the gas station more often than you used to. Both indicate low fuel economy, and a bad OCV solenoid may well be the underlying problem.

Why Does An Oil Control Valve (OCV) Stop Working?

More often than not, an OCV fails due to poor quality or old oil. The oil produces sludge, a thick, gooey substance that blocks up channels and impedes your engine. It could also develop an electrical fault.

If your oil control valve stops working, you can first try cleaning it. This may solve the problem. If not, you’ll need a replacement part.

The part itself doesn’t usually cost much more than $50 for standard American cars. Luxury brands could be more. Take your vehicle to a mechanic. You’ll probably pay an hour or two in labor rates, coming to somewhere between $100 and $150 (or thereabouts). Each shop charges its own rates, so don’t be afraid to get a few different quotes.

The oil control valve/VVT solenoid is located somewhere near the top of your engine block. Every manufacturer produces its engines differently, and the OCV could be almost anywhere. Use a vehicle-specific guide to find it (or have a quick search on the internet).

The best way to prevent your OCV from failing is to regularly change the oil and filter and use high-quality motor oils (fully synthetic).

Can You Drive With A Bad Oil Control Valve?

Technically, yes, you can drive with a bad oil control valve. However, it’ll do more and more damage to your engine. Eventually, you’ll end up with substantially more damage, potentially including:

In summary? Yes, you can drive with a faulty oil control solenoid, but if you are, you should only be driving straight to the shop where you’ll get it fixed. 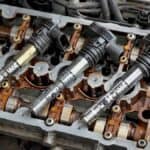 Symptoms Of A Bad Ignition Coil And Replacement Cost