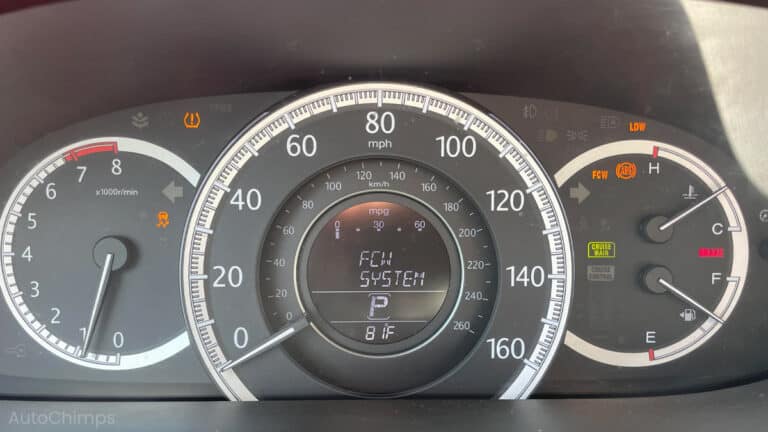 “FCW System Failed” refers to a fault with the system warning you of a looming crash. When this system stops working, it won’t alert you to the danger.

The FCW is separate from any Advanced Driver-Assistance Systems (ADAS) that might control brakes or steering. It’s just a warning.

So, is it serious when the FCW system fails?

Not directly. It’s usually easy to fix. That said, it might mean you have a more serious underlying ECU problem.

What Is An FCW System?

The Frontal Collision Warning (FCW) system warns drivers of dangerous situations ahead. It’ll alert you when your speed is disproportionately fast compared to a slower or stationary object in front of you.

Each manufacturer designs its system differently. However, in general, most use a combination of at least two of the following:

The FCW system can be hugely beneficial if you’re a distracted driver.

Depending on the system and specification, the precise warning varies. Most cars will give you an audible alert (often a beep) and/or vibrate the steering wheel.

When the FCW system informs you of imminent danger, you must look up, assess the situation, and react appropriately.

The FCW system is a driver assist, not an all-seeing deity. It can get things wrong. Don’t slam the brakes on for no reason – this could lead to an accident behind you.

The FCW system won’t work in several situations, including:

FCW System Failure: What Should I Do?

If you read the “FCW System Failed” message on your car’s display, keep an eye on the road ahead.

Your car shouldn’t automatically apply the brakes, even if it has ADAS programs. The system turns itself off to avoid creating accidents.

Keep driving until you come to a safe place to stop, such as a rest stop, parking lot, or lay-by. Then,

The FCW system is only a “warning.” It doesn’t control the brakes for you (although it might be linked to such a program).

An FCW system failure only means you won’t be warned of a crash. Your car is safe to drive as usual. Keep an extra wary lookout for anything stopped ahead of you (but you should always be doing that, anyway).

Which Part Of An FCW System Fails?

The error message “FCW System Failed” means that the Frontal Collision Warning system isn’t working. That much is clear.

The FCW system could fail with:

ECU or sensor failure is too complicated to work on at home. Take your car to a specialized electrical mechanic or a dealership.

Driving Beyond The System’s Limits

Thankfully, this is the most common reason for the “FCW System Failed” warning.

When you’re driving in particular conditions (whether it’s the road, other cars, or weather/environmental factors), the FCW can’t work. The sensors and cameras can’t scan the road ahead.

Here are a few examples of this.

Other factors could also be in play. You’ll often find it best to pull over at the next safe place and turn your vehicle off. Clean your car off (if applicable) and restart it.

The “FCW System Failed” message will often not reappear. You’ve done it. Give yourself a resounding pat on the back, and get on with your day.

If the error message persists, there’s a deeper problem.

If the FCW system fails, there could be a problem with a sensor, laser, or camera.

As mentioned, there isn’t a standard setup that all manufacturers use – not yet, at least. You’ll need to consult your owner’s manual to find the various locations.

However, this is the Frontal Collision Warning system. All the sensors, therefore, will be somewhere near the front.

It should be as simple as replacing the faulty sensor with a new one.

This failure could stem from several places. For instance, the original part might be low-quality or from an affected batch from the manufacturer’s supplier. The sensor could have been physically damaged in a crash or by water intrusion. It might have simply suffered from general wear and tear.

Either way, you need a new one.

Having said all that, it could be as simple as recalibrating a sensor. After a new windshield or sensor component, for example, you should get this done.

If all the sensors are in working order, the fault might lie with the wiring.

All sorts of things could go wrong here. Here are a few examples:

You’ll need a full electrical diagnosis from a professional if you find sensors aren’t the problem.

A problem in the ECU is the most challenging to diagnose. But if wiring or sensors aren’t the problems, it’s the only option left.

Control modules can get damaged in many ways. One of the most common is water or humidity ingression and physical accidents. There could also be a manufacturer glitch or poorly installed hardware, among many other things.

You could try doing a reset. This often involves removing a fuse or disconnecting a battery for a specific period (around 15 to 30 minutes). The control modules then revert to their standard settings. Check your owner’s manual before doing this to avoid extra damage!

In some instances, this fixes glitches and temporary, less severe issues.

Don’t even think about replacing or reprogramming your ECU yourself. The precise aspects involved are fiddly, and it’s almost impossible to do at home.

How To Fix A Failed FCW System

In summary of this, then, the best order to try fixing the FCW system is:

In the end, an FCW system failure isn’t the end of the world. You can drive without it, no problem. But it’s best to get it fixed because it might mean there’s a more serious internal fault.

If your car is still covered by its warranty, great! This should all be covered for free.

Catch it early? Catch it cheap(er). 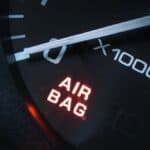 Airbag Light On Or Flashing? Here’s Why