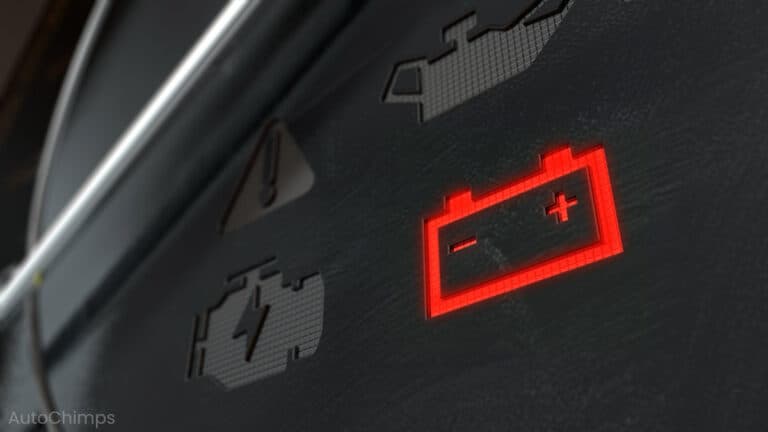 If you’re driving along and the car battery warning light flashes up, there’s no need to panic.

This guide will explain what you should do and the mechanics of what could be going wrong.

Every modern car – including yours – will have a 12-volt battery and circuit, charged and powered by an alternator. Each time you start your engine, all the dashboard lights should illuminate and disappear, including the car battery warning light.

When a car battery warning light pops up on your dashboard while driving, it means the electrical systems in your vehicle aren’t receiving enough power.

This guide will explain how a car’s battery and electrical system work and go through some potential causes of the warning light coming on while driving.

What Is A Car Battery?

Car batteries work in precisely the same way as other commercially available batteries. Through a chemical reaction, they supply electrical power to a circuit.

A car battery’s primary responsibility is to drive the starter motor, which gets your engine started when you turn the key in the vehicle ignition. Without it, we’d all still be hand-cranking our heavy engines!

Once the engine is powering itself, the alternator takes charge of running most electrical components in your vehicle, with some battery assistance. This includes lights, spark plugs, radio, heater, windshield wipers, etc.

When you’re driving, the alternator is responsible for recharging. For this reason, a running car’s battery has a higher output voltage than a stationary one. The auxiliary drive belt powers the alternator.

It takes about 30 minutes of freeway driving to recharge a battery completely. In a city, it could take around an hour. That’s why making many short journeys is terrible for your car’s battery (and other systems, too).

What’s The Voltage Of A Car Battery?

All standard cars come with 12-volt batteries and circuits, including the component circuitry in electric vehicles. Older models might come with a 6-volt version.

With the engine off, connecting a voltmeter across the terminals of a fully charged battery should give you a reading of 12.6V (although 12.5V is low but acceptable). When the engine runs, the output should be about 14V (between 13.5V and 14.5V).

The battery comprises six 2.1-volt cells, which the eagle-eyed amongst you will note adds up to 12.6 Volts rather than 12. The “12-volt” class is a nominal, general term for this kind of lead-acid battery, stemming from the days of 6-volt batteries.

The older 6-volt batteries had three 2.1-volt cells, producing 6.3 Volts. This figure was then rounded down to 6.

The newer, more powerful batteries had six of the same cells, making them twice as powerful. Thus, we call them 12-volt batteries, even though it’s tempting to round their output up to 13 Volts.

Why Can I See A Battery Light While Driving?

If the battery light comes on while driving, the car’s ECU (basically, its brain) has registered that the electrical system isn’t putting out enough volts to run the vehicle effectively.

Sometimes, your battery or alternator may go through a temporary blip where it momentarily throws out a less-than-expected voltage. This could be an early sign of a developing problem.

If you have a persistent battery light on while driving, there’s either a problem with the battery, the alternator, or a connection somewhere.

Symptoms Of A Struggling Electrical System

If the battery light comes on, you might also notice some of the following symptoms:

Of course, these are all fairly significant issues and could be dangerous in the wrong circumstances. It’s essential to find and fix the problem as soon as possible.

What Causes The Battery Light To Come On While Driving?

If the battery light comes on while driving, remember: it’s not necessarily a problem with the battery!

The warning light means the electrical system isn’t getting enough power. This could stem from a few different places – the battery, the alternator, or the wiring connecting the parts and components.

You’ll know a battery can’t hold a charge if it struggles (or fails) to start or crank when you turn the key. The alternator might be working fine, but if it’s trying to recharge a faulty battery, the ECU will realize and activate the light.

Of course, batteries are perishable parts. They won’t run forever, just like how your smartphone’s battery life is shorter and shorter with every charge.

You can expect a good quality battery to last between three and five years, but rarely any longer. When a battery stops working properly, it’s usually down to one of the following reasons:

These would all inhibit the charging and discharging processes, causing the dashboard light to come on.

Use a voltmeter or battery tester to check its health, both with the engine off and running. You should see 12.6 Volts and about 13.8 to 14.2 Volts, respectively – any less could mean a faulty battery.

Simply switch it out for a new one. It shouldn’t be too expensive.

An alternator is an electromagnetic generator driven by the auxiliary drive belt (the belt you can see on the side of your engine under the hood). It generates alternating current (AC) and passes through the rectifier, changing it to DC (direct current) before passing through the voltage regulator.

The regulator should ensure that the alternator always delivers between 13.5 and 14.5 Volts to the car’s circuit. It simply switches its output off whenever it’s too high.

If the alternator isn’t working correctly, it won’t put out enough Volts and, therefore, can’t fully power components or recharge the battery.

Should the alternator stop working entirely, the electrical system will draw all its power from the battery, giving you a maximum of 30 minutes before it completely discharges and the engine stalls.

These situations will cause the battery light to come on while driving.

You can test an alternator by using a multipurpose battery tester. These are widely available and should come with options to check the health of the battery, the alternator, and the starter motor.

If the test shows a poor alternator output, you’ll need a replacement part. Experienced mechanics may be able to take it apart and swap out the faulty component, but for you, as a customer, this is generally the pricier option.

Unless a bad wiring or connection problem is immediately apparent, you’ll probably need some expert diagnosis work from an automotive electrician to find it.

A car’s 12V circuit runs from the battery/alternator through wires to the various components. These devices are then connected to the vehicle’s chassis (“grounded”) to complete the circuit, returning the electrons to the battery.

If the battery’s terminals – the two knobs or “posts” sticking up, labeled “positive” and “negative” – are damaged or corroded, the voltage would also be impeded. Try reconnecting them to the wires and greasing the terminals with an appropriate grease.

The circuit can’t transfer sufficient electrical potential if there’s a problem with either the wiring or the grounds. As a result, you’ll get a warning light.

Of course, there are thousands of grounds and connections throughout a vehicle. As a result, specialist diagnosis services might be needed.

What Should I Do If The Battery Warning Light Comes On While Driving?

With the battery warning light on, aim to get somewhere safe nearby where repair work can be carried out, such as a nearby auto shop or your home’s driveway. Get off the road as soon as reasonably possible.

Once there, try restarting your engine to see if the light is still there. If so, it might be worth calling out your breakdown assistance company.

In the meantime, try not to switch the engine off until you reach your destination. If your car has a stop/start system, the ECU should automatically disable it – but it’s worth checking.

For the same reason, do your best to keep the engine revs relatively high, especially if you can feel the car struggling at idle. If you’re driving a vehicle with an automatic transmission, select a slightly lower gear than usual and try to avoid stopping. In manual cars, simply keep your foot on the throttle pedal when you’re stopped.

Try to minimize the load on the electrical system by turning off unnecessary appliances like the radio, heater fans, heated seats, heated windshield, and headlights (not if it’s dark, of course). If your engine performance has been affected, keep in the slow lane. If necessary, you should put your hazard warning lights on.

Sometimes, you’ll find that the battery warning light has disappeared when you next start your car. It might not reappear again for some time, which could also represent a developing problem.

When the light stays on for multiple trips or comes on halfway through your journey on successive days, you’re more likely to have a serious electrical issue.

You may be able to find the problem yourself with some simple diagnostic tools like battery testers or bog-standard voltmeters. However, if not, be prepared to take the car to a specialist automotive electrician.

The diagnosis might be pretty costly ($100 to $500, depending on the complexity). A new alternator might come to around $400, including labor. In contrast, you can expect to pay up to a little more than $100 for a new battery.

If the battery warning light comes on, fix it as soon as possible. Don’t try to ignore it – keep the road safe for you and everyone else. 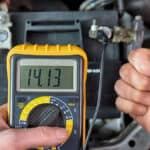 How Long Does It Take To Charge A Car Battery While Driving?