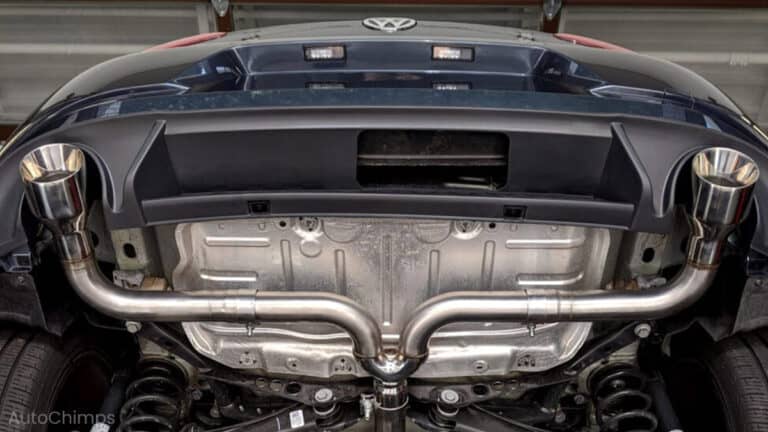 Muffler deletes are thrown around on the internet as a viable performance-enhancing modification. But are they really?

Even though you can only use them for non-road applications, muffler deletes are pretty pricey. Expect to pay well over $300 (including labor).

Is a muffler delete worth it for a vehicle you’ll rarely use? You’ll make up your own mind, of course.

But it’s probably not.

I’ll now explain what a muffler delete is.

What Is A Muffler Delete?

Your exhaust system is made up of several different pipes and components. The last of these is the tailpipe, where the gases are pushed out into the atmosphere.

Just before the tailpipe is the muffler – that cuboid-shaped metal box. The muffler’s job is to lower the noise levels put out by the vehicle. It does this by channeling the gases and vibrations through chambers and walls.

A muffler delete is, quite simply, removing the muffler. Depending on the exhaust system, it might be cut off or unclamped and removed. It then needs replacing with an aftermarket component that either welds to or replaces the tailpipe.

Don’t be surprised if the Check Engine light comes on and you can’t get it to turn off. This change in your exhaust often confuses the ECM, especially on newer vehicles. This might make police stops and vehicle inspections a little awkward.

The only pro for muffler deletes is a considerably more throaty, aggressive sound. This much is true. You’ll certainly be making much more noise.

Some claim increased performance, but in real-life terms, that’s a myth. Scroll toward the end of this page to read more.

One last point: don’t get mixed up with a straight pipe exhaust system. These replace the catalytic converter (“cat”) and the muffler.

Is A Muffler Delete Illegal?

On every road in every state.

To be honest, that’s where this page should end – at least for all roadgoing cars.

Muffler deletes are illegal and prohibited in every state in the US. This is for noise pollution rather than anything to do with emissions.

Realistically, the police are unlikely to pull you over for a muffler delete. Unless you have a very high-riding or open-backed vehicle, you can usually only see this area from underneath (such as a ramp or inspection pit).

However! – they certainly could pull your car over for making excessive noise. You’re likely to get a ticket and be told to get your exhaust checked and fixed.

If the cop in question is familiar with car mechanics and decides to inspect it themselves, you’re in trouble. They’re likely to write you an additional ticket on the spot.

There are only a couple of cases where you might get away with a muffler delete. These are any off-road applications, such as racecars or farm vehicles.

You still have to meet noise laws, though! And racing series will come with their own restrictions too.

So, unless you’re racing or otherwise not driving on the road (at all), you shouldn’t install a muffler delete. Sorry. That’s the brutal truth of it!

Will A Muffler Delete Pass An Emissions Or Safety Test?

A muffler delete doesn’t technically alter the emissions themselves. However, part of the test involves a visual inspection of your exhaust system.

The technician will immediately notice that you don’t have a muffler. This would be reported and classed as a failure.

In many cases, especially with newer cars, a muffler delete confuses the ECM. This could lead to a Check Engine light, which in turn causes any inspection to fail.

What’s Involved In A Muffler Delete?

If you decide to go ahead with a muffler delete on your racecar or 4×4, here’s what you should consider.

A muffler delete is an aftermarket component. As mentioned, it’s essentially the same as your current exhaust but without the muffler.

The first thing you’ll need is the muffler delete itself. Do a quick internet search for muffler delete kits for your vehicle. Include the make, model, specification, engine, and trim.

The kit might also include rubber mounts, bearings, and clamps. These will come in handy.

You could, alternatively, order these parts through the mechanic who will complete the work for you. This is usually the cheapest option since they’ll get trade discounts.

The mechanic will then remove the muffler and tailpipe. In some systems, this is as easy as releasing a clamp and pulling the component away from the mounts. Sometimes, it’ll need to be cut.

After this, the new one is connected up and fitted. And then you drive away. Simple. Well, if it were legal.

What Is The Cost Of A Muffler Delete?

How much does it cost for a muffler delete? Low-quality models can be quite cheap, but the good ones can hit your wallet hard.

The muffler delete itself – assuming you want a good, well-engineered component – will cost you upwards of $200. Many approach the $400 or $500 mark.

Remember that if a mechanic gets these parts for you, they might cost less.

On top of this, you’ll need to add labor charges. In most cases, this is a reasonably simple job. Don’t expect to be paying more than an hour’s labor. This would come to between $80 and $100.

Note: you might find cheaper aftermarket muffler deletes, but they won’t work so well and might be difficult to install.

One other thing. If you’re breaking the law by installing a muffler delete on your road car, you might struggle to find a mechanic willing to fit it for you. They don’t want to get in trouble!

Does A Muffler Delete Improve Performance?

The theory here comes from improving the airflow with fewer restrictions and impedances. This means more exhaust gases leave the combustion chamber. In turn, there’s more space for a greater volume of oxygen to enter it in the next stroke.

They also decrease back pressure, a fundamental (theoretical!) part of improving airflow.

While the overall gas flow improvement is undeniable, how much of an impact it makes is, well, debatable. The muffler delete manufacturers often come up with magical figures like “10 hp gain!” No. That’s not how it works, unfortunately.

In reality, you’re unlikely to feel any noticeable difference whatsoever. There might be an exception if you already have a large and powerful engine. You might feel a tiny bit more pull.

On newer cars, it’s actually more likely to inhibit horsepower. The ECM adjusts so many variables so many times per second to get the optimal burn. Messing with this system – even slightly – can alter its impact.

When you perform a muffler delete, you change the airflow and back pressure. The ECU is therefore working with and compensating for nonexistent factors, impacting performance. You also stop the pipes themselves from working so effectively.

Manufacturers design cars with mufflers. This is all carefully engineered and accounted for. Changing it usually has a negative effect.

In reality, you might feel like you’re going faster because your car’s making more noise. But you aren’t.

Alternatives For Improving The Sound Of Your Car

A good alternative for improving your exhaust’s sound is an exhaust tip. These are legal, but you must adhere to noise regulations. They’re only around $50, too!

Cat-back performance exhausts are also legal in most states, although you should check local regulations. “Cat-back” refers to an exhaust system attached to the catalytic converter. The emissions system remains in place.

A little extra volume is fine if the performance exhaust also has a functioning muffler. However, local law enforcement officers might penalize you if you make excessive noise.

Restoring your engine to good health also helps improve the sound it makes. Get an oil change, pour in fuel additives, and even consider an engine rebuild (if you have a few thousand dollars going spare).

Although it doesn’t seem like much, these are very effective ways to care for your car. You get a slight audible improvement at the same time. Think of it as a free added extra.

While a muffler delete might not be break-the-bank expensive, it’s illegal. As such, you won’t be doing it on any road car.

You could choose to install one on your farm vehicle or racecar, but, in the end, it won’t make much difference. There are far more worthwhile modifications you should spend your time and money on.

Everyone wants their car to sound cool. In the end, this is real life, not Fast and Furious. Instead of propelling down a ten-second quarter mile, a muffler delete will land you nothing more than an expensive installation bill and an awkward chat with the next cop you see. 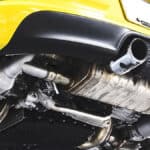 How To Clean A Catalytic Converter