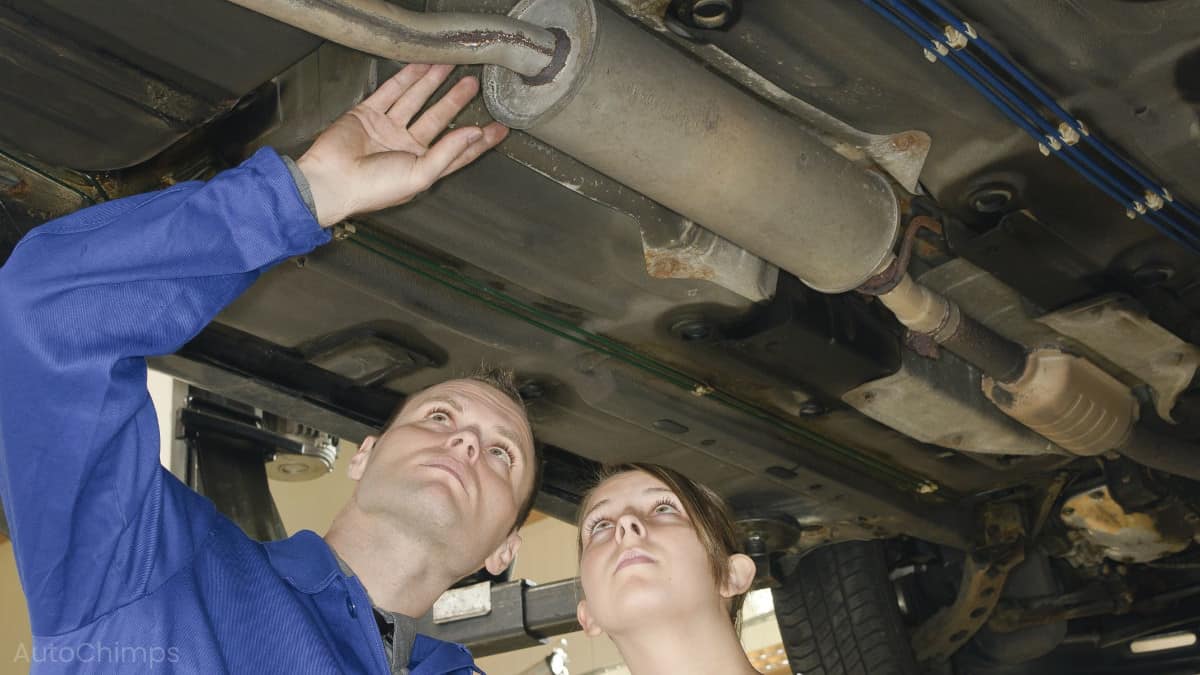 Not sure what the muffler on a car does?

We will give you a hint: its purpose is defined in its name. That’s right, one of its main jobs is to “muffle” the amount of noise coming out of your tailpipe.

What are the symptoms of a bad muffler?

The most obvious sign of a faulty muffler is excessive noise coming from the exhaust.

This will often coincide with a drop in fuel economy, sluggish acceleration, or engine misfiring. Ignoring muffler issues can not only cause harm to your engine but also result in a hefty fine.

Thankfully, in this guide, we will cover everything you’ve ever wanted to know about muffler repair, as well as the costs associated with them.

But first, let us take a closer look at what a muffler is and how it works.

What It A Muffler And How Does It Work?

A muffler is the last part of the exhaust system that the exhaust gases pass through before they exit the tailpipe. Without a muffler, your car will make a loud growling sound rather than the subdued rumble that you are accustomed to.

There are several different types of mufflers, including chambered, turbo, and straight-through.

A chambered muffler works by redirecting the sound waves that enter back onto each other, which effectively cancels them out. If you didn’t already know, this is similar to how noise-canceling headphones work. They emit a specific frequency to neutralize certain noises before they reach your ear.

A turbo muffler works much the same as a chambered but takes it a step further. Instead of a chamber, the gases pass through a series of perforated tubes surrounded by sound-deadening materials.

Not only is this the most effective type of muffler, but it’s also the most common.

And finally, there’s a straight-through muffler. As its name implies, the exhaust gas passes straight through this type of muffler rather than circulating. Inside is a perforated pipe that’s surrounded by steel wool and fiberglass insulation.

The difference is that instead of emitting sound waves, a straight-through muffler converts them into heat.

Straight-through mufflers increase performance by reducing back pressure from the engine. This is because the gases can flow freely rather than being hindered, leading to increased horsepower and better fuel economy.

The downside of straight-through mufflers is that they do not muffle the noise as well as the other types. Instead of that, they clean it up to produce something more refined. They also rarely have a catalytic converter, which is required by law on newer vehicles to help reduce emissions.

Now that you have a better idea of what a muffler is and how it works. Let’s look at a few of the most common symptoms that suggest yours has an issue.

Symptoms Of A Bad Muffler

As you might have guessed, if your muffler is no longer muffling the sound of your exhaust, there’s likely an issue with it.

Because of their close to the ground location, mufflers see a lot of abuse. If yours ends up rusting or develops a crack, a loud growling sound will escape behind the tailpipe.

However, this doesn’t specifically mean the cause is the muffler. It may also stem from a leaking manifold gasket, which seals the connection between the cylinder head and intake manifold.

Regardless, if your muffler sounds like an angry dinosaur, you’ll likely attract the attention of law enforcement, which can lead to a hefty fine.

A Drop In Fuel Economy

If you are spending more time at the gas pump, it might be due to an issue with your muffler, especially if it matches up with other items on this list. Why? Because when it’s not working correctly, your engine has to work harder, meaning it will burn more fuel.

Mufflers are required by law on all modern vehicles across the country. Because of this, automakers design their cars with them in mind, incorporating them into the fine-tuning of their operation. If there’s an issue with your muffler, it’s likely to throw the whole system off-balance.

If you haven’t yet noticed, any noise from your muffler other than a subdued rumble coming out of the tailpipe, suggests something is not right.

If you hear a knocking or banging sound, it’s possible that one of the mounts that hold the muffler in place has come loose or has broken. In this case, you may notice your muffler is sagging, or even dragging on the ground.

As for a rattling sound coming from your exhaust system, this suggests that your catalytic converter might be failing.

A catalytic converter is in charge of reducing how toxic the air coming out of your tailpipe is. If yours is old or damaged, the internal components of it may begin to collapse, which can result in a rattling sound.

There’s a reason your tailpipe is found at the rear of the vehicle. Because the gasses coming out of it are unhealthy to inhale, and even fatal in high doses.

If you start noticing the strong smell of gas (or any kind of chemical), there may be a crack or hole in your muffler. It’s also possible that there’s damage to your exhaust somewhere before the catalytic converter.

It’s pretty easy to notice when your car isn’t acting quite right. If you experience a lack of power when trying to accelerate, there may be a leak somewhere in your exhaust system, like your muffler.

Depending on where the leak is, it may throw off your O2 sensor. The ECMwill then try to compensate by adjusting the air/fuel mixture inside the combustion chamber, which can lead to a loss of power.

Similar to reduced fuel economy and slow acceleration, if there’s an issue with your muffler, it can cause your engine to misfire. This usually happens due to an incorrect air/fuel mixture inside the combustion chamber.

While it doesn’t necessarily mean there’s an exhaust leak, it does suggest it. Other possibilities include worn spark plugs, a vacuum leak, worn valve seals, or fuel injector failure.

Regardless of the exact symptoms, it’s never a good idea to ignore a muffler issue. Not only will you likely spend more on fuel, but it can also lead to costly engine repairs being needed.

The good thing about a damaged muffler is that unless it’s completely blown out, a repair is likely possible.

If you do need to have it replaced, expect to spend between $150 to $300. The exact amount depends on the make and model of your car, the type of muffler you replace it with, and whether or not any extra parts need replacing as well.

Some vehicles, such as luxury or performance models, may have a premium muffler, which is likely to cost more to replace. You may be able to reduce the costs by replacing it with an aftermarket muffler that’s not built for any specific model.

Keep in mind, though, that OEM parts are almost always recommended by automotive experts. These ensure that your vehicle will function as originally intended. They also shouldn’t affect any manufacturer warranties if installed by a certified mechanic.

Thankfully, if there’s a hole in your muffler, either from rust or damage, there’s a good chance it can be repaired. This usually consists of sealing the hole using a specialty paste, tape, or a patch. Many of these (depending on the extent of the damage) are possible at home.

If it’s something more severe that requires a section of the piping around the muffler to be replaced, it may be better to let a professional handle it. Regardless, even in this scenario, you shouldn’t spend more than $200. Though, keep in mind this likely won’t include the diagnostic fee.

Your best bet is to do a visual examination of the muffler, scanning for any clear signs of damage. If you notice a hole or an area that’s rusted through, repairing it yourself is likely an option.

If the muffler or the piping around it has been crushed or bent, then taking it to a professional may be the best choice.

Muffler damage is one of those things that you just can’t ignore.

While you may be able to live with a drop in power or fuel economy, or a knocking or rattling sound. There’s no way you’ll get too far if your car sounds like a rocket ship.

Why? Because you will likely end up with a traffic citation that totals more than a repair would have cost in the first place. 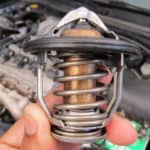 How Does A Car Thermostat Work?