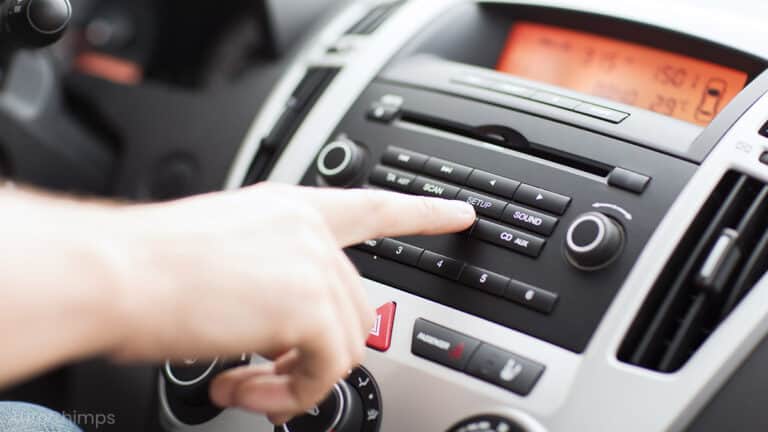 Do you love a good old CD? Perhaps you’re reluctant to swap your collection for a new-fangled MP3 system.

Finding a new car will be difficult if CDs are a priority. Not impossible – but almost. Sorry. That’s the reality of the current market.

These days, almost all new cars don’t come with a CD player as standard. Instead, you’re much more likely to find Bluetooth-enabled or plug-in infotainment systems.

So, what are your options? This guide will walk you through the various things you could do.

You’ll still find CD players on certain specific models from some manufacturers. They aren’t always standard and might need to be added as an optional upgrade.

However, if you look closely enough, they’re still available in one or two popular brands. These seem to be exclusively limited to Japanese carmakers. Here’s a list of a few 2022 models you could check out. It’s by no means exhaustive, but CD players are few and far between these days.

In short, they’re difficult to find.

It seems likely that CD players will likely be almost entirely obsolete in the next few years.

Why Don’t Most New Cars Come With CD Players?

Spotify, Apple CarPlay, and Android Auto currently dominate the market. Apple claims that 98% of new cars may contain CarPlay. Their research also indicated that 79% of Americans would only buy a new car if the feature came with it.

That figure may be a little selective, but most cars certainly have either CarPlay or Android Auto functionality. It shows the way the market’s going. It’s also unsettling for the automotive industry as a whole as Apple and Google work their way into the industry. That’s another story, though.

That’s partly because of their marketing strategies but mostly because we – the population – buy into what they sell.

Our smartphones are full of hundreds, if not thousands, of songs, podcasts, eBooks, and other audible media. Today’s devices are literally millions of times faster than NASA’s 1960s rockets. How crazy is that?

Your smartphone can hold more music than hundreds of CDs. So, why would you bother getting one? Why not just put everything on your phone?

It’s a good question! And, of course, the answer is that most people prefer the convenience these systems provide.

Car makers, in turn, will design and build their vehicles to sell as many as possible. They want to turn a profit, after all.

With the rise of digital media, CD players are considered unnecessarily bulky, especially when most people don’t use them. They take up space behind the dashboard, interfering with the infotainment system. They’re also heavy, and all manufacturers want to save weight wherever possible.

In the end, you – as a CD enthusiast – are (sadly) now in the minority. A manufacturer is unlikely to build a car with a CD player because hardly anybody wants one. To them, it would be a waste of money.

There Aren’t Many CD Players In New Cars – Now What?

You might have spent years saving up your CD collection. It’s perfectly understandable that you don’t want to throw it away in exchange for digital media.

There’s good news! You don’t have to!

Here are a few of the potential paths you could take.

You don’t necessarily need to buy a new car. Often, second-hand cars can be more worthwhile from a depreciation point of view. They’ll also come with CD players.

Apple Car Play and Android Auto became really popular around 2017. They were released in 2014/2015, respectively.

If you look at any vehicle released before 2017, and certainly before 2015, it’s likely to have a CD player. Of course, don’t take that as a given. Make sure you check before you buy!

2. Upload Your CD Music To A Digital Device

You might feel some internal resistance to this, but if you need a new car, it’s your best bet.

You can burn (copy) the files on your CDs to a local device like your computer. From here, you could either save them to a USB stick or upload them to your smartphone.

If you’re worried or confused about this process, check out the video above. It’s a brief, carefully set-out step-by-step instructional clip.

When you connect to your car with Bluetooth, Apple CarPlay, or Android Auto, play your CD music from your phone. Make sure you place it somewhere legal and safe. It’ll play through your car’s stereo.

You can purchase some aftermarket CD players that simply attach to your car via a USB cable.

Other aftermarket CD players are available, but USB versions are the least intrusive. You’ll still need to have it wired in, which might involve removing some trim or dashboard panels.

Once you’ve installed a USB CD player, you’ll put your CDs in. You’ll then play music in the same way as you’d do it from your phone.

Warning: if the CD player isn’t installed correctly or the ECU malfunctions, it may cause a parasitic drain. That’s when something draws current from the battery even after the car’s turned off.

If you notice your battery going flat much more often than usual, this may be the cause. The battery warning light might also come on.

What’s The Best Option For New Cars Without CD Players?

The simplest option is to upload the music from your CDs to your phone or another compatible device. You can then play your songs, books, and so on from it.

You could install a USB CD player, but this isn’t the best use of money for most people. CDs are phasing out (for better or worse).

As they become less popular, there are far fewer on sale, and they’re much harder to find and buy. You won’t see many new CDs over the coming years, and even the old ones will disappear.

Of course, if you’re dead set on CDs, go for it!

Finally, consider not getting a new car at all. The vast majority don’t need a vehicle that’s just rolled off the production line. Instead, buy something five or six years old, in excellent condition, with a CD player.

So, in summary – do new cars come with CD players? No. Well, some do. But for most, it’s a thing of the past. 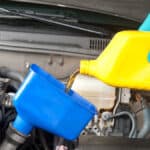 When Does A New Car Need An Oil Change?