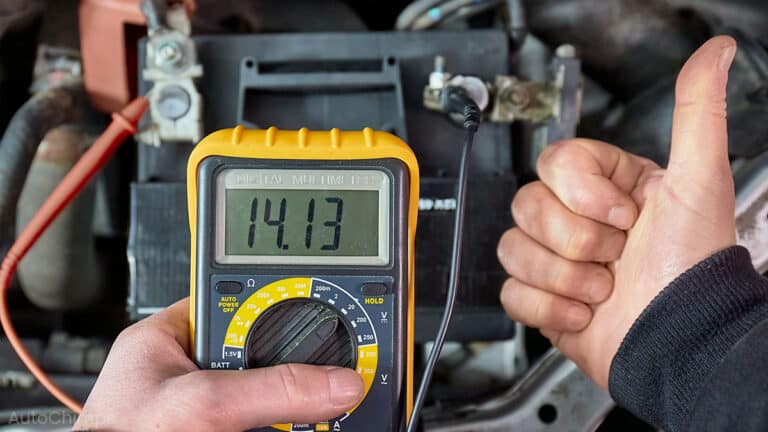 It takes about 30 minutes of driving to charge a car battery while driving completely, provided the battery was almost charged before starting.

In a modern car, the engine speed should be around 1,500 rpm or more to ensure it’s charging properly.

How long it takes is affected by the following:

The answer to this question applies to every driver, especially those who regularly complete short, stop-start trips.

Make it last as long as possible by never using the lights or radio while the car is switched off. Only use the necessary electrical appliances at all times.

If work or school is only ten minutes away and you have to pass through twenty sets of red lights to get there, your car battery will probably be a little worse for wear.

This guide will address how long it takes to charge a car battery (while driving) and how this works. Let’s get started.

Does A Car Battery Charge While Driving?

It certainly does. A car is fitted with a 12 V (12.6 V) battery. This functions in much the same way as any other battery, like the one on your phone or laptop.

When you turn your car key to the START position, the battery sends a significant amount of electrical power to the starter motor. This cranks (turns) the flywheel, giving the engine the momentum it needs to run under its own steam.

When it sends all this power to the starter, the battery is discharging. It’s an essential and perfectly normal part of how a car works.

As soon as the engine’s running, it kicks everything into life. Attached to the crankshaft – the rotating mechanical output at the bottom of the motor – is the alternator (along with other components, such as the AC compressor and power steering pump). It’s connected via a belt.

The alternator is basically a relatively large electromagnetic generator. It recharges the battery as the engine rotates. These days, provided the engine is turning fast enough (at least 1,500 rpm), the alternator should recharge the battery at the same rate, regardless of rotational speed.

An alternator spins a magnetic core inside an armature coil. This spinning magnetic field induces magnetic flux, creating a charge.

Slip rings feed the excitation current to the armature, and the stator coils generate the alternating current.

The voltage regulator ensures the alternator charges the battery with between 13.5 and 14.5 Volts. In some situations, the charging voltage can go much higher. That’s why a battery tester (which you should use fairly regularly) displays these readings when the engine’s running.

Almost all the electricity produced by the alternator goes straight to the battery as DC. Here, it charges the cells. The battery will instantly require most of this power to run the electrical components within the car. Switch as many of these off as possible.

Still, over time, the battery will become fully charged again while driving.

Best Way To Charge A Car Battery While Driving

The best way to charge a car battery while driving is to journey along the highway relatively quickly, for around half an hour. As a general rule, you should be aiming for speeds of around 55 mph or higher.

A 30-minute journey would be enough for a weekly top-up of your battery. If it’s already on low charge when you get in (if you’ve been using a lot of electrical appliances recently), you may need to drive much further.

You should know that the engine’s speed matters here, not the car’s. It should be running at a minimum of 1,500 rpm.

Basically, you don’t want the engine to be idling. Anything above 1,500 rpm should produce enough charge for the battery to manage the alternator’s voltage regulator field current and power the rest of the car while recharging.

Sitting in the car while the engine’s running could be illegal when you aren’t going anywhere. However, technically speaking, your vehicle would charge if you simply sat on your driveway for half an hour with the car in neutral and your foot resting on the throttle.

That doesn’t make much financial sense, though – plus, it might not be legal (although nobody’s likely to call the cops on you, someone could). If you’re going to run your car for half an hour, you may as well go somewhere.

Other Ways To Charge A Car Battery

If your car starts, just drive it. The alternator should recharge the battery if you follow the steps mentioned above. If you regularly complete short journeys (see the next section), go for a longer drive once per week.

Your car could sit stationary for weeks at a time – Covid lockdowns, for example. Removing your battery and connecting it to a trickle charger will keep it in the best possible health.

Find yourself with a dead (“discharged“) battery? Jump-starting or bump-starting is the way to go.

Jump starting uses jumper cables from another car or electric grid to push current into your car’s battery. It should then run under its own power. Bump starting, on the other hand, uses the gears to force the engine into action, provided the ignition turns on.

How Should I Charge My Car Battery While Driving If I Only Make Short Journeys?

The best approach is probably to select the right car in the first place. Most internal combustion engines are designed to run – they need to power an entire vehicle, after all.

If you’re a city driver, these low-rev journeys will be unavoidable. A standard internal combustion engine (ICE) car will, by its very nature, struggle with these over time. Still, you probably won’t notice any problems for tens of thousands of miles.

Plan for the future with a hybrid or electric car (EV). The infrastructure isn’t quite there yet, but rising fuel costs and inflation mean that owning an EV may soon be more financially sensible than a gas or diesel model.

Of course, these cars are powered completely differently from “standard” vehicles. However, remember that hybrids, in particular, are specifically created to handle slow city driving. You should find you have few problems if you purchase a reliable, warranty-covered model.

Does A Car Battery Charge Faster When Driving?

“How long is a piece of string?” How quickly a battery charges depends mainly on a few factors:

In general, yes – a car’s alternator will charge a battery faster than a mains electrical charger.

This is because most car batteries have an average charge storage capacity of 48 Ah (Amp-hours). A car puts out much more current than most mains chargers.

It’ll take a car less than an hour to fully restore the battery’s charge. In comparison, you should expect a basic charger to take at least 4 to 6 hours to resupply the same battery.

A trickle charge will, of course, take longer – perhaps up to two or three days.

Note: It isn’t always safe to use mains battery chargers! You should always check the instructions on the battery to ensure it’s safe!

Does A Car Battery Recharge Itself While Driving?

A battery doesn’t technically recharge itself. The alternator recharges it as you drive. The “electricity” (let’s keep things simple) then goes straight back out into the car’s circuit.

It should take around 30 minutes, although it depends on several factors (see the previous section).

Conclusion – How Long Does It Take To Charge A Car Battery While Driving?

The exact amount of time it takes to charge a car battery while driving depends on a few factors. The most critical thing you can do is avoid discharging the battery while the engine’s off by ensuring everything is switched off.

A car battery in good condition, starting from a reasonable charge, should be fully recharged in 30 minutes.

Read your owner’s manual! These will give you all the instructions you need to care for your car’s battery and keep the electrical system in prime condition! 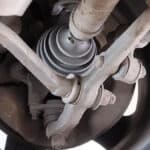 CV Joint Noise While Driving? Here’s Why And How To Fix