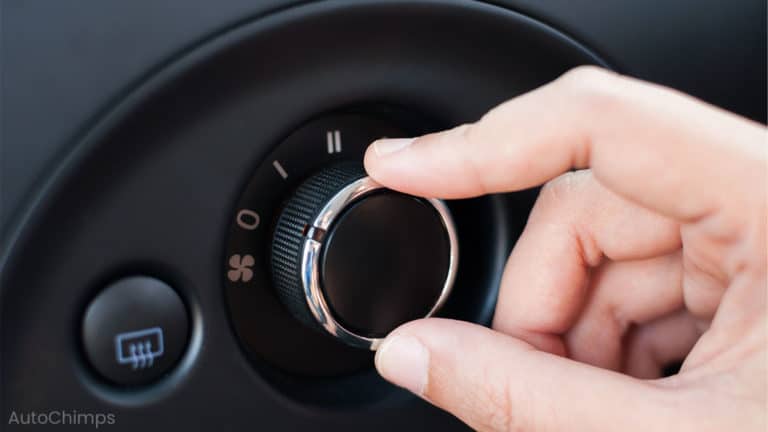 Has the air conditioner in your car recently let you down?

There are not many things worse than expecting an ice-cold breeze but instead being met with a blast of heat.

If you’re scouring the web for answers to “why is my car AC blowing hot air?” then you’ve come to the right place.

The most common cause of an AC system blowing warm air is a lack of refrigerant, though you may also have a problem with your condenser. Other possibilities include a faulty compressor, broken cooling fans, or an issue in your electrical system.

Thankfully, in this guide, we will review each of these car AC problems in detail.

But first, let us explore how exactly the AC system works for a car to help you better understand why it is having issues.

The compressor takes low-pressure, low-temperature refrigerant while it’s in a gaseous state and, as its name implies, compresses it into a high-pressure, high-temperature gas.

The condenser acts as a mini radiator. It receives the high-temperature, high-pressure gas from the compressor and radiates the heat out of it. When this happens, the refrigerant condenses, converting it into a high-pressure, lower-temperature liquid.

There’s also a pair of cooling fans that blow over the condenser. This removes much of the heat from the refrigerant while it’s in the lines.

The receiver/dryer is in charge of removing moisture from the refrigerant now that it’s in a liquid state. It does this by filtering it through desiccants, a moisture-absorbing substance.

If you’ve ever found a small packet in a bottle of medication or in a new pair of shoes, it’s actually the same stuff.

Not only that, but this process also converts it back into a gaseous state, except this time, it’s low-temperature, low-pressure.

Some systems feature an orifice tube instead of an expansion valve.

They both work similarly, except that the former can regulate the size of its opening based on the temperature in the evaporator. In this type of system, the receiver/dryer is replaced with an accumulator, which also works similarly.

The evaporator also works like a radiator, with lines inside that the refrigerant passes through. While in these lines, the heat is absorbed and sent outwards, reducing it to about 32 degrees.

The unusual thing about coolant is that unlike water, which freezes at 32 degrees, it boils. This not only lowers the temperature further but also causes it to evaporate, turning it back into a gas.

A fan then blows over the evaporator, pushing cold air-conditioned air into your cabin. The coolant returns to the compressor as a low-temperature, low-pressure gas, starting the process over again.

Your Car Is Leaking Refrigerant

Since refrigerant is recycled over and over, the only reason you should ever have to recharge it is if there’s a leak somewhere in the system. The first sign of a leak is if your AC starts blowing warm air.

Sadly, identifying exactly where the leak is coming from can be difficult. Why? Because once it reaches an area of low pressure, such as a leak, it returns to a gaseous state.

There are two options to take care of an AC leak.

The first is to take it to a shop, which will locate the leak and repair any damage or replace any worn parts. Depending on the severity of the issue, this can run anywhere between $225-$1600. If the leak stems from a worn hose, expect it to be less than if the compressor needs replacing.

The second option is to use an AC leak sealer, though keep in mind that these products are meant for small leaks.

There are two types of leak sealers. The first kind conditions the seals, causing them to swell. The second kind flows through the system until it reaches a leak and forms a solid substance to help block it.

You can pick up a canister of either for between $25-$50. Most feature a nozzle that connects directly to the high-pressure port. Regardless, be sure to follow the product instructions step by step.

The Condenser Is Malfunctioning

If you remember from earlier, the condenser is in charge of removing heat from the refrigerant and then expelling it outward. If, for any reason, it’s malfunctioning, your car AC will blow warm.

Since the condenser rests behind the front grille, it’s possible that road debris has caused a blockage or penetrated one of the inside lines.

While removing a blockage is possible, repairs are usually not, meaning you’ll need to replace it. Replacing a condenser costs anywhere from $450 to $950, depending on the make and model of your car.

Issues In The Electrical System

If your AC is blowing hot air, the last thing you want it to stem from is an electrical issue. Why? Because tracking down where the problem is can be tough since many of the wires aren’t visible without dismantling the system.

Many of the AC components need electricity to function, and if they aren’t receiving any, your AC system will likely blow warm.

While you may be able to mend any frayed or damaged wires with electrical tape, your best bet is to take it to an experienced professional.

Problems With The Cooling Fans

As discussed earlier, the condenser also has a pair of cooling fans that help reduce the heat of the refrigerant while it’s in the lines. If these are broken or malfunctioning, the AC system will not operate as intended.

There are several reasons they might stop working, such as a fuse blowing or an issue in the electrical system. They may also become damaged from road debris due to being near the front of the car. In this case, replacement is the only option. Expect to spend between $300-$500 to replace them.

The Compressor Is Faulty

It all starts in the compressor, and as you might have guessed, if it’s not working correctly, neither will the rest of the system. Why? Because the compressor is what gets the refrigerant moving in the first place.

Why do AC compressors go even bad?

One of the most common causes is lack of use. Whenever you crank your AC after long periods without use, it can shock the system, which can cause it to wear faster than usual.

For this reason, it is always a good idea to run it for about 15-minutes every few weeks.

There are a lot of moving parts in the compressor, making it almost better to replace it than repair it.

Sadly, you’re still looking at a replacement cost of between $500 to $700. Thankfully, you can prolong the life of your AC compressor by using it more frequently.

Why Does Your Car AC Blow Hot Air?

That is because something internally is malfunctioning and needs your attention.

Thankfully, if you have made it this far, you should have a much better idea as to the cause. The longer you wait to resolve the issue, the more likely it is to lead to something more severe.

Regardless, can you really survive in a hot climate without a working AC system? It’s not worth it. 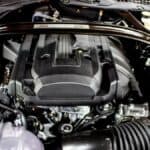 How Does A Car Engine Work?