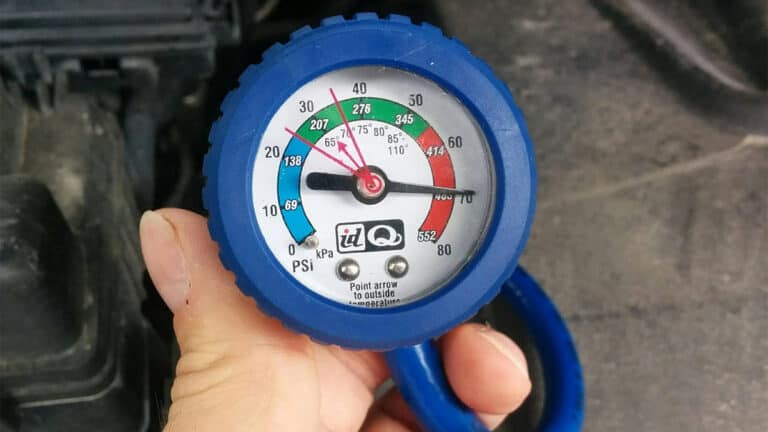 You might suspect your car AC is overcharged. But how do you know?

In reality, there’s no way to know for sure apart from visiting an AC technician. They’ll use the correct (legal) equipment to check and top up your refrigerant levels.

Your car’s air conditioning needs just the right amount (and type) of refrigerant. Too much puts too much strain on the system, reducing its efficiency.

Always remember that you should never work on your car’s air conditioning at home. This isn’t a job you can DIY. It’s illegal and too technical to get right without the proper equipment. You’ll damage your system.

This article explains what you need to do if you notice signs of an overcharged AC.

How Does The AC System Work?

There’s no need for too much detail here. However, you should be aware of the basic principles of air conditioning. Fundamental knowledge will help you understand why overcharging AC systems lead to the symptoms mentioned below.

Refrigerant is a gas (in its natural form). There are three in use today, although almost all on the road take R-134a or R-1234yf (which all new cars have):

It’s contained in a series of high-pressure and low-pressure pipes. You can see a couple of these when you open the hood.

The gas is pressurized and pushed through these pipes by a compressor. In ICE cars, this is driven by the engine’s crankshaft via the serpentine drive belt.

The refrigerant passes through the condenser (“hot side”) and evaporator (“cold side”). Through this process and changing between high- and low-pressure gas and liquid states, the heat and moisture are removed from your cabin.

In brief, that’s how your car’s AC works!

Now, imagine there’s too much gas in the system. There’s too much pressure, putting unneeded strain on the compressor. It then can’t push the refrigerant through so effectively. As a result, the condenser, evaporator, and all the other components won’t work so well.

Why Is My Car AC Overcharged?

A trained AC technician shouldn’t ever overcharge your system.

They use specialist machines that fill your car with exactly the right amount of refrigerant. Before topping your vehicle up, they’ll take data straight from the manual to ensure it’s accurate.

After all, if they over- or undercharge your AC and it doesn’t cool the air, you won’t be going back, will you?

Of course, it’s always possible that a technician is having a bad day. However, the much more likely problem is that someone has tried a DIY air conditioning top-up.

First of all, that’s almost certainly illegal. You must be qualified as an air conditioning refrigerant handler to work with AC refrigerant. That might seem overboard, but this stuff is incredibly bad for the environment.

Second, any trained AC technician will know to use the proper equipment, quantity, and materials. So, even if a certified person were to work at home, they wouldn’t use a DIY kit.

The air conditioning refrigerant machines that shops use cost thousands. That’s partly why a re-gas is so expensive (the cost of gas and oil is also high). Why would you use a $10 knock-off from Amazon? It won’t do the job correctly.

Symptoms Of An Overcharged Car AC

Here are some of the most common symptoms of an overcharged automotive air conditioning unit.

In short, you can expect your air conditioning to stop working efficiently.

Warm Air Coming Out Of The Vents

If it’s a warm day, your car won’t be able to cool the air entering your cabin. Air will still come in (unless there’s a separate problem with the vents or fans).

How poor the cooling effect is depends on how overcharged your AC is. The greater the quantity of refrigerant beyond the normal level, the less warmth will be removed from the air.

At a technical level, the rate of heat transfer in the condenser and evaporator is lower. It can’t exchange as much heat/cool with the air.

As a result, it’ll still feel warm, even if you turn the temperature down to its minimum setting.

This only applies on hot summer days. The air might be cool in other seasons – it doesn’t need much further temperature reduction.

Humid Air Coming Out Of The Vents

Do you live in a humid part of the world, such as Florida? If so, you’ll be able to feel the difference between “normal” air and what comes through your AC.

The air conditioning in your car also removes moisture via the cooling fins of the evaporator.

You might notice that the air coming through the vents is more humid than usual, even with the AC on.

Again, this problem happens because the refrigerant isn’t being pumped around the system so efficiently. It doesn’t get so cold, so the moisture doesn’t condense into water droplets.

There could be several signs of a broken AC compressor in your car.

If the compressor can’t “squash” the refrigerant enough (because the AC has been overcharged and there’s too much in it), it might break. It certainly won’t operate at peak efficiency.

If the compressor breaks, your AC is effectively useless. It can’t do anything.

Thus, an overcharged AC could completely break the system.

How To Tell If AC Is Overcharged

You might notice some of the above symptoms. However, it doesn’t necessarily mean you have an overcharged AC.

For example, if the compressor breaks (due to wear), it would result in precisely the same symptoms. An undercharged AC would also give the same effect, as would a leak.

What is the best way to tell if your AC is overcharged? Go to a mechanic.

They’ll hook your car up to the machine and read the pressure gauges. This means they can tell you what’s wrong instantly – and then fix it.

How Do You Fix An Overcharged AC?

The fix for an overcharged AC is simple. Go to a mechanic and get the system re-gassed.

A re-gas should come to around $150. Factors that might affect the price include the refrigerant type, quantity, and oil amount.

The mechanics will re-gas it to the level it was designed for. You should then be able to use it as usual.

Unfortunately, they might find your overcharged AC has led to other issues. For example, the compressor could be damaged.

In this case, you’ll also need to pay for replacement parts. This particular job (the compressor) could come to about $900 but would include the flush and re-gas.

You will need to see an air conditioning specialist for severe issues like leaks. 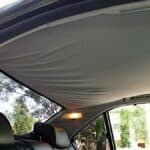