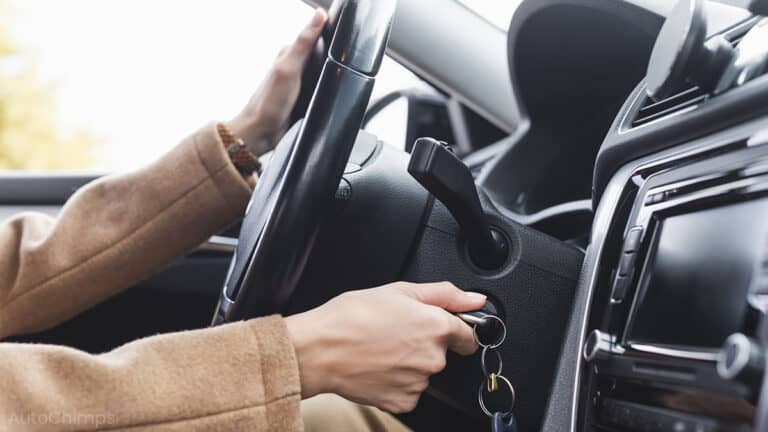 If your car struggles to start but runs fine, there are many possible causes. This guide will run through a few of them, explaining why your engine’s finding it so hard and what you can do to fix it.

Apart from mechanical wear and failure, a few other factors can make a difference, such as the weather, temperature, fuel type and condition, and vehicle age.

Check for any lights on your dashboard, too. These can be very informative.

Although you’ll find a few different ideas on this page, there’s no substitute for an in-person diagnosis from a skilled mechanic.

Specialist equipment such as battery testers and OBD II code readers (both of which you can get for yourself if you like) are invaluable here.

If your car has trouble starting but runs fine, it’s most likely down to a minor fault in the electrical system.

There are many other possibilities you should consider, too, of course. Still, an electrical inspection will probably solve this problem for the majority of drivers.

Remember, it’s not necessarily about the battery. The electrical system also comprises a few other prominent players: the starter motor, the key, the alternator, and miles of wiring.

The starter motor (or related problems) will be the cause in many cases. This is especially true if you find that the car struggles to start, but the battery is fine.

The starter motor is connected to a circuit that includes the ignition key and the battery. An electrical current is sent to the motor when you turn the key.

It then pushes its pinion to mesh with the engine flywheel. Electricity powers this small pinion with high torque, cranking the engine and giving it the boost it needs to start. It’ll then run under its own momentum.

If the starter motor has developed a wear-related fault and isn’t functioning well, it’ll be difficult to crank the engine. As a result, the car struggles to start.

Check the starter motor’s condition using a specialist battery tester, saving the need to remove it from the car. If you find that it’s in poor condition, it’ll need rebuilding or, more likely, replacing.

When you twist the key in the ignition, all the power comes from the battery. The engine isn’t yet running, so the alternator won’t be doing anything. If the battery’s struggling to hold its charge, it won’t be able to send as much power to the starter motor as it should.

This could be caused by a couple of things. If the battery has a crack, leak, or other damage, it won’t be able to hold a charge. Likewise, if the alternator isn’t operating at its usual rate due to an internal fault, loose pulley, or loose belt, it won’t recharge the battery quickly enough.

A final important factor is the length of your journeys. It can take a battery half an hour of highway driving to recharge fully.

If you take lots of shorter, stopping-and-starting city trips, your battery will wear out much faster. Take your car for an hour-long fast cruise up and down the freeway to see if the problem persists.

Again, a battery tester is the best solution here. It’ll reveal any problems with either the battery or the alternator. These can then be replaced if necessary.

Bad wiring could be why your car is hard to start but runs fine. There are miles of wiring looms within a modern vehicle, so start with the ignition wiring and connections to the starter motor.

The starter motor circuit is activated when you turn the key to START. If there’s an issue here, it could be sending less current than it should.

Unless you’re an electrical expert yourself and have access to your own equipment (multimeters and such), this may require professional diagnosis. Take your car to an automotive electrician and go from there. Unfortunately, this can be pretty expensive, but there could be no way around it.

It’s best to rule out other potential causes before investing in electrical diagnosis.

Almost any engine component, if working improperly, could lead to this issue. Aside from those mentioned below, consider checking the ignition timing, camshaft, timing belt, distributor cap, and all filters (air, oil, and fuel).

Over time, the spark plug gap can widen. As such, they require more electrical power for a spark to bridge the said gap.

You could notice this when starting because the motor might need to crank longer than usual before it gets going. However, once the alternator’s working with the engine at higher revs, the spark plug gap might be much less of an issue.

Fixing this requires re-gapping the spark plugs. Although you’ll need some depth gauges, it’s a relatively straightforward process. Alternatively, you could change all the spark plugs for new ones (something that needs to be done fairly often anyway).

The fuel injectors‘ jobs are to inject the fuel (big surprise!) into the engine. They’re controlled by electronics and specifically designed to put a certain amount of gas or diesel into the combustion chamber.

If the fuel injector fails to insert enough fuel (or too much), the resulting air/fuel mixture won’t burn properly. This will lead to the engine struggling to start.

The problem’s likely to persist while the car is running. However, if it’s only a minor issue, you might not notice it so much as during the engine starting process.

Faulty injectors will need replacing. You can use a multimeter to check whether each part is working. An OBD II code reader may also give you your answer. You should only expect one or two to fail at any given time.

For any more to stop working would be very unusual and probably indicates a deeper electrical issue.

Believe it or not, the weather can significantly impact your vehicle, especially while starting – cold weather, in particular. Cars don’t like negative temperatures, chilly winds, snow, ice, or freezing fog/rain.

When it’s winter, all the liquids in a car are either thicker or freeze entirely. Fuel and motor oil both struggle to flow until they warm up. Water in batteries can freeze, leading to low power (or none at all!).

In freezing climates, such as the northern states, Canada, Scandinavia, or Russia, cars might regularly need a boost from a battery charger to get them going in the morning.

Once the car is running, though, it should warm up within ten or fifteen minutes, and everything should run as usual from there.

So, is it a cold day? Or perhaps a mild day with a cool blast coming out of the north? Even an exceptionally humid day? Any of these could be why your car’s hard to start when cold but then runs fine.

The best option is to park your car in a shelter like a garage or even a makeshift tent. It’s not a perfect solution, but it might make a difference.

Be careful with carbon monoxide exhaust fumes when starting the vehicle. These can be deadly if you don’t open the doors before starting the car.

Space heaters are also an option but aren’t recommended. They’re known to cause fires.

When an engine struggles to start but seems fine once it’s going, it needs diagnosing as soon as possible. Although it might feel like an inconvenience, it’ll be a real bother if you drive 20 miles to work and then get stuck there when the car won’t turn on.

You can check, eliminate, or confirm many potential causes yourself using DIY tools. Start by considering the weather’s impact, then check the ignition, electrical systems, and engine components.

If you can’t find the problem’s source, take your car to a trusted local mechanic. Getting it fixed as quickly as possible is likely to save you much more in future costs. 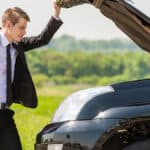 Car Stalls While Driving? Here’s Why And What To Do