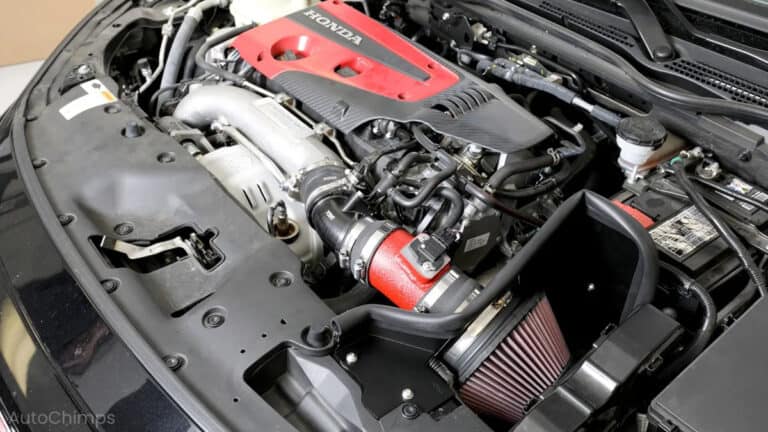 Cold air intakes are one of those popular aftermarket mods said to significantly boost performance. But what do they do for your MPG? Will it go up or down?

These days, saving fuel is essential. Driving is becoming more and more expensive, and every penny counts.

Are you considering installing a cold air intake to save on your gas bill?

If so, it’s probably not worth your time. Cold air intakes have a small impact on performance and fuel economy, but without any other modifications, it’s minimal.

A cold air intake usually won’t harm your car’s MPG. But it won’t do that much for it, either.

This guide explains what a cold air intake is and how it impacts your MPG.

What Is A Cold Air Intake?

A cold air intake replaces your car’s regular air intake. It’s usually a simple bolt-off, bolt-on procedure and was first seen as an aftermarket modification in the 1980s.

In reality, reducing the air’s temperature is the same as increasing the density. It’s this density change that makes the real difference.

With more oxygen going into the motor, combustion is more efficient. The air/fuel mixture ignites with more force, creating more power on its downward stroke. This leads to more overall engine horsepower.

(This is the same principle as bellows for a fireplace. Adding extra oxygen increases the flames’ heat. In an automotive application, this equals more power!)

Thus, a cold air intake improves engine performance. At the same time, it can positively impact fuel economy, engine health, and many other things.

Check that a cold air intake is legal. The manufacturer must meet your state’s EPA guidelines. If it doesn’t, you can’t install it on your car!

How Much Does A Cold Air Intake Cost To Install?

Most kits are relatively simple to attach to your car yourself. If you choose to get it installed by a mechanic, expect to pay up to an hour’s labor on top. That would typically come to between $80 and $100.

Again, you’ll need to check environmental, tax, warranty, insurance, and other legal regulations before doing so.

One motor will react completely differently to another with the same cold air intake.

Having said that, cold air intakes do increase engine efficiency. You get more oxygen into your engine than you would otherwise. How much extra oxygen, though, is highly variable.

Again, though, this is minimal. It isn’t something you’d ever notice without computers logging your precise mileage.

Some manufacturers estimate their cold air intakes will give you MPG gains of up to 5 MPG. This seems over-generous. Real-world tests are in order!

Why Will A Cold Air Intake Increase MPG?

The primary benefit is increased performance. No doubt. However, improved MPG is a minor secondary advantage.

Well, think of it from this point of view. With better performance, an engine can work less hard to achieve the same power output.

This means that you don’t need to drive so aggressively to achieve the same level of performance you had before.

In The Real World, Does A Cold Air Intake Increase Gas Mileage?

Theoretically, yes – slightly. But what about in the real world? Can you see real-life MPG increases for these modified cars on the roads?

Who is most likely to install a cold air intake on their car? What is the part manufacturer’s target audience?

It’s not usually daily drivers – or indeed anyone concerned about fuel economy. No, the target audience is speed kings, boy racers, and car modifiers. Anyone with a big engine who only wants increased performance.

And there we have it. Cold air intakes might increase your gas mileage if you drive at the same speed as you did beforehand.

But almost everyone who wants a cold air intake has a lead foot. They’re interested in performance gains, not MPG.

And thus, the MPG benefits are often completely disregarded.

Driving sensibly could result in improved gas mileage – yes. It’ll be about as marginal as it gets, but there should still be some slight gain.

But will you really drive your modified car slowly? Are you really that type of person?

Car modifications look good, but alone (with a couple of exceptions) will do almost nothing for your MPG, performance, or engine health.

If you get a cold air intake installed by itself, you’ll hardly notice anything. That’s entirely against everything the manufacturers and enthusiasts will tell you. But it’s true.

However, paired with other performance-enhancing parts and mods, it can all add up. Consider other engine modifications, such as:

By combining these, you might end up with some significant power/gas mileage increases. It’s then important to ensure your wheels, tires, brakes, and suspension can cope. Consider upgrading these, too.

Overall, does a cold air intake improve gas mileage? Maybe. Slightly. But there are better alternatives from a fuel economy perspective.

If you’re looking for a fuel-saving modification, your best option is a remap or chip. Specialist technicians alter the ECU programming to increase the average MPG. The trade-off is, as always, reduced performance.

Alternatively, trade your car in for something with better stock fuel economy!

Can You Pump Gas With The Car On? Here’s What Happens