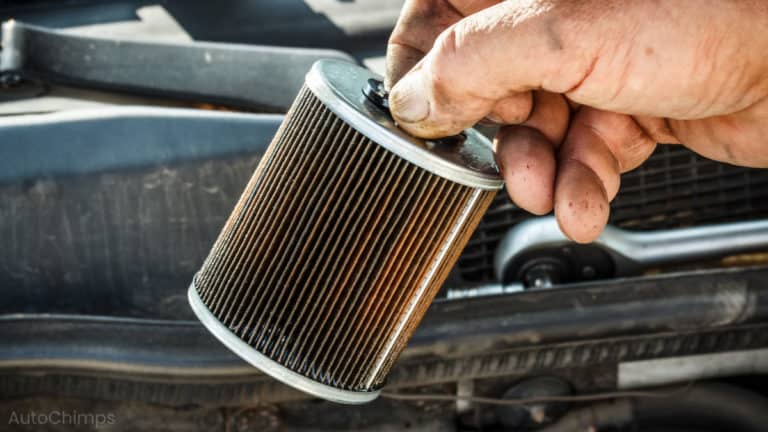 You wouldn’t drink unfiltered water from a stream, right?

The same goes for the fuel we put in our cars, which, thankfully, passes through a filter before reaching the engine.

What are the symptoms of a bad or clogged fuel filter?

The most common signs that you need a new fuel filter include starting problems, a check engine light, or reduced performance. You may also notice your engine stalls or misfires while accelerating. Replacement costs range between $50-$150 at a shop, or you can do it yourself for about $15-$60.

In this guide, we will look at each of these symptoms in detail.

But first, we will explain how a fuel filter works to help you understand why you should replace a clogged fuel filter.

Let’s get the basics down now!

How A Fuel Filter Works

Fuel starts in your gas tank and is pumped into the fuel lines via the fuel pump. Depending on the design of your system, the fuel filter sits somewhere in between. The purpose of the fuel filter is to screen out harmful debris before it wreaks havoc on the rest of the system.

Once filtered, the fuel gets sent to the injectors. These disperse a measured amount of fuel into the combustion chambers of each cylinder.

Once there, it’s mixed with oxygen and then ignited. This causes the pistons to move up and down, therefore powering the engine.

A general rule of thumb is to replace your fuel filter every 2 years or 30,000 miles. Though, you can likely push this to 60,000 miles or more on a newer vehicle.

Regardless, your best bet is to have a mechanic perform a pressure test with each oil change to ensure enough fuel can flow through. Each vehicle has a specific PSI range, so be sure to consult the manual for your model.

Now that you understand the basics behind how a fuel filter works let’s look at the symptoms that suggest it’s time to replace it.

Your Car Has Trouble Starting

There are many reasons an engine might struggle to turn over, such as bad spark plugs, a dead battery, or an issue with the alternator.

However, it can also mean insufficient fuel flowing to the combustion chambers.

A pressure test showing low PSI will indicate if it’s something in your fuel system, like a faulty fuel pump, clogged injectors, or a bad fuel filter. Though, an engine not starting likely won’t be the first sign of a clogged fuel filter. Be sure to check if it coincides with any of the below symptoms.

If so, you can count yourself lucky because the other reasons your engine won’t start are far more costly to resolve.

If you’re like most car owners, you probably have a love/hate relationship with the “check engine” light. Sure, it likely means a repair bill is near at hand, but it also ensures matters don’t worsen to a point where substantial damage occurs.

A check engine light will illuminate for an endless number of reasons. Thankfully, many newer vehicles feature built-in pressure sensors that will give off a specific code if there’s an issue in the fuel system.

To diagnose the issue, you have several options available.

The first is to purchase an OBD2 scanner yourself and use it to read the code. The second is to pay a shop to use their OBD2 scanner, which usually carries a diagnostic fee attached to it.

The third option is to take your car to a local auto parts store, where most will read it for free.

An engine typically stalls for one of three reasons, a lack of fuel, power, or air. With this in mind, it should come as no surprise that if there’s not enough fuel making its way through, your engine might stall.

Your engine may crank up just fine since there’s likely fuel still in the fuel lines. The issue is when you accelerate or tackle a steep incline since more is needed as you press the pedal. The same goes when towing a load since the engine has to work harder to haul, thus requiring more fuel.

Many things can cause an engine to stall, so be sure to look out for additional symptoms on this list.

Simply put, when an engine misfires, an error occurred in one of the combustion chambers that caused it to skip a step. Many things can cause an engine to misfire, including worn spark plugs, a faulty ignition coil, or a bad camshaft sensor.

However, since the fuel passes through the fuel filter before reaching the fuel injector. If it’s disrupted for any reason, it can also cause the engine to misfire.

This is especially true when you’re demanding more from your vehicle, such as when stepping on the gas, towing a load, or going up a steep hill.

Typically, this will feel like a slight jerk as the engine skips a beat, usually coupled with hesitation in the delivery of power.

You Notice A Decrease In Performance

Another notable sign of a bad or clogged fuel filter is a drop in engine performance. Similar to the last two symptoms, this is usually most noticeable while accelerating, hauling a load, or heading up a steep incline.

This happens because the ECM restricts power to prevent any damage when it notices a lack of fuel being sent to the injectors. While this doesn’t necessarily point to a clogged fuel filter, it does suggest it especially if this symptom matches up with others on this list.

Cost To Replace A Bad Or Clogged Fuel Filter

Thankfully, replacing a fuel filter isn’t too costly, especially if you feel comfortable doing it yourself. Expect to pay between $50 to $150 at a shop or between $15 to $60 for the filter by itself.

While it’s not difficult to replace a fuel filter yourself, it does take a bit of know-how. If you don’t already have the required tools, you might as well just take it to a shop. If you do decide to tackle it at home, be sure to check out the video below for step-by-step instructions.

Nobody enjoys having a car that’s struggling to keep up. Rather than ignore it, tackle it head-on.

If you notice your car is having trouble starting, it’s stalling, or if an engine light appears, have a shop perform a fuel pressure test. You can also use an OBD2 scanner to determine if the issue stems from the fuel system. 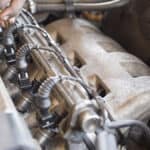 Symptoms Of A Bad Fuel Injector