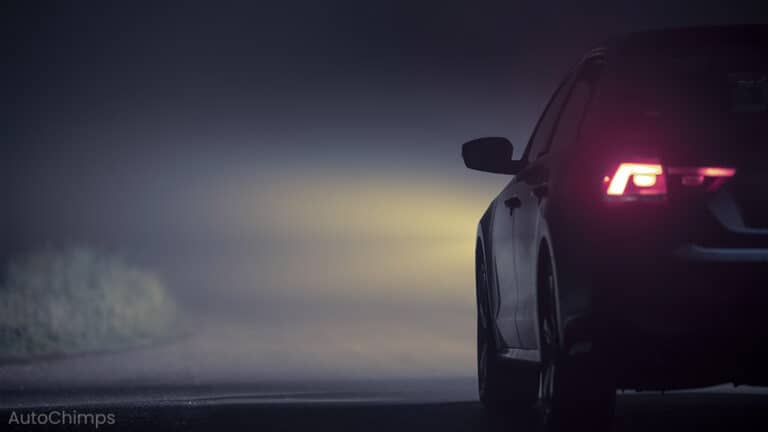 Driving at night (or in otherwise dark conditions) is more dangerous than driving during the day.

You can’t see so well, making it more challenging to adjust to what’s happening or about to happen around you.

Headlights and fog lights are, of course, vital to night driving. But which type should you use? And when?

This guide examines low beam vs. high beam vs. fog lights, explaining when you should use each and what they’re for.

What Are Headlights vs. Fog Lights?

Headlights come in two settings: low beam and high beam. When you turn the headlights on, they’ll automatically set to low beam. You can activate the high beam setting by either pushing or pulling the turn signal stalks (depending on your car).

Don’t confuse the headlights with the sidelights/parking lights. These are the setting before the low beams on the dial/stalk, and they remain on at the same time as the headlights to assist them.

You can use sidelights while driving in the daytime to increase your visibility to other road users. However, their original function was – and still is – to highlight your location when you’re parked on the side of a busy road or in heavy fog.

Sidelights only draw a low wattage (which is why they aren’t very bright), so they are carefully designed to not discharge a battery when left overnight. However, you should switch them off the following day and take your car for a good drive to recharge the battery.

Finally, fog lights. Fog lights are found in a separate unit from the headlights and sidelights. They can legally only be used in thick fog when visibility is less than 100 meters (328 feet). It’s important to remember to switch them on and off whenever appropriate.

When Should I Use Low Beam Headlights?

Low-beam headlights are activated by turning the dial on the dashboard or the turn signal stalk. Different manufacturers put this in other locations, but they’re almost always in one of these locations.

You should use low-beam headlights when you’re driving in the dark in the following conditions:

They’re called “low beam” headlights because they point the light down at the road, providing visibility up to about 300 feet. Older cars or cars with dirty headlights may have much less light range.

Since they point down at the road, low-beam headlights shouldn’t ever blind oncoming traffic or cars ahead of you.

Low-beam headlights illuminate the road and make your presence known to other road users.

Exceptions might apply when you’re going over the crown of a hill or a speed bump. At this point, your car is temporarily angled so the lights could shine straight at another driver. However, this is momentary and unavoidable, so it isn’t considered dangerous.

You might have been surprised to read that low-beam headlights should be used when it’s raining or snowing. It’s actually imperative to do this.

Rain and snow reflect and refract light back at you. If you use your high beams, you’ll get much more reflective glare back in your eyes. It also risks blinding other road users when driving in potentially hazardous conditions.

If you use low-beam lights, in contrast, you will find that your eyes are much more focused on the road ahead and your surroundings instead of the falling rain or snow.

When Should I Use High Beam Headlights?

Your high-beam headlights are activated by pushing or pulling the turn signal stalk, causing the high-beam indicator to pop up on your instrument cluster. The low-beam headlights must already be switched on for the high beams to be activated unless you’re just flashing your lights.

Pulling the stalk to flash your lights temporarily activates the high beams, ensuring whoever you’re communicating with sees your message.

Use your high-beam headlights when you’re driving in the dark and:

High-beam headlights allow you to see much further down the road. You can usually clearly see at least 500 feet.

The danger with high beam headlights comes from blinding other drivers. The lights are incredibly bright, and if another car in front of you (on either side of the road) isn’t prepared for it, you could cause a crash.

Always turn your high-beam headlights off if anyone’s in front of you! This includes oncoming traffic, cars ahead of you in your lane, parked vehicles, and cars turning onto/off your road at a junction.

Some modern cars come with sensors. These automatically switch the high beam on and off whenever it detects the presence of other vehicles. While these systems are great for drivers who regularly forget, they aren’t perfect. In reality, you should be focusing more on manually switching the high beams on and off yourself.

If someone approaches you with their high beams, flash your lights. This should warn them, and they’ll turn them off.

If they don’t and you feel your eyes starting to wince, take your foot off the throttle pedal and look down at the edge of your side of the road. That’s down and to the right if you’re in the States. This means you can still see the road’s direction without being blinded. In severe cases, you might need to stop the car.

When Should I Use Fog Lights?

You should use fog lights when you’re driving in thick fog. They’re designed to drastically increase visibility right in front of your vehicle by illuminating a rectangular area immediately in front of you.

In particular, you should use fog lights to get a clear view of the side of the road, allowing you to drive more safely.

Fog lights are extraordinarily bright and dazzle other drivers even more severely than high beams. It’s easy to forget and leave them on by accident, so you must always be aware.

Use fog lights when:

You must switch your fog lights off as soon as visibility improves. This is enforced by law (depending on where you are), and failure to do so could land you a ticket.

You should only ever use fog lights in the most severe of circumstances. Most of us won’t ever need to switch them on more than a couple of times per year, although that depends on your local climate.

Switching them off as soon as you can see better is absolutely vital.

Switching them on is equally important when visibility becomes extremely poor. This is both about helping you see the road and ensuring other cars – in front of and behind you – can see you.

Despite what some people might tell you, fog lights aren’t the same as low-beam headlights. They’re much more dazzling and dangerous in the wrong circumstances.

Fog lights won’t make much difference to your long-distance visibility (hence the confusion) – they’re all about brightly illuminating the road right in front of you.

Knowing the difference between when to use high beams and when to use fog lights is essential.

Use fog lights for severely impaired visibility – something is blocking the light. Use high beams (or low beams, whichever is most appropriate) for low visibility – i.e., when it’s dark.

How Can I Get More Light From My Headlights?

Get more lights from your headlights by using high-quality, bright bulbs. You’ll find different bulbs with varying brightnesses, measured in lumens. Getting the highest one for the best visibility is usually a good idea. However, you’ll need to ensure it’s compatible with your car and won’t dazzle other drivers.

You should also regularly check your bulbs. For this, you’ll need to sit in the car and get a friend to look at all the lights as you switch them on. They can then tell you which (if any) aren’t working.

A mechanic can also use an adjustment tool to ensure your headlights are angled correctly. If they’re too low, you might not be getting enough light. Too high, and they’ll dazzle other road users.

Finally, your headlight covers might be dirty. You could replace them, but it makes much more sense to consider purchasing a headlight cleaning kit. The Turtle Wax kit is widely touted to be the best if you know how to use it.

Spend around half an hour sanding down each headlight for each of the four grades before polishing at the end. Your headlights will be as good as new.

And that’s low beam vs. high beam vs. fog lights! In summary, stick to the following advice:

Low beam headlights – these are for low speeds in busy or residential areas when it starts getting dark, and also tunnels. Basically, these should be your “normal” headlights at night.

High beam headlights – these are for high speeds in rural areas when you need to see further ahead. Remember to switch them off when other cars are in front of you!

Fog lights – these are for when your vision is severely blocked by fog or other similar hazards. 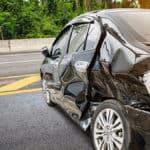 What Is Frame Damage On A Car?