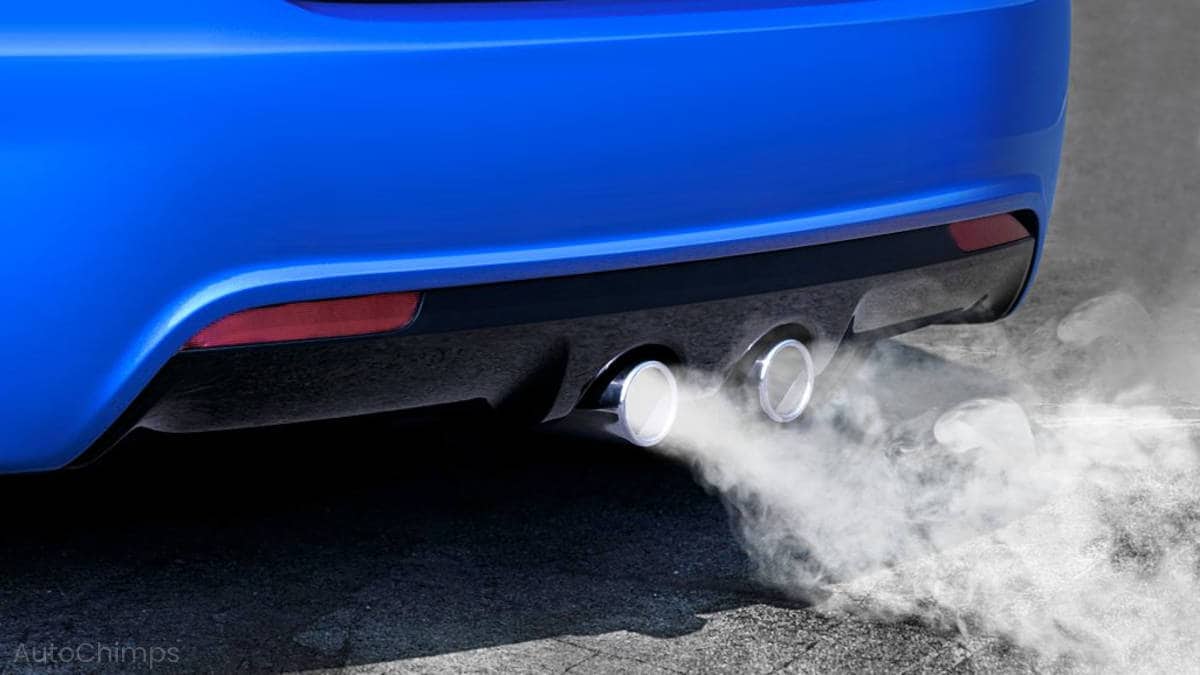 Is it supposed to be that color?

When a car engine is running as it should, you shouldn’t notice anything coming out of the tailpipe.

However, if there’s white smoke coming from the exhaust, there’s likely something that needs your attention.

While the first is totally harmless, the rest can spell disaster if ignored.

Thankfully, in this short guide, we will cover each of the above causes in detail, including how to fix them.

White Smoke Coming From The Exhaust? 6 Possible Causes And How To Fix Them

Cause #1 – Condensation In The Tailpipe

If you wake up one morning, start your car, and it starts blowing white smoke from the exhaust, it’s likely due to condensation.

As the warm/hot exhaust gases meet the cold outside air, steam is a result. While it may look alarming, it is a perfectly normal reaction. Say hello to science in action – impressed?

Depending on how cold it is outside, driving your car for a short time should be all it takes for the white exhaust smoke to lessen.

Sadly, this is the only white exhaust smoke cause on the list that is solved by patience. The rest can lead to serious engine problems if left alone.

Oof, we probably shouldn’t have put this white smoke cause so close to the last one, because when the cylinder head develops a crack, it is no laughing matter.

As you might have guessed, the cylinder head rests on top of the cylinders. It houses both the intake, and exhaust valves, which add the air/fuel mixture to the combustion chamber, and vent what is produced outside.

They are usually made out of either cast-iron or aluminum, the latter being favored due to conducting heat away faster, as well as being lighter.

No matter what yours is made of, if it ends up with a crack, you’ve got a real issue on your hands. One thing that may occur from a cracked cylinder head is exhaust gasses can seep back into the cylinder heads.

When this happens, white smoke is produced, which will exit out the tailpipe.

The most common cause of a cracked cylinder head is engine overheating, which can stem from many different things. Check out this guide for an in-depth look at why your car might overheat.

Ready for some more bad news? In most cases, the only option to permanently take care of a cracked cylinder head is to replace it.

While it’s not all that hard of a job, it does take a bit of time. Add on the cost for parts, and replacing a cracked cylinder head will run between $500-$1000 depending on whether it’s aluminum or cast iron.

The other option you have is to try a store-bought head gasket repair product. Check out this guide for a few of the best ones on the market.

Cause #3 – Injector Pump Timing Is Off (Diesel Specific)

If your engine runs on diesel, the white smoke coming from your exhaust likely stems from an issue with the injector pump timing.

The pump itself is in charge of supplying the cylinders with diesel. If it’s not delivered at precisely the right time, it can lead to an overrun of diesel, which can cause a thick white cloud of smoke to exit the tailpipe.

Other signs of injector pump failure include:

Just because “total failure” was not on the list of symptoms, it doesn’t mean that you should ignore it. Doing so can throw off the entire system, which may eventually lead to the engine not being able to operate at all.

Sadly, resolving this issue is not something we suggest trying at home, as it requires tools and knowledge that only a certified tech would have.

If it is determined that the timing of the injector pump is off, it may be as simple as reprogramming the ECM. If that doesn’t solve the issue, you may have to replace the pump entirely. The other possibility is that you have to replace the camshaft, which can run between $1,500-$3,000.

A fuel injector is basically a spray nozzle that delivers fuel to the combustion chamber. It doesn’t control when or how much fuel gets sent, it just acts to restrict or allow its passage. This system is remarkably precise, meaning even the smallest variation can throw it out of balance.

This is what happens when a fuel injector fails, which, as you might have guessed, can result in your car blowing white smoke out of the exhaust.

Other things you might notice that suggest you have a faulty fuel injector, include:

With a list of issues this long, ignoring a bad fuel injector will quickly become unbearable. Not only that, but it can throw the entire system off balance and cause costly engine repairs.

Why do fuel injectors fail? Contaminants in the fuel, mostly. One way to extend the life of a fuel injector is to routinely replace the fuel filter every 2-years or so, and only fill up at Top-Tier stations.

Once a fuel injector fails, it has reached the end of its life – meaning repairs aren’t possible, so you’ll have to replace it. However, you should always replace the entire set of fuel injectors rather than just replacing a single one. Otherwise, the engine won’t run evenly.

Thankfully, it’s not a complicated process if you have a bit of time one afternoon. Check out this video for a step-by-step guide on how to change a fuel injector.

It’s also possible that your fuel injectors are clogged, which render them effectively useless. The good news is that there are products that exist that can help clear it.

Cause #5 – Oil In The Combustion Chamber

The only thing that should be inside a combustion chamber is air and fuel. If oil ends up in there as well, it will ignite with this mixture, resulting in a thick white cloud of smoke exiting the tailpipe. Other signs include increased oil consumption and engine misfires.

Why would oil be in the combustion chamber? It likely means the piston rings or valve seals are leaking, allowing oil to flow inside.

The reason this is worrisome is that if there’s oil where it shouldn’t be, it means it isn’t where it should be. When the different components of your engine aren’t receiving enough motor oil, it can cause them to fail.

In most cases, you shouldn’t run into an issue with this until after the 100,000-mile mark. One way to help preserve them is to switch to high-mileage motor oil once you have.

Sadly, replacing piston rings is extremely pricey, usually costing between $1,800-$3,500 for both parts and labor. The parts only run about $75-$200, making it a very time-consuming job. Replacing valve seals costs a little less, but it still can reach as high as $2,000.

Can you replace valve seals or piston rings by yourself?

If you’re comfortable dismantling an engine, then you can save yourself a lot of money. However, whether or not you’re skilled enough to do so is another story.

And then there’s this one – a cracked engine block. While ignoring the previous cause can eventually lead to a worst-case scenario, finding out you have a crack in your engine block IS that scenario.

The engine block is the primary structure that every other component is built around.

Thankfully, most engine blocks are made out of either cast-iron or aluminum alloy. Meaning they are not only durable but are great for transferring heat away from the engine as well. However, if any of the engine components aren’t working as they should, the block can overheat, which weakens it.

A few common symptoms that the block may be getting too hot, include:

The reason a cracked engine block can cause white smoke to blow out your exhaust is due to oil leaking into the combustion chamber. When this happens, it mixes with the air/fuel mixture and ignites. The white smoke created will then get sucked out and exit through the tailpipe.

Ignoring a cracked engine block is not an option. The engine can’t maintain proper compression if it’s seeping out, so performance will significantly drop. Not only that, but the longer it’s left alone, the more likely it is to cause further damage.

There are three possible methods for repairing a cracked engine block, re-welding it, cold-metal stitching it, or using a cold-metal patch. Each works just as it sounds, by either welding the crack, stitching it shut, or patching it.

Regardless of which one you have a professional perform – it is not cheap. At the end of the day, don’t be surprised if you end up spending between $2,500-$4,000 for a temporary fix.

We Hope It’s Due To Condensation

But if it’s not, don’t mess around, because it will eventually cost you a lot of money if left untreated.

One way to ensure your car lasts as long as possible is to take good care of it. Check out our previous article for 15 essential car maintenance tips to will give yours a fighting chance. 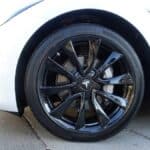