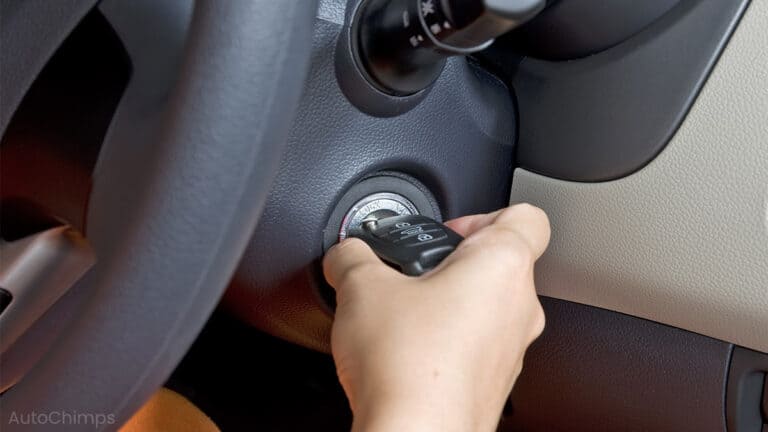 A steering wheel lock’s primary function is to deter would-be car thieves. It’s not the most effective system in the world, but it’s an added layer of security.

If your steering won’t lock, it makes your car easier to steal. Not that somebody would know that from the outside, of course!

You might notice that your steering wheel won’t lock, and the car won’t start. One would expect these two issues to be completely unrelated.

That’s because the steering wheel lock on standard bladed-key cars is mechanical. The mechanism is only connected to the starting system in that they share the input from the ignition cylinder.

If you have a keyless entry (or a key-in-dashboard) model, there could be an electrical problem.

In this comprehensive guide, I will describe what these combined issues are caused by in great detail. However, in the end, remember that they’re likely to be two separate faults.

What Is A Steering Wheel Lock?

A steering wheel lock is an anti-theft device. It locks the steering in place, making the wheel impossible to turn.

The steering wheel lock only clicks in when someone tries to turn it without first inserting the key in the ignition.

It should release once you put the key in and wiggle the steering wheel.

It’s a good job they exist, as cars (especially those with manual transmissions) would be oh-so-easy to steal.

Without the steering lock, all a car thief would have to do is smash a window, put the transmission in Neutral, release the handbrake, and push it away. Not ideal.

How Does The Steering Wheel Lock Work?

Ah, well, it’s not quite as simple as that.

Manufacturers design their own steering wheel lock systems. They don’t then display the systematics and designs to the public; that would make them utterly futile features.

As a general rule, the lock mechanism is connected to the ignition cylinder.

Since your key is the only one that can enter the cylinder and turn, there should be no way around the lock.

As a result, if the symptoms are related, this is probably the root cause. It’s very unlikely, though.

If you have a push button start (or key-in-dashboard), the lock mechanism is either electronic or nonexistent. This makes the problem more likely to rest with an electrical component or the battery.

Many of these vehicles have electronic power steering. When these systems turn off (with the engine), the steering wheel locks electromagnetically.

Why Won’t My Steering Wheel Lock?

The steering wheel should lock if you wiggle it when the key isn’t in the ignition. You might have to put more effort into some cars than others.

Note that the list below details possible causes of a steering wheel that won’t lock. They don’t all mean your engine won’t start as well! See the next section for that.

If the wheel won’t lock and you have a standard blade key, the issue could lie with any of the following:

Push-button and key-in-dash starting methods could be caused by the following:

Before condemning your vehicle and taking it to a shop, ensure it’s nothing minor. Some new cars don’t even come with a steering wheel lock.

For instance, new GM full-size SUVs don’t have them. That’s primarily due to the worldwide computer chip shortage. It’s a non-essential system they can afford to cast aside.

If your car has one, perhaps you weren’t jiggling the steering wheel with enough force to make it lock.

Sit in the driver’s seat and turn the steering wheel as far as you can in either direction. It shouldn’t get more than 30 degrees. If you’re still rotating it at 90 degrees, there’s definitely a deeper problem.

Most of the causes for a steering wheel not locking mentioned above could also stop your car from starting.

Note: The non-locking steering wheel could be a coincidence if your engine turns over. Consider having the two issues inspected as separate problems.

The ignition cylinder is the only realistic cause of this problem, even if it’s unlikely. That is, provided the two symptoms are connected.

The ignition cylinder is what you put your car key into. If this seizes up or breaks, you won’t be able to turn it. This could mean the steering lock mechanism can’t activate.

The telling sign of a bad ignition cylinder is that your key won’t turn and might be stuck. You’ll also likely have experienced difficulty inserting the key over the previous weeks.

This is by far the most likely root cause. However, you’d usually expect the wheel to get stuck locked, not unlocked.

With these systems, there’s no way mechanical to engage or disengage a steering lock. Thus, they’ll be driven electronically.

Note that some new cars have no steering lock at all. Instead, they have electronic power steering (EPS). When the vehicle switches off, the mechanisms lock in place, acting as a steering wheel lock.

The electronic power steering is a motor attached to the steering column. It assists your driving by inputting extra effort when you turn the wheel.

When you turn the engine off, the EPS should lock up. It’ll be impossible to turn the steering wheel.

If there’s a parasitic drain connected to the electronic power steering, it might stay activated even when your car is off. This could drain the battery (preventing starting) and mean the steering doesn’t lock.

If your keyless entry car has a steering wheel lock, it’ll be electronically actuated. That is, the battery turns it on and off.

If the battery is low on charge, it might not be able to engage the steering lock.

For this to happen, the battery must be low on charge at the end of your journey when you turn the engine off. This would imply there’s a failing alternator.

You should see other warning signs, such as the battery warning light. Your engine might even stall while driving (which is dangerous!).

The electrical system of cars nowadays is increasingly complicated. Everything is interconnected and designed by experts.

Any number of deeper electrical issues could be at play.

For example, the battery terminals could have weak connections, or a circuit connected to the power switch may have a loose wire. Severe ECU glitches might also come into play.

Thankfully, faults as serious and difficult-to-find as these are rare.

How Do You Fix It When The Steering Wheel Won’t Lock & The Car Won’t Start?

How do you fix it? You go to an automotive locksmith.

That might not be the answer you’re looking for, but in most cases, it’s the unavoidable reality.

These mechanisms are too in-depth and specialist for anyone to work on at home. This guide is an attempt to show the complexity involved with these systems and symptoms.

If you know how the detent works or how to inspect the EPS, it’s a different story. But then, if you’re reading this article, you probably don’t (no offense!).

You’ll need a tow (on a flatbed) to a nearby trusted shop. These repair jobs are even best left to specialist mechanics. Fitters and technicians might not know how to access the detent. Ideally, you should look for an auto locksmith or an auto electrician.

It might be expensive, but your car will work again.

In the end, if your steering wheel won’t lock, buy a bar-style one. As long as your car starts and runs fine, this isn’t the end of the world. 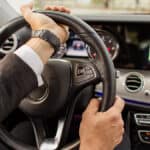 Is Your Steering Wheel Making Noise When Turning? Here Are Reasons