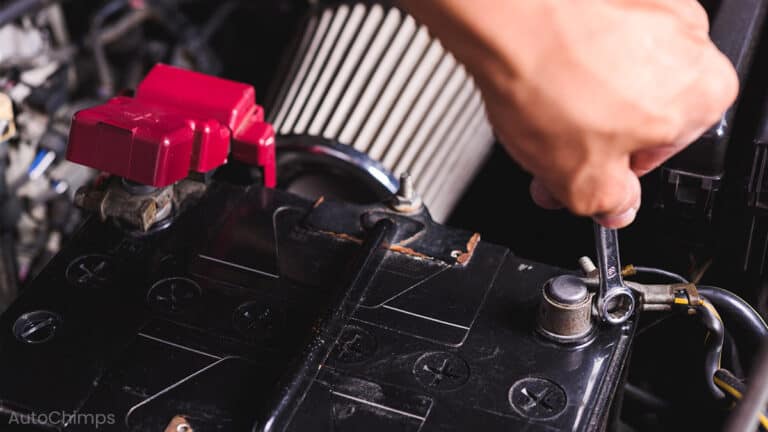 Do you suspect your car or truck has a loose battery cable? This could impact the entire electrical system, especially the starting equipment.

Because of this (unless the cables are obviously hanging off), the list of potential symptoms is almost endless.

In this comprehensive guide, I will walk you through the main symptoms of loose battery cables, including:

Here are some of the most obvious symptoms of loose battery terminal connections.

The first and most obvious sign of a loose battery cable is, well, you can see it.

Electrical cables connect to the two battery terminals. They should sit tight. If you can pull one of the cables off with a quick tug, it’s loose.

Similarly, you shouldn’t be able to wiggle the connections free. They should be gripping the positive or negative terminals with significant force.

In almost all situations, you should be able to tighten up the clamp bolts. The tighter they are, the more secure the battery cables will be.

Although the battery is a vital electrical system component, its primary responsibility is to power the starter motor.

The only available supply current is the battery when your car is switched off, once it starts and runs on fuel, the alternator kicks in.

Loose battery cables interrupt the current flow when you turn your key in the ignition. They also mean the alternator can’t fully recharge the cells when the engine’s running.

As a result, a loose car battery connection is likely to result in your car struggling to start.

Note: this symptom could also be caused by any number of things. Check out this article for an in-depth explanation.

Car Won’t Start At All

Your car will almost certainly struggle to start. But it could also fail altogether.

You’ll most likely still hear some evidence of an attempted start. For example, the engine might turn over slowly but not fast enough to start. You might even hear only a click.

If you don’t hear anything – not even a clicking sound – the battery is completely discharged. This is also possible with loose battery terminals, but less likely.

Note: the most likely reason for a car that won’t start is a problem with the battery or alternator, as opposed to loose connections.

You should keep a particularly close eye on any electrical circuits designed to function while the engine is off. These are:

Almost all cars on the road today have an alarm and central locking. Watch out for the alarm blaring at random times or the central locking playing up.

These could happen because of an intermittent current flow from the battery due to loose cables. These could lead to the appliances malfunctioning.

Note: erratic appliance behavior could also be caused by a deeper ECU module glitch or damage. The systems or battery itself could also be not working properly.

The battery warning light is a clear and conspicuous sign of an electrical problem. This might be accompanied by the Check Engine light because a low current could lead to misfires and sensor issues.

Note: a Check Engine light could turn on for any reason related to the engine. The battery warning light could also mean you have an alternator or battery problem.

Drop In Power/Limp Mode While Driving

A drop in power while driving could be due to an electrical fault. You’d expect to see the battery warning light on the instrument cluster.

This could happen if your battery connections are so loose that they start coming off. Keep your terminals from reaching this state if at all possible. This is a hazardous situation since, in extreme cases, you might lose all engine power.

Note: there are many potential reasons for limp mode or low power. These include misfires, other electrical problems, transmission issues, etc.

You might notice electrical appliances playing up. These could include anything on the 12-Volt circuit, such as:

Turning any electrical appliances on while your engine is off is usually a no-no. It can damage your battery and wear it out prematurely.

In these circumstances, though, it’s worth testing with the engine off. That way, the appliance is only drawing from the battery. Thus, you can see if the battery’s output is lower than usual.

Test the headlights since it’s easy to see if they’re low on power. They will shine less brightly than usual if so.

Note: this could be caused by loose battery terminals. However, it’s more likely to be an old or damaged battery at fault.

First of all, the cable clamps might have come loose. You may need to replace the nut and bolt or the clamp as a whole.

Any of these components could be rusting away.

Always get a mechanic or automotive electrician to replace the clamps connecting to your battery. Getting this wrong could lead to an electrical overload.

Corrosion is the other main problem leading to loose battery cables. As rust builds up, it eats away at the metal surfaces and creates a barrier, interfering with the connection. It’s also not a conductor, which will further inhibit the current flow.

This corrosion is usually more severe on the terminals. You might find rust on the cable connections, but this is generally negligible.

You could also have a badly damaged battery or too much grease on the terminals. These are less likely than the two options mentioned above.

Will A Loose Battery Cable Kill The Battery?

Loose cables don’t directly drain the battery – but they can create circumstances that lead to it.

Current can’t ‘escape’ through the cable, even if it has a loose connection.

However, it could cause other issues. The loose connections mean the alternator isn’t charging the battery correctly. Thus it can lead to a discharged battery.

In rare cases, the intermittent current might create a glitch in a system. This might lead to a parasitic drain.

How To Fix A Loose Car Battery Connection

Tightening up the clamps is a straightforward job. You’ll need a correctly-sized socket or spanner.

Turn the clamp’s bolt clockwise (righty-tighty) until it’s as tight as possible. Repeat this for the other terminal.

Don’t let the metal spanner or ratchet touch both terminals at the same time! This will create a dangerous short circuit and could hurt you and your car.

If this doesn’t fix your problem, the best option is to take your car to a professional. They can clean the terminals and clamps for you. This prevents any mistakes that could harm you or your vehicle.

The price will depend on what exactly needs doing. Many mechanics might simply fit a new battery and clean the clamps. This often makes all the problems go away.

If you find a lot of rust at play, you should instead go to a mechanic. If you’re confident and aware of the risks, it’s possible to clean the terminals yourself.

Fixing any problem sooner rather than later is beneficial in the long run. It prevents further damage and, thus, has less impact on your wallet. 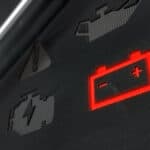 Car Battery Light Comes On While Driving? Here’s Why And What To Do