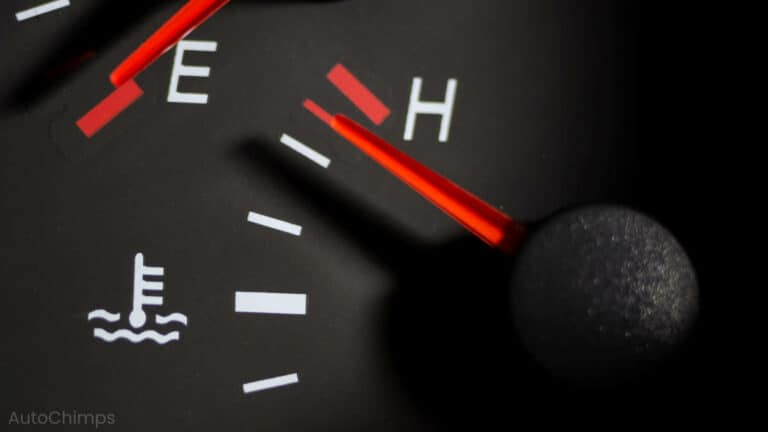 So, your temperature gauge goes up and down while driving – is there anything wrong with your car?

Before digging further into this guide, know that a small amount of fluctuation is normal. While driving, the engine is always regulating its temperature. It uses the thermostat and coolant system to do this.

As such, you shouldn’t worry about small, temporary changes (not more than 5 degrees Celsius or 10 degrees Fahrenheit). The temperature should reset to its “normal” level as soon as the engine has an opportunity to cool down.

But does your engine temperature gauge go up and down constantly while driving? If so, it’s a sign of something a little deeper at play.

This guide explains what might be going on. Always remember that there’s no substitute for an experienced mechanic’s detailed inspection.

What Is The Engine Temperature Gauge?

On your dashboard, you’ll find the engine temperature gauge. It’ll be one of the smaller dials. It has a needle pointing towards the colder side when the engine is off or only recently switched on. As the motor warms up, the needle will move to somewhere central on the gauge.

This should be the standard operating temperature. Actually, it’s the coolant’s temperature. It removes heat from the engine, dissipating it into the atmosphere via the radiator.

It’s this needle that will fluctuate. You should always watch this while driving. Rising temperatures are often the first sign of many developing problems.

The temperature gauge sensor is usually located somewhere near the thermostat. Every manufacturer designs its engines differently, though. You may need to look around or make the most of online resources.

It sends an electrical signal to the ECU, changing the needle’s reading on the dashboard gauge.

How Does A Car’s Coolant System Work?

The coolant in a car is made up of antifreeze – a chemical compound to lower the freezing point and protect the system from corrosion and mineral build-up – and water. It’s stored in the coolant reservoir/expansion tank, which you’ll find under the hood.

When you turn the engine on, the water pump is activated. It forces the coolant through a series of pipes, hoses, and channels in the block and head.

Once a pre-determined temperature has been reached, the thermostat opens. It’s a valve made with a synthetic wax. This wax melts when it’s hot enough, opening the new channel. Once the engine cools down, this wax rebonds. This keeps the thermostat closed the next time you start the car from cold.

The coolant is diverted through the heat exchanger (known to most people as the radiator). It passes through narrow, honeycomb-like channels, where a clever series of small fins transfer the heat to the air passing across it.

If this heat transfer isn’t enough to regulate the engine temperature, the fan will activate. It draws much more air across the radiator.

The coolant returns from the radiator to the expansion tank with the thermal energy dissipated into the air. This continuous cycle is always happening. It ensures your engine doesn’t get damaged by too high (or too low) temperatures.

If your car’s temperature gauge is fluctuating – that is, it’s going up and down repeatedly – you have an interesting problem. Identifying it requires a little mechanical know-how. Ensure you’re familiar with how the coolant system works to understand when and why it’s happening.

A temperature gauge moving up and down is most likely to indicate a coolant system component that’s in the process of failing but hasn’t failed yet. It’s not bad enough for the Check Engine light to illuminate. Neither is it causing the engine heat to spiral completely out of control.

Thus, it’s safe to assume that the part – whatever it is – is working some of the time but not at others.

Here are a few of the more likely culprits.

Of course, the first thing you should do is check your coolant levels. Your engine might struggle to regulate the temperature under heavy loads if they’re slightly low. When you come back to easier driving, it manages to recover.

If you find that the coolant levels have dropped just below the indicated mark on the reservoir, top it up. The engine must be cold, so you don’t scald yourself when removing the cap.

Make sure you use the right type and bring it up to the recommended range. You’ll find this information in the owner’s manual. It isn’t necessary to fill it all the way to the maximum line. However, this can be a good indicator for when you come to recheck it.

Remember, though, that the coolant has gone somewhere. There’s nothing to worry about if it’s just a one-off top-up as part of regular maintenance. But if the levels have gone down again the next time you check it, there could be a leak. This could be through a hose, seal, gasket, or radiator.

Topping up your coolant levels might stop the problem of a fluctuating temperature gauge. Equally, it might not. Take your car for a rigorous drive (high acceleration, fast speeds, and steep hills) to see if you’ve fixed it. If not, move on to step two.

Note: slightly low coolant could cause this. However, with deficient coolant levels your engine is more likely to overheat completely. This is dangerous and must be fixed immediately.

If topping up your coolant didn’t work, it’s worth getting a mechanic involved around this point. A breaking thermostat isn’t that common, although the average car is likely to need one or two throughout its lifespan.

The thermostat regulates the coolant flow to the radiator. If the thermostat is only partially working, it might close or open at the wrong times or even sporadically.

With the thermostat closed, the engine temperature will spike. This happens since the coolant isn’t going to the radiator and thus isn’t actually cooling down. You’ll see the needle drop when it’s open as normal operations resume.

A mechanic might remove your thermostat to inspect it. They might also use an old trick. Removing the radiator filler cap will show whether the coolant is flowing. When the engine’s cold, it shouldn’t be, and vice versa. If they notice coolant intermittently flowing, they’ll have identified the problem. It’s a failing thermostat.

Thankfully, this is a simple job. Including labor, it shouldn’t come to more than $100.

If the sensor reading the temperature somewhere around the thermostat, stops working correctly, it’ll be sending inaccurate information to the gauge. The gauge will then display this through an up-and-down-shifting needle.

The coolant temperature and engine itself may actually be fine. If the problem’s the CTS, expect to pay around $200 or less (including labor).

At the other end of the electrical circuit, the gauge may also be malfunctioning. The needle shifts position depending on the electrical resistance in the wiring. If there’s a developing problem with the connections or the gauge itself, it might only display temperatures some of the time.

This would cause the needle to move up and down. If the gauge has broken, you’d expect the maximum reading it reaches to be the correct coolant temperature.

Since a broken temperature gauge is very unusual, providing a cost estimate is tricky. Most shops will have to inspect your car and learn more about its wiring systems before giving you a quote. Expect to pay a minimum of a few hundred dollars, almost all of which will be in labor rates. You might also need an automotive electrician specialist.

The radiator fan cools the coolant as it passes down or across the radiator. It isn’t always on but activates when the temperatures start spiking. They rise in situations like accelerating hard or driving uphill in a low gear.

If the radiator fan isn’t activating at the correct times (or at all), the coolant temperature will rise when the engine’s under heavy loads. You might then find that it slowly drops back down to normal when you’re back on flat roads at slower speeds.

Likewise, if the fan is always on, it might be cooling the coolant too much. This would make the temperature drop, forcing the thermostat and ECU to work harder to bring it back up. Thus, the temperature gauge will go up and down.

The problem probably doesn’t rest with the fan itself and is more likely to stem from the wiring or ECU (see below) or other sensors, such as the CTS. A mechanic may also check the fan relay. Expect to pay around $200 to $300, although this could vary.

The Electronic Control Unit (ECU) receives information from sensors (of which, in a car, there are many). It then translates this into action. In the coolant system, it receives readings from the coolant temperature sensor (CTS) – among many others – and transfers these to the gauge’s circuit.

If the ECU develops an issue, it could misinterpret the information from the sensor or send out inaccurate data to the gauge. Either way, the needle will show the wrong coolant temperature.

If the fault is still developing, the gauge may go up and down rather than display the wrong reading.

Unfortunately, ECU reprogramming can be extremely costly. If you’re unlucky, it could slip into the $1,000s. But, if you intend to keep the car, it’s necessary to fix it as soon as possible. Otherwise, it could develop into anything more harmful and more expensive.

Temperature Gauge Goes Up And Down While Driving – Conclusion

If the temperature gauge fluctuates when accelerating, driving quickly, or heading uphill, the problem could be the radiator fan, thermostat, ECU, or a coolant leak.

If it happens more randomly, such as when idling, when you’ve just switched the car on, or when driving slowly over flat ground, you should first investigate the CTS, ECU, and other circuitry. Again, check the coolant levels for any leaks.

Although the temperature gauge going up and down while driving might be unsettling, it should be a reasonably cheap fix. As usual, some diagnosis work is required.

First, check your coolant levels and, if necessary, top them up. Take your car to a professional for diagnosis if that doesn’t solve your problem. Travel as slowly and safely as you can to protect the engine, even if you suspect the issue is only with the CTS.

It’s better to be safe than sorry! 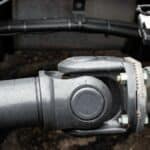