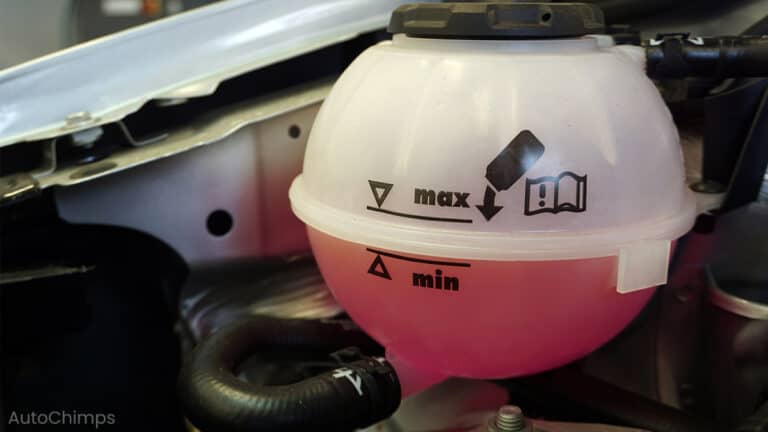 Coolant is crucial to keep on top of. Without it, your engine will start to overheat and eventually seize.

If you’re facing coolant loss, you might wonder if the liquid has simply evaporated.

The quick answer? It’s possible, yes, but the bigger problem is, if so, where’s the leak?

Coolant can’t evaporate unless air is present. Since the coolant system is closed, there’s no notable amount of air.

The water/antifreeze mixture can’t just evaporate into nothing.

In this guide, I will explain why coolant shouldn’t evaporate in your engine. You will then know what to say to a mechanic if you need to head to a shop.

What Is Engine Coolant?

Engine coolant is a mix of water (ideally de-ionized) and antifreeze.

Driven by a water pump, this mixture passes through a series of pipes and channels. As the cool liquid rushes past the hot metal surfaces, it absorbs the heat.

A thermostat opens when the engine is up to its running temperature. This opens the channel to the cooling radiator.

At this point, it then flows through the radiator and passes through the core. Here, the large surface area means air passing across it dissipates this heat into the atmosphere.

The cooled liquid then returns to the expansion tank. The process continues until you switch your car off.

You must keep an eye on your coolant levels. It’s reasonable to check the expansion tank every month or two.

If you notice low coolant levels, the liquid must have gone somewhere. Although evaporation might play a small part, it’s implausible to be the root of the problem.

Note: as well as looking at the level, you must check it’s in good condition. You’ll need a whole system flush if it’s dirty, brown, or soupy.

Does Coolant (Water And Antifreeze) Evaporate?

Coolant is (approximately) 50:50, water and antifreeze. The precise amounts needed for your engine will be found in your owner’s manual.

Water – obviously – evaporates. You see this every time you boil the kettle or a pan. However, it doesn’t need to be 212 degrees F (100 degrees C).

As you approach its boiling point, more will evaporate.

Antifreeze is usually ethylene glycol with a series of additives mixed in. It has a much higher boiling point (387 degrees F/197 degrees C).

When antifreeze boils (a temperature your engine should never reach!), it leaves behind crystal-like substances.

Small amounts may evaporate if you leave the bottle cap off for some time. However, this should be negligible. Also, you should never leave it open. Ingesting even a small amount could be fatal to children, animals, and even adults.

Once combined in your engine, the radiator cap and reservoir cap seal the coolant in the system. Theoretically, there should be no leaks.

This is known as a closed system. The contents never leave (again, in theory).

For evaporation to occur, air must be present. The droplets are absorbed by the atmosphere and thus removed from the main liquid body.

Within the closed coolant system, there is nowhere else for the water to go. Although a small amount of air may be present, it’s negligible.

Evaporation can also only occur at the surface of a liquid. As the water is pumped through the system, the surface in contact with air is as good as nothing (if existent at all).

Once the air reaches 100% humidity, it can’t absorb anymore.

Thus, a minuscule amount of water may evaporate when the engine is on. But you could probably count the droplet losses on one hand.

But even if this were to happen, and an inconsequential drop of water evaporates, where would it go? Even in a semi-gaseous form, it can’t escape the system.

Before long, any evaporated water droplets will encounter a cool surface (such as the radiator) and recondense.

Thus, even though evaporation is negligible but may technically occur, your overall coolant levels should never drop.

Will Coolant Evaporate If There’s A Leak?

If there’s a leak, it’s a different story. Now, there’s somewhere for the coolant to go if it evaporates.

Evaporation still needs airflow. Only the most significant tears or warps could bring enough air in to absorb a noticeable water quantity.

However, imagine you had a leak of this size. It’s far more likely to result in drips from the liquid rather than evaporation. You’ll lose much more coolant this way, too.

In short, it is technically possible for coolant to evaporate if the system has a leak. It will most likely be a negligible amount, though.

The bigger problem is losing the coolant liquid itself.

Does Coolant Evaporate In Hot Weather?

The water contained in the coolant may be slightly more likely to evaporate in warmer temperatures.

Remember, though, that a hot day isn’t a substantial temperature change in relation to your engine.

Leaving water or coolant in an open-topped bottle may make it evaporate faster. It’s the airflow that makes the real difference, though.

You shouldn’t see any significant change in coolant levels based on the season. If you notice a problem in your engine, it’s probably caused by something else.

How Much Coolant Loss Is Normal?

Under normal circumstances, coolant loss should be almost nothing. You might need to top it up every year.

Most manufacturers recommend a coolant flush every five or ten years. Check your owner’s manual and service booklet for more information.

If your levels are low or the coolant is contaminated, you have a problem. If not, well done for checking, and carry on as you were.

Why Are My Coolant Levels Low?

The coolant must be going somewhere. That much is clear.

If it’s disappeared, there is a leak somewhere. It might be in the engine or external.

There’s another possibility, though.

Hot substances expand due to increased internal kinetic (thermal) energy. This is a law of physics and applies to everything.

Coolant is no exception, even if it is a mixture of water and antifreeze.

When you top your coolant reservoir up, you’ll notice the MAX and MIN levels. These are usually based on a cold engine and cold coolant. Your owner’s manual will tell you exactly how to do this.

If you’re looking at your coolant levels at the wrong time, there may appear to be a problem when there isn’t one.

Having said that, the difference in levels shouldn’t be too significant. If you can’t see any in the expansion tank, it’s more than just down to temperature change. There’s a leak at play.

How To Check For An External Coolant Leak

The first thing to do is to use your owner’s manual to top the coolant up. Ensure you do it at the correct temperature (hot or cold) and use the right type.

Monitor the levels over the next day or two. If they go down again, there’s a leak!

The best way to check for an external leak is through a visual examination. Old school, perhaps, but they’re often fairly obvious.

Check around the rubber hoses, seals, and metal clamps. If there is an external link, you’ll probably find it somewhere around here.

You should also look underneath the engine bay for any evidence of water under your car. The engine should have been running for a little while first.

For a more thorough check, consider a UV dye. You can buy these from most good parts stores.

Put it into your system and give it a few minutes to circulate. The engine needs to be switched on for this.

Next, use a black light to look for any leaks.

How To Check For An Internal Coolant Leak

If you can’t find an external leak, the problem may be internal. This means the engine is burning the coolant, leaving no evidence of a leak.

The main problem areas are gaskets, although there could also be a crack in a channel wall.

If the chambers are burning notable amounts of coolant, you might notice the following symptoms:

Usually, the problem rests with a blown head gasket. If this is the case, you might notice oil in the coolant (or vice versa).

These jobs are in-depth and nigh-on impossible to do at home. Save yourself a whole lot of hassle and go to a mechanic for a proper diagnosis.

So, Does Coolant Evaporate?

Here’s the simplest way to explain it.

If your engine has suffered coolant loss, it’s probably (unfortunately) a generic leak. It’s best to take your vehicle straight to a mechanic.

The longer you leave it, the more damage might be done. 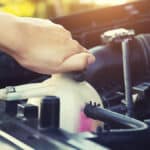 Losing Coolant But No Leak? Here’s Why And How To Fix