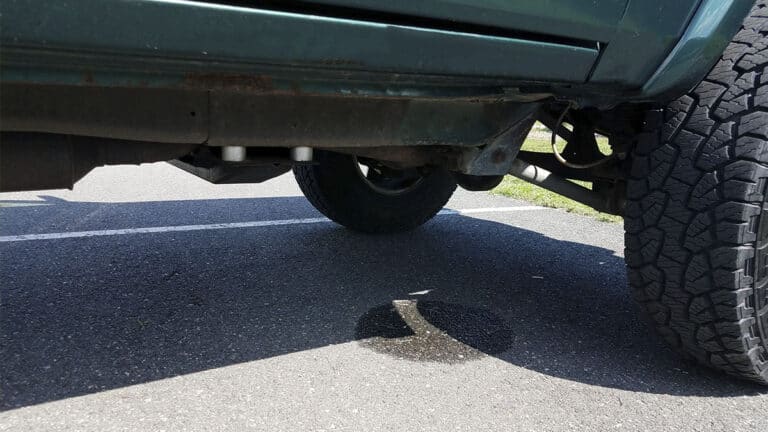 Is water leaking from underneath your car? There’s not necessarily any need to panic. Perhaps you’ve just returned to the parking lot after a shopping trip, or your car’s sitting and running.

There are many potential causes for water dripping from underneath your car. Most of them are either nothing to worry about or a very simple fix.

On occasion, though, you’ll need to pay a little more money or take the car to a trusted local mechanic for further investigation.

Here’s why water is dripping and puddling beneath your car.

Is It A Water Leak Under Your Car? Or Something Else?

The first thing you need to establish is whether the fluid you can see puddling underneath your car is actually water at all. It could also be windshield washer fluid, brake fluid, or fuel.

Even motor oil and transmission fluid could look like water in the shadow underneath a car.

Before moving your car, try to get a good idea of where the liquid comes from. Is it the front or the back? Near a particular side or directly in the center?

The next thing you should do, if possible, is moving your car for a closer look at the liquid. You’ll probably be able to see whether it’s water (or water plus an additive) or something else.

What Is The Water Dripping From The Bottom Of Your Car?

Here are several things that could lead to water leaking from the bottom of your car.

Nothing To Worry About – Normal Operations

Not Serious, But Get Fixed As Soon As Possible

Why Is My Car Leaking Water Underneath? Explained

Rainwater Puddling And Other Collected Water

Your car is an engineering masterpiece of hundreds of different components. The metal chassis is carefully constructed to house and hold each of them, meaning there are often plenty of places where a small amount of water can pool.

Most rainwater drains straight through the bottom of your windshield and down to the road. However, some could pool in certain areas around the edges. Car washes could also result in puddling water.

Liquid can quickly gather in certain areas when you drive through puddles or on water-soaked roads. It could be splashed around and unsettled by something as simple as braking hard when you park up.

This is nothing to worry about. As long as your dashboard has no warning lights and the car feels normal, you’ll be fine to carry on as usual.

Watch the above video for a quick introduction to how the air conditioning system works.

In short, the secondary job of the air conditioning system is to dehumidify the air. That is, it removes moisture from it. That’s why the air feels so crisp and cold.

But where does that humidity go? It’s simply sent out of the vehicle through a small pipe, probably somewhere near your engine. This results in your car dripping water underneath.

So, is it a hot day? Is your air conditioning on and turned up to the maximum? What happens if you switch it off? Is the problem fixed?

Water vapor from the engine’s exhaust fumes and the surrounding air condenses in the pipe whenever you turn your engine off. The metal’s not so hot anymore, meaning it turns into water droplets instead of gas.

As this water settles, it begins to pool, especially in lower-lying areas like the muffler. When you turn the car back on, you may notice water dripping – and sometimes streaming – from the tailpipe.

It can also happen when your car has been idling for a long time. Water builds up in the exhaust pipe because there isn’t enough heat or pressure to force it all the way through.

Again, it’s completely normal to see water dripping from your exhaust’s tailpipe. Take your car for a reasonably long drive, keeping the engine at relatively high revs. This functions to warm the pipe up, evaporating the water while simultaneously sending more exhaust gases to force the vapors down and out.

Certain areas of cars are prone to flooding, either from water dripping down or splashing up. Some notable parts to watch out for are:

If any of these leak through a hole of some kind, it’ll make a puddle underneath your car when it’s parked up. Of course, it’ll also be leaking while you’re driving, but you won’t notice.

The telltale sign of an interior flood is the smell of dampness. Your car’s cabin will smell moldy and wet. Follow your nose to the source.

You’ll have fixed your problem by plugging this hole after stopping the area from flooding again (whatever that entails).

If there’s a leak allowing water into the door, the door will feel heavy. You’ll even hear and feel the liquid sloshing around when you close it or drive over bumps.

Okay, at this point, this article is moving away from purely water-based liquids, which has been focused on so far.

Your windshield washer fluid, otherwise known as wiper fluid or screenwash, contains a detergent and several other additives, including antifreeze. You can find it in a pre-mixed or a concentrate formula (when you’ll have to add the water yourself).

In winter, it’s recommended to use approximately a 1:1 ratio of water to washer fluid. However, in summer, you can get away with 10:1 – much more water than washer fluid. This is because there’s no risk of it freezing.

The fluid is stored in the windshield washer fluid reservoir. These days, this is a molded plastic container usually capable of holding around 3 liters of liquid.

This plastic reservoir can crack, leading to a “water” leak under your car. It’ll have a blue overtone in most cases. You’ll need to replace the bottle to fix the issue.

Like washer fluid, coolant is also typically made up of about a 1:1 ratio of water to antifreeze. However, if there’s a coolant leak, it’s a much more severe issue.

Your engine depends entirely on the coolant system operating correctly. This removes heat, stopping it from overheating, and keeping it at a stable running temperature. Without it, it would crack and seize.

If you have a coolant leak, your engine will start overheating. Did you notice your temperature gauge going up while you were driving?

The liquid should also have a colored overtone. Does the color of the fluid on the ground match what you have in your expansion tank under the hood? While looking at that bottle, is the level below the MIN mark? Or has it dropped significantly since you last looked?

If there’s a leak in the coolant system, it’s probably in either the expansion tank, the radiator, or one of the hoses. Thankfully, these are generally reasonably easy to replace, although you need a complete coolant flush.

We now move into the section, briefly touching on a few fluids that aren’t water but could be mistaken for it as you look underneath your car.

Fuel – gas or diesel – is the lifeblood of your car and its engine. It combines with oxygen before being ignited by the spark plug, creating the power sent to the wheels.

If you have a fuel leak, not enough is reaching the engine. Your car will feel low on power and struggle to start.

It’ll also smell heavily of gas. You’ll recognize the odor from a gas station or an old or two-stroke engine.

Oh, and needless to say, gasoline (in particular) is highly flammable. Don’t look underneath your car with a lighter or another naked flame. It will catch fire.

Power steering fluid doesn’t feature on every car these days since most now use electric power steering.

However, if your car has it, you’ll see a bottle under the bonnet with a steering wheel icon on the cap. This is the power steering fluid reservoir. You’ll note that it contains a red liquid.

If the power steering fluid leaks, the fluid underneath your vehicle will also be red. You’ll most notably find the steering wheel difficult to turn in slow-moving conditions.

This isn’t the most serious immediate problem, but it could become serious in the wrong circumstances. Therefore, you’ll need to get it repaired as soon as possible.

Brakes are hydraulic systems filled with brake fluid (DOT 3, DOT 4, or DOT 5). If there’s a leak, two of your brakes won’t work properly. These two are always at the opposite corners (for example, the front right and rear left), so you’ll still have some stopping power.

However, the pedal is likely to feel light and like it’s sinking much further than it usually does. You’ll also notice the car not slowing down so efficiently.

Brake fluid is somewhere between light yellow and brown, depending on the exact type and its age and condition. The leak could come from anywhere in the system but most commonly happens at the calipers or drums. Is the puddle anywhere near a wheel? Or can you see the brake line above it?

If you suspect a brake fault, take it immediately to a shop, driving carefully and slowly. You’ll need a brake fluid flush and a new component to replace the faulty one.

Engine oil can leak from several locations, such as the filter, the drain plug, or the sump gasket.

Engine oil looks nothing like water, granted. However, it might be difficult to see underneath the car in darkly lit spaces. You might not know until you’ve moved it.

An oil leak will need immediate attention. Before driving, check the oil levels are still above the minimum using the dipstick. You’ll then need to go straight to a mechanic.

Transmission fluid is an oil used to lubricate the transmission, also known as gearbox oil in many other places worldwide.

If it’s leaking, transmission fluid will drop down from the transmission itself. This is bolted onto the engine, so it’s most likely near the front of your car.

The best way to identify transmission fluid is by smelling it. Don’t let any of it get on your skin or clothes because it smells awful.

Again, check the levels before moving off. You’ll need to go immediately to your local mechanic to prevent further damage. Stop and call for breakdown assistance if you notice the gears feeling jumpy or sluggish.

Why Is My Car Leaking Water Underneath? Conclusion

There are many possible reasons why your car could be leaking water. It could be something completely innocent. Equally, there might be something to think about more closely.

If you can establish that the liquid underneath your vehicle is indeed water, pure and simple, there shouldn’t be any problem. However, it may still be worth having the coolant system checked out if it’s near the front. Just to be on the safe side.

If you’re ever in any doubt, don’t be afraid to take your vehicle to your local mechanic. Take pictures of the puddle when you notice it, and tell them exactly where it was underneath your car. They’ll be happy to take a quick look for you to make sure everything’s in order. 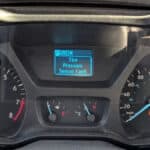 Tire Pressure Sensor Fault Meaning And How To Fix